Average score from 3 reviews and 15 ratings 82 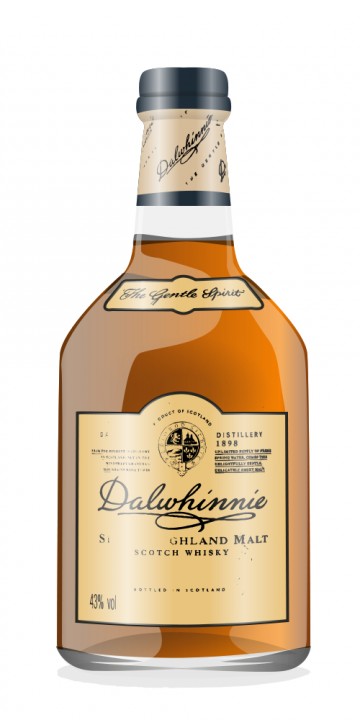 A very drinkable dram. A really good example of a DE.

The nose starts off as sweet soft maltiness with a very subtle whiff of smoke. It then gradually reveals some notes of blackcurrants and plums. Even more fruit flavours develop as it sits in the glass - red berries, strawberries and a creaminess is hidden there too.

Try and imagine a fruit salad of blackberries, redcurrants, blackcurrants, raspberries, strawberries with cream poured over it. Hold this fruit salad over wood smoke for a few seconds and that basically summarises this whisky. :)

The finish is long lasting, with lingering sweetness and a slight dryness.

I've always liked the 15YO as a go-to everyday whisky. This Distiller's Edition ramps up another notch in quality and is excellent.

Great review, really descriptive! I can almost taste it! I had seen this around and had been sitting on the Fence but this is going to make me stick it near the top of my "to buy" list now.

Bought this after being introduced to dalwhinnie 15 as one of my first "proper" single malts, to contribute starting my ongoing malt adventure.

I was very pleased at the time (2005) and would rate it a tad above 90 from memory. I then decided for my first purchase of Dalwhinnie, that i would try something different. Seeing that there isn't too many standard bottlings my eyes set on the Distillers Edition (DE).

First things first, this is a few years older than the 15 (obviously) but their seems to be younger stuff in here too, no doubt from the 15, but maybe some younger still, anywas this is all speculative. To the Tasting notes.

Nose: A fairly uneventfull sherry creeps in (oloroso) unassuming, followed by some ripe apple and pear/pear juice that then is replaced rather swiftly by some caco, malty biterness, with also some bitter tobacco albeit faint.

Taste: I must stress how dissapointed i was after the initial discovery of the 15, and what a good quality malt it was. Instead of a wonderfull honey complexity you get a "mellow" manuka honey with some sherry "tangy" dates. The developement can be spelled out by APPLES...and more apples. This is the slightly redeeming factor about this malt, you get the ripe apple from the nose here evolving into zesty red delicious apples then climaxing into a decent taste that can only be described as: Juicy Apple Pie. Some manuka honey exempts itself now and again with it.

But instead of continuing this decent devlopement, the Finish then goes all over the place with some clove, malty-cereal sugars and some slight oak bitterness. None of them asserts itself.

Wanted to like it as Dalwhinnie can be great, i would recommend the 15 standard heart-warmingly over this one, although the D.E has its moments, but ends up being quite uneventfull, boring and just a bit messy... shame.

Bought a bottle of this a few months ago, and opened it this weekend with great expectaions (I'm a huge fan of the 15 yo).

I must say that I agree completely with your review. I was very disapointed with this one.

Sorry to hear it still hasn't improved. It's sad especially since, like you, i am a big fan of the 15 and it's a malt (and distillery alltogether) that gets mangled on this site, unjustly so. I allways give respect to people appreciating dalwhinnie, not because you HAVE to like it, but it winds me up when people call it "bland", which it's not! Is the 15 still holding up good these years? Was thinking of trying it again and maybe do a "re-review"