@Victor Have you tried putting copper (a shiny new penny?) into a decanter of sulphured whisky? I know some recommend this for wines with the stench from reduction. I’ve never tried it myself.

@Nozinan I did think of trying out a coffee filter to attempt to filter out the charcoal. I am not a coffee drinker. So I may have some leftover filters in my house, but I have not yet located them. If I can turn some up, I will try one out.

@MRick bravo! You have just described my next planned experiment at sulphur reduction. Copper is what takes sulphur out of distillate during the distillation process, so copper should also bond to sulphur in matured whisky. 51 years ago I kept tropical fish which encountered a parasite, flukes. Copper pennies in the aquarium were a recommended remedy which I tried out then to counter the parasite. I didn't get a cure from the copper, but I was amazed then and now that a few pennies in the drink were reputed to be powerful medicine.

Life is too short! Winter has served notice and Christmas has passed. Brief days and long cold nights require a remedy capable of bringing a smile to my face and warmth to my core.

This is my favourite whisky, a home vatting of three delightful single malts, perfectly proportioned to deliver the desired escape.

Thanks to @RikS for the inspiration for the creation of “The Dram of Desire”. His detailed description motivated me to prepare his perfect contemplative dram. Although it awaits his approval, I have no doubt it will meet his expectations. My personalized version is slightly less smoky and every bit as dreamy.

about one year ago 7Who liked this? 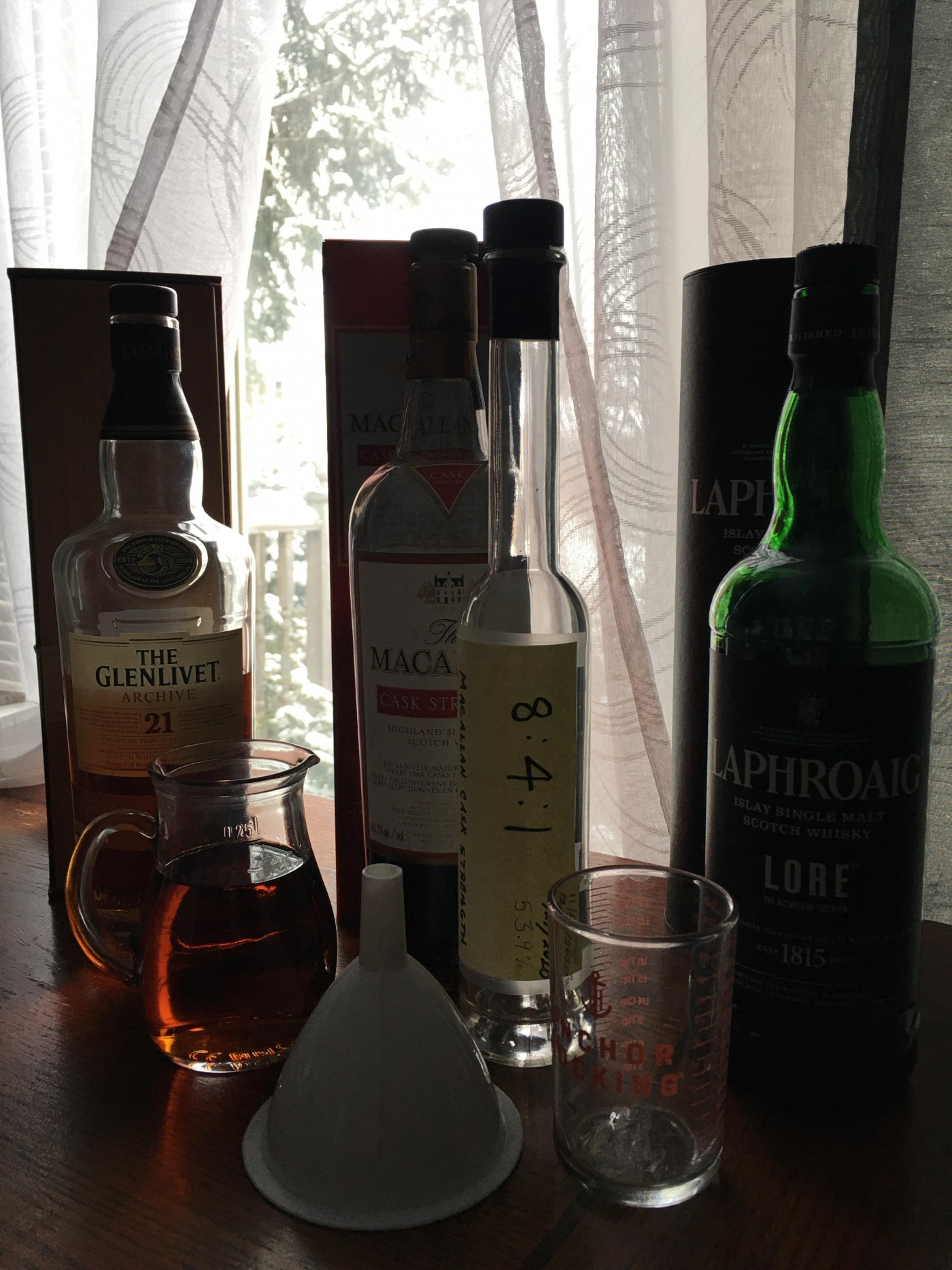 @paddockjudge I'm pretty sure it would be the best I'll ever have tasted... being far away, though, the fact that I made a humble contribution inspiring you to create something which is now giving you joy during Xmas... - that in itself is an absolute delight to read! Merry Xmas and Happy Holidays to you, and all the Connosr-ers!

Experiment Update: on 12 Nov 20 I undertook the experiment to see the effects of activated charcoal on heavily sulphured whiskies. I put activated charcoal in small bottles of Tomatin 15 Tempranillo, a very good whisky which long air exposure revealed to have serious sulphur flaws, OB Mortlach 12 yo a whisky which I sampled which was excellent, but the batch from which my bottle originated was horribly sulphured, and Glen Moray Port Cask, the most heavily sulphured of the three, and, for me, painful to drink.

Now, after 9 months: the activated charcoal has finally settled to the bottom of the bottles, leaving an oddly slightly gray clear colour where the colour had been black after the addition of the charcoal. At this point sulphur is almost totally imperceptible in the noses of all three of the whiskies treated. In the mouth the whiskies still show a little sulphur, but are much improved. I would estimate the reduction in sulphur taste and bitterness in the mouth to be between 70-90%.

Bottom line: all three of these treated whiskies are far more drinkable to me than they had been, but this is a lot of work and waiting to go through to get there. For someone with an extreme sulphur aversion, as I have, this is a possibility if one prefers to drink one's own whiskies rather than throw them out or give them away. Most people would probably not want to put up with the mess, inconvenience, and waiting involved in this process.

Concluding comment: this has been a very educational experiment.

9 months ago 6Who liked this?

@Victor Brilliant experiment. Going to try this with my old bottle of Deanston amontillado.

@Victor, excellent intel! I too have some bottles that need the charcoal treatment. I was thinking of pouring them through the Britta filter....jug of whisky anyone?

Degree of sulfur sensitivity?...I get sulfur in Glengoyne 21 YO.

@Victor Interesting results there. Great that ir significantly reduced presence of sulfur but I'm wondering if the charcoal would have any other effect though. Would there be other changes such as a decrease in other flavours/notes from other chemical compounds adhering to the charcoal? Did it alter the mouthfeel or texture? I wouldn't have thought activated charcoal was specific in removing solely sulfur compounds. Any thought on that?

@Hewie yes, I'd say on first impression that the activated charcoal does seem to thin out some of the flavour aspects in the treated whiskies. The noses, especially, have lost a lot of oomph and seem rather non-descript after treatment. Palatal flavours seem only slightly diminished, however. This is a rescue operation, after all. We may have to amputate an arm to save a life. I much prefer the "after" version of the treated whiskies. Now for those who are not sulphur sensitive there may have been no issue to begin with, and the treatments would not even be seen as desirable. .

Why not drop a penny or 2 into the bottle? Aren’t copper stills designed to inactivate sulphur?

Sadly we don’t use pennies in Canada anymore

Would just the copper do it or is it copper+heat? Trying to find out but my Google-Fu is failing me. Figured the heat might be a factor as heat is involved with the distillation in the copper stills. Maybe just copper would do it but the heat speeds the process?

@Nozinan at some point, probably soon, I do expect to try that experiment as well.

@TracerBullet I do not think that heat is required.

@Nozinan @TracerBullet @Victor saw another experiment on another forum with someone using clean copper wire and the guy reckoned he had good results. No heat as far as I am aware. He claimed the copper blackened or changed a darker colour as a result also indicating some sort of reaction. Main point is it improved the whisky in his opinion.

@Timp sure, that blackening would be copper sulfide.

But to get more info on this, I called my dad. He is a retired chemist so I figured he might have a bit of insight. He agrees that the heat would probably accelerate the reaction but that it would still occur without it. I told him about the charcoal experiment and he thought it could remove the unwanted taste but would also remove tastes that you may want to keep. As far as putting copper into the whiskey, he said that there might be a reaction but if the concentrations of sulfur compounds were very low, there may not be enough to even start a reaction in the first place.

He did say that if anyone is not happy with the sulfur taste in any of your bottles of whiskey, he would be happy to send you his address so you could mail him the objectionable bottle!

@TracerBullet I look forward to playing this out firsthand at some point. Copper Sulfate, CuSO4, is blue in colour, whereas the sulfides, CuxSy, are black-gray. If the guy with the copper wire was getting black deposit, that would not have been copper sulfate. I am a little more cautious about using the copper technique than the activated charcoal, because more than a little copper is toxic to the human body.

Black-gray tarnish on silverware is mostly Silver sulfide. No heat or moisture is required here, just presence of the metal and the sulphur in the air.

@Victor You are probably correct but every thing I am reading says this:

Worth noting is that sulphur is almost untastable in a 30 yo Craigellachie. Why? Well, because the whisky spent 30 years in a cask that was once upon a time charred, generating...activated charcoal.

Ah yes. I read about the treating of casks with sulfur candles to kill bacteria and mold. And of course it is common practice to use sulfur when making wine (sulfur fines). I would think that is a choice in the whiskey making process as the distiller would have to be ok with the finished product. (Not that everyone else would be). As far as the copper wire in the whiskey, the color could be attributed to a reaction with sulfur but it could also be oxidation as the color of copper initially turns a dark brown to black before getting to the nice blue green color we usually associate with an aged copper. And I agree that activated charcoal would filter flavors but it would not target only sulfur. It would filter everything until it was saturated and then it wouldn’t filter much else. So it may reduce the sulfur taste but it would change other flavors as well. In any case, I guess it is all subjective. I’m not arguing that we shouldn’t experiment but we do need to know what we are effecting when we change things. E.g. is the charcoal removing only sulfur or is it altering other flavors as well.

@Victor @TracerBullet @Timp - Chemistry was never my strong suit, nor an interest in my school years, but of course, now I am fascinated with the chemistry of whisky distillation. I should have paid more attention in school. Oh well, it's never too late to learn. Thanks for all of the discussion on this topic. Very interesting!

Here’s a decent article about what happens in the barrel. Sadly it does not touch on sulfur. popsci.com/what-happens-in-whiskey-barrel-…

@bwmccoy I didn’t go academically like my father but I think a bit rubbed off. His concentration was more on radiochemistry and he worked for the Department of Energy but chemistry is chemistry so he doesn’t know distilling first hand but he obviously understands the chemistry behind it. I tend to be very critical when it comes to experiments because my dad was methodical with things. I apologize if I came off critical about the sulfur experiment but that’s how I was taught. Sometimes people jump to assumptions and they may be correct but I am always critical and want to look into the methodology and make sure it’s based on real science.

If you ever want to go way off topic and talk about nuclear power plants, I’m your guy!

Not sure it adds much to our conversation but interesting none the less.

“To start with feints are pleasant and biscuity, then they become more porridge-like and leathery, after which they pass through a brief honey phase. Soon after this they deteriorate rapidly into unpleasant aromas reminiscent of sweat, stale fish and vomit. In the language of chemistry, the acceptable cereal feints are organo-nitrogen compounds, while the unacceptable feints are organo-sulphur compounds. The aromatic intensity of the latter can be very strong (detectable one part in a trillion!) and is often describing bed as sulphury, rubbery or egg-like”.

@MRick in my last sentence “describing bed” should read “described”. I have no idea how to correct a post!

There may be too many port barrels lying around at the Hiram Walker distillery….. why not $auterne$? 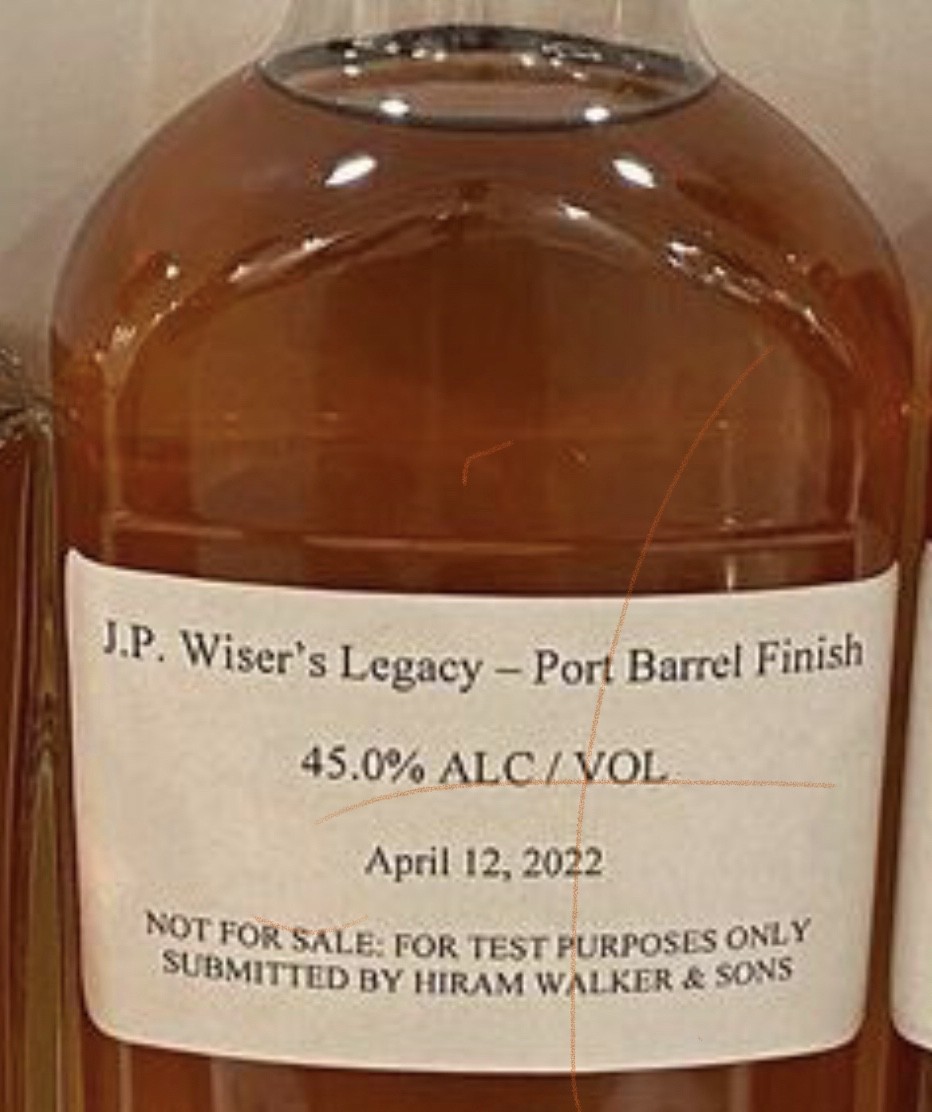