Average score from 2 reviews and 2 ratings 92 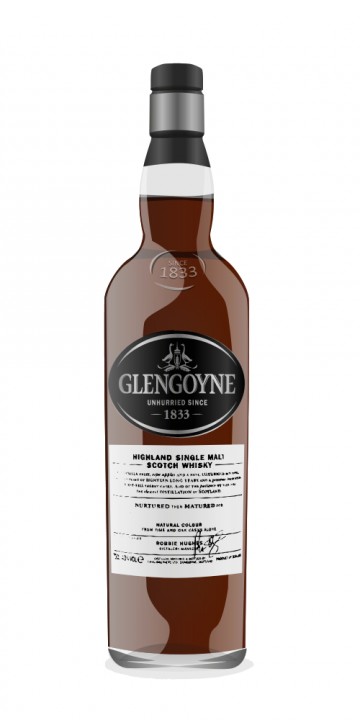 I'd said at the start that I wouldn't be doing heaps of tasting notes on all the whiskies tasted due to the fact of something I'd seen on Malt Maniacs shortly before my trip, by another whisky blogger, who'd commented that he'd found himself all too often focusing on the technical aspects of a whisky, tearing it to pieces, as opposed to just enjoying it.

I realized that he was correct in stating that so many whisky geeks do this, that we focus on tearing a whisky apart in order for our blogs and writings to the point where I sometimes just forget to enjoy the bounty in front of me.

To that end I'd decided that I wouldn't take notes on all the whiskies I tasted on my vacation, that I'd only do write ups on a few select special whiskies, and that I'd only do that as long as there was one or two stand outs in a tasting, not when the entire line up was brilliant, in order to focus more on a single whisky or two.

The first distillery that I visited was Glengoyne, I'd booked the ultimate tour for 125 pounds per person, on top of that I'd payed an extra 50 pounds to sample the Glengoyne 40 year old and the Isle of Skye blend 50 year old.

The initial 125 pound tour was, to be honest, a complete disappointment. We were informed before hand that we'd be blending our own whisky, which led me to believe that we'd be doing this with different cask samples of Glengoyne.

To say this was a disappointment does not do it justice, devastated was more like it. I was so upset with the entire tour, that I almost canceled the 40 and 50 year old whisky tasting, figuring it was going to be just as much a let down and rip off.

Feeling very dejected after our initial tour, I literally kept opening my mouth to say "no thanks, I'll just take the refund on the connoisseurs tasting."

Something held me back. I'm not sure what, but I'm glad that whatever it was, it kept me quiet.

Our guide, after the main tour, goes and grabs the bottles of Glengoyne 40 year old and Isle of Skye 50 year old blend and comes back with a glass with each whisky's name on it. A fluted glencairn style glass.

He pours myself and my brother in law, who is also doing this part of the tour, a sample of each and lets us have it.

Let's start off with some history. The Glengoyne 40 year old is the oldest Glengoyne to ever be released, distilled in 1969, aged for 28 years in second fill hogshead barrels, and then a further 12 years in first fill sherry buttes, bottled at a cask strength of 45.9% with 250 bottles produced world wide. It runs at roughly 3500 to 4000 pounds per bottle.

I must admit, I'm really eager to sample this whisky!

The nose is quite lovely and nothing like any of the earlier Glengoynes that I sampled over the tour, which were to me, overly sweet, at times almost sickly so and not to my personal liking. This whisky is in a whole new league.

Strawberries and cream, chocolate, apples, raspberries, cherries, creme brulee, raisins, sultanas, a little bit of earth and of course the oak. It's quite a fruity nose and it's a nose that I'd be happy to enjoy for many an hour.

If the palate is half is good as the nose I'm certainly in for a treat, in fact the nose has me so pleased that a good bit of my ire at the preceding tour is slowly dying down.

God I need to take a sip!

First off, you get the oak, but it doesn't over power the whisky at all, as sometimes occurs with single malts over 25 or so years old. Chocolate, bananas, honey, coconut, apples, sultanas, raisins, cinnamon, cloves, nutmeg, strawberries, cloves. Incredibly complex and beautiful. A whisky that I'd LOVE to own.

And the finish is glorious, long and lingering, just staying on the palate for ever, to the point where you're still tasting it 10 minutes later. Strawberries, cinnamon and nutmeg just linger forever.

Ok this whisky has just gone a long ways toward making me more favorable to Glengoyne, however talking to our tour guide I'm honest and tell him that in no way, as lovely as this whisky is, feel that it's worth the six to seven thousand US dollars that it'd run. He agrees and says that no whisky is worth that price. This will be a theme heard again and again in the distilleries that no whisky is worth that sort of price point.

However if I had enough spare cask to pick up a bottle of this would I?

However I would pass on the Glengoyne master blending tour and jump straight to the connoisseurs tour. If you ever get a chance to sample this whisky, do so!

Finnish - Nice and smooth and mellows out slowly.