Average score from 2 reviews and 8 ratings 88 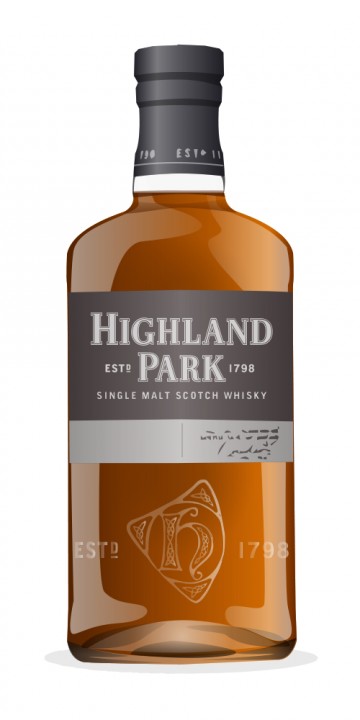 This 12 Year Old Saint Magnus, the second release of the Earl Magnus trilogy, is the only one still available from the HP website (but then do not ship outside the UK), because of the large number of bottles. The other two, the 15 Year Old Earl Magnus on 5.976 bottles and the 18 Year Old Earl Haakon on 3.300 bottles, are all long gone. They fetch outrageous prices at auctions. In this vatting, primarily Spanish oak was used, of which 20% first fill.

After the initial alcohol burn, the nose offers new leather, dried citrus, heather, apples in caramel, honey and pepper. But the whole is rather sharp and young. After a while, I get some earthiness and grilled pig, covered in honey and a slight smokiness.

The palate starts rather dry, but very spicy, on cinnamon and ginger. Again apples in caramel and dried oranges. Liquorice, woodsmoke and a handful of nuts. A lot of sherry, even turning somewhat bitter.

The finish is very long, drying and (too) bitter towards the end.

This is an interesting Highland Park, but not earth shattering. The price is exactly that, if you consider the fact that this is a 12 year old whisky, after all. The unique packaging does not change that fact.

Last year when the ‘Earl Magnus’ 15 year old whisky was released by HP, i was very keen on getting it, and fortunately got hold of a bottle (sans the wooden box, which made the package lighter to send over the pond). The entire EM stock was sold out in less than a day on LFW, and as much as i like the 15 year old, it’s not a classic HP at all, and i find myself visiting it rarely (we did sample it again a month or so back on our HP summit). When St. Magnus was released, i debated with myself whether to shell out a whopping 86 quid (before shipping) for a 12 year old (even thought it’s bottled at a nice 55% ABV). I decided not to, and watching by the stocks still available on many online whisky shops, most people didn’t think this one is a great deal at that price, as it’s still available a few weeks after the Initial release and not out of stock like it’s older brother. My good whisky friend and WI member, Igal T, did get for this bottle (after missing out on the EM, by a few hours) , and was kind enough to bring this one with him to one of our informal meetings at Richard’s. I was not expecting much , but when i did samples it then, it blew my mind. It was “The” dram of the night (well, it didn’t have a lot of competition, only two very nice Japanese whiskies – a Suntory Hibiki 12, and Nikka 12). I really liked it back then, and took a wee samples home (thanks again, Igal!) to review it in a more relaxed manner. Here goes:

Palate: Big impact. Wood,spice, the dried fruits. quite spicy, chilly on the sides, sherry, and smoke , peat. this is one of the more peaty HPs I’ve had. very enjoyable. well made, complex, and yummy. Bring me more. i am in love.

A true Ace. This one is a really really good 12 year old, a lot of sherry, and the smoke/peat combination is much bigger than other OB Highland Parks. IMHO, this is better than the EM 15, yet as far as price is concered, i do think it should be priced around 60-70 quid and not at 86… If you can get hold of one, BUY.

Wish I had this one. I also debated purchasing this one but I opted for a couple of other things. Wishful thinking, but I hope I can still find a bottle in a few months.

There are quite a few bottles currently available here in Ontario at The LCBO. 179.00 a bottle but well worth it.