Average score from 9 reviews and 53 ratings 84 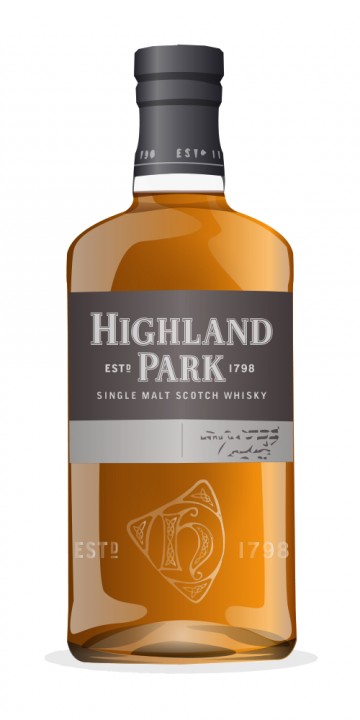 When nosing this whiskey, I can't help thinking that I'm smelling a really good blend. It reminds me of Teacher's, except it has an extra roundness, affability, and maltiness that sets it apart from the blends.

The nose has tart citrus, smoke, peat, flowers, and honey-sweetness.

On the tongue, there is no disappointment whatsoever: sweet, salty, smokey, fruity, smooth.

This 15-year bottle ought to have the same reputation as the 18: as a good all-rounder. It may not have the richness of the 18, but it is undoubtedly an all-rounder, so much that I would have no way of making a regional placement if I tasted it with a blindfold on.

Not a typical Highland Park aroma, bittersweet including malt, sherry, liquorish and treacle.

The bittersweet warning signs on the nose are evident in the flavours too, a cloying sweetness combines with the bitter notes of liquorish to make an unhappy ensemble, for me at least. The finish brings some solace as the bitterness wins out and provides a nice clove enriched spicy end.

A malt seemingly at odds with itself. However this bottle has sat on my shelves for too long for this particular version to be around for anyone else to buy. Hopefully more recent bottling are up to the “Parks” usual standards.

I read the descriptions of this whisky and often is characterized as having primarily heather honey. Myself being from The Caribbean (Puerto Rico), and now residing in Miami Florida, really have never come across anything with or related with heather. However, what I pick up in this wonderful single malt is reminiscent of my hikes up the peaks of the El Yunque rainforest-- A protected national park 45 minutes east off San Juan. AS you climb up, you are surrounded by damp vegetation like ferns and moss. colorful plants like Birds of Paradise and orchids.

Palate: This is a Chameleon whisky. Starts off with the honey center-stage, very assertive. Warm. Caramel, A Spanish Natilla develops with that ever-so pleasant burnt sugar on top. The sherry is there, but way in the back. The sultry sea-spray envelops ever-so slightly. there is a hint of milk chocolate. Slight oak. All wrapped in a blanket of damp, earthy, rain forest flowers.

Finish: Sweet, caramel, Those damp rain forest flowers again blanket the tongue, reminding you of the flavor that you just swallowed.

Sherry monsters don't " tickle my fancy," or "Pop MY clutch," or "Butter my muffin." They just don't really do it for me. I like something more balanced. This HP15 arrives thick and full flavored, but it develops in a delicate fashion. Really hard to describe. This is what I always look for in a whisky. I guess that you know by now that I really like this dram.

You need a small splash with this to open it up for the nose. It doesn't have the sea breeze flavor you get from from some of the islays but it is there subtlety. I prefer the taste of Bruichladdich Laddie If I'm looking for the flavor from the sea so prevalent with the Islays

Nice title for your review

I think this whisky is underrated. Yes, it's true that the nose isn't spectacular but it isn't as thin as many reviewers say in the mouth.

I drank a glass from a new bottle, so it took about 25 minutes to open up. Very nice once it did.

Finish: Medium. vanilla extract, clover honey, toasted barley, and a touch of oak. Does not end as dry as I had expected from reading reviews. Neither does it end bitter. A nice, sweet finish, but not a "sherry" finish. I must say, that sherry is overdone these days in a lot of whiskies. It's not everything it's cracked up to be. Drinkers in the 1970's understood that.

In my estimation, at 40% this scotch does not require any water added to it, especially if one has the patience to wait 20 minutes before getting into it in the glass.

I suspect the sherry fad will fade a little with time when people rediscover the joys of a whisky that doesn't need to do backflips on your tongue in terms of complexity to qualify as a truly delightful taste experience. Sometimes simpler is indeed better, depending upon one's mood. And for this, HP 15 should be waiting in the cabinet--a willing accomplice. Yes, I know there may be some sherry casks involved in making the 15, but they really don't stand out. In fact, I would be interested to learn if bourbon American casks were used, or European oak (sherry) casks. That would be interesting to know. I suspect European, but the sherry is really dialed down nicely.

The mouth feel after thirty minutes was really quite nice. I would rank the satisfaction index even higher than the rating. It's true that this HP isn't as complex as the 18, but it is quite delicious.

I also don't care what other reviewers say: the 15 is certainly a more interesting whisky than the 12. Call me a purist, but I like the fact that the 15 does not have fake coloring in it. But what's more, it is more exotic and interesting as a whisky than the 12, which has a stale mundane quality in comparison with the crisp, refreshing almost turpentine tang of the 15, mixed with a really satisfying sweet finish. Drinking it reminded me of my days painting with oils in college. I really miss painting and drinking this whisky gives me some of that nostalgia of the sharp tangy smell of oil on the canvas with linseed oil (turpentine) nearby to clean brushes and things.

I just got me a bottle yesterday and I gotta tell you, this is exactly what I look for in a single malt. And the ever, unique flowery mustiness of that Orkadian peat, mm,mm,mm! yummy!! I will post my review in the coming days.

"Do backflips on your tongue," ha ha. The comparison to turpentine is a little off-putting to me. I do like the smell of oil pastels, though. Anyway, Connosr reviewers are making this sound like one interesting dram.

The reviewed bottle has been open for 2 years, the last 11 months gassed for preservation. The bottle is 80% full.

Nose: an "old sherry" nose, especially after 2 years, raisins, prunes, grapes, but also cooked apples. The nose is more rounded after much time of the bottle open, but was always a very sherried nose. There are hints of vanilla, and the malt is mostly blended into the background. There is some sweet with a strong dry balance. The smoke noticeable in the Highland Park 18 YO is virtually non-existent here

Finish: the flavours hold up a long time and leave a nice warm sweet wine-y glow

Balance: I will say it again: I consider this whisky to be a sherry trip. It has its own special mood in which to be maximally appreciated. Sweet and dry inclines to the sweet side after the bottle gets some air. Highland Park 15 is a little more dry and austere when the bottle is first opened. For me, the mood to drink Highland Park 18, 15, and 12 are three completely different moods. They are all nice in their own ways

It has a distinctly different barrel program than the 12 & 18, and this can be seen in the color of the whisky, which has a slightly greenish hue. Check the videos at the HP site on these whiskies, where their rep talks about this and the different tastes; well done videos! I agree the 18 is much better than the 12, so I save up for the 18. The 15 is very different from the other two and blind I wouldn't say it was HP, but it is quite good.

Victor - yes, the 18 definitely improves with air! I was sad to see my previous bottle disappear, as it had become so delightful in both nose and palate. I plan to open both the 15 & 18 soon that I have been saving.

@tabarakRazvi, I do like the Highland Park 15, but I consider it to be a little weird, because it doesn't really taste close to ANY other Highland Park expression I have had. Is there smoke here? Apparently none at all, and if there is any peat here it is nearly imperceptible. @Nock had some of this with me Friday night and he commented that he thought that there was no peat in this Highland Park 15 at all. Of course @Nock likes a lot of peat, and smoke, in his malt whiskies.

I do not know whether the spirit is just the same as in the 18 YO, but the Highland Park 15 YO and 18YO are two VERY different whiskies.

Highland Park is one of those whiskies that should be in every cabinet, even if it is only just the one. Their standard 12 Year Old is nice and friendly priced. This 15 Year Old has a bit of a different composition, with a larger part of first fill American oak than its younger brother.

The nose is honeysweet. Almost no smoke or peat to speak off and even the salt stays behind, to make room for honey, vanilla and loads of caramel. Slightly floral with some heather. Petit Beurre cookies. If this was a boxer, it would be a bantam (google is your friend). Only after 5 long minutes do I recognize any HP in this. The citrus develops the most.

It is creamy, but lacks punch. Not a lot of body. All citrus and caramel, basically. Mildly spiced. Some more smoke, now. And grassy. Heather again. Gets better, but never gets big.

The finish is medium long, again on citrus. Rather drying.

This is a bit of a weird HP, if you ask me. The 12 Year Old easily transcends this one.

HP spokesman Gerry Tosh explains in his video posted below that it's American White Oak for the 15 yr, in comparison to the Spanish Oak used to age the 12 yr, and 18 yr expressions.

I do agree though - the 15 yr is indeed different, and unique from it's brethren, but I really enjoy it nonetheless.

Thanks, Mark, for reviewing this under-reviewed HP. I've been tempted to try it, but I think I'll wait until somebody else is buying!

Palate: Malty, smoke and peat and dirty earth with some zest. Not very complex.

As much as i am a fan of the 12 and 18, this wood profile IMHO is not the one HP shines through. i do prefer the Spanish oak profile. It does remind me a bit of the HP “Thor”, but of course less complex, and not as interesting. or some reason i can not find this one in many online retailers now, i would opt for other malts at the same price range.

I think many would agree with you that they favor the 12 yr, and 18 yr expressions due to their more pronounced sherry influence courtesy of the Spanish Oak casks.

That said I really do enjoy the 15 yr HP; something about it makes it unique, and truth be told it'll always find a spot on my shelf - even if it's a hard whisky to find.

Strange, I was at the Toronto Whisky Live festival last night and the HP booth staff were saying the 15 is bourbon cask matured only, whereas the 12 and 18 use sherry casks in combination with bourbon. I actually don't like HP12 and thoroughly enjoyed HP15, long story short, I enjoyed the peat and the lack of smoke compared to other islanders. So HP15 is not on my wishlist...

i think the higher abv number in the us is to compete with bourbons, which typically are 45%. just a thought. no other reason though really. i've been typically buying cask strength bottles recently likr the abunadh the oogadal and am interested in picking up next the astar and the nadurra (and the abunadh again). funny since these are all nas bottles.