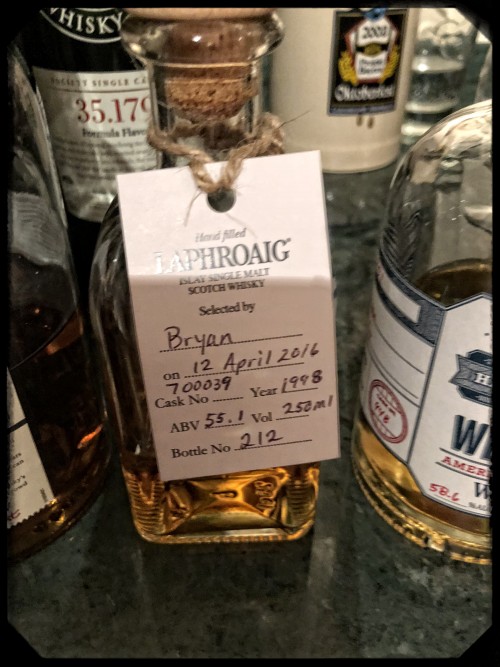 While this is an exquisite dram, it is not a sherry bomb. It is a more subtle, refined example of a sherry cask, southern shore Islay whisky. Also, I did not detect the typical medicinal, iodine characteristics that you would expect from a Laphroaig.

Based on the color and the lack of it being a sherry bomb, I am assuming that this is at least a second-fill cask.

Nose: The picture I get nosing this whisky is the first whiff of smoke that you smell when walking into a oak paneled room with a roaring fire in the fireplace. Then after sitting down, you smell the leather of the high back chair and the leather bound books in the oak bookshelves along one of the walls. Followed, by the sweet aroma of the sherry wine in the glass on the table next to the chair.

Palate: The sweet sherry influence is front and center followed by the oak making its presence known mid-palate, ending with damp ash.

Finish: The sweetness lingers momentarily before leaving smoky ash on your tongue for a long time.

This whisky is very well balanced in all aspects.

END_OF_DOCUMENT_TOKEN_TO_BE_REPLACED

@bwmccoy, thanks for your lovely review.

@Victor - Thank you! Here are the answers to your questions.

@Victor - You're welcome! I hope the info was helpful.