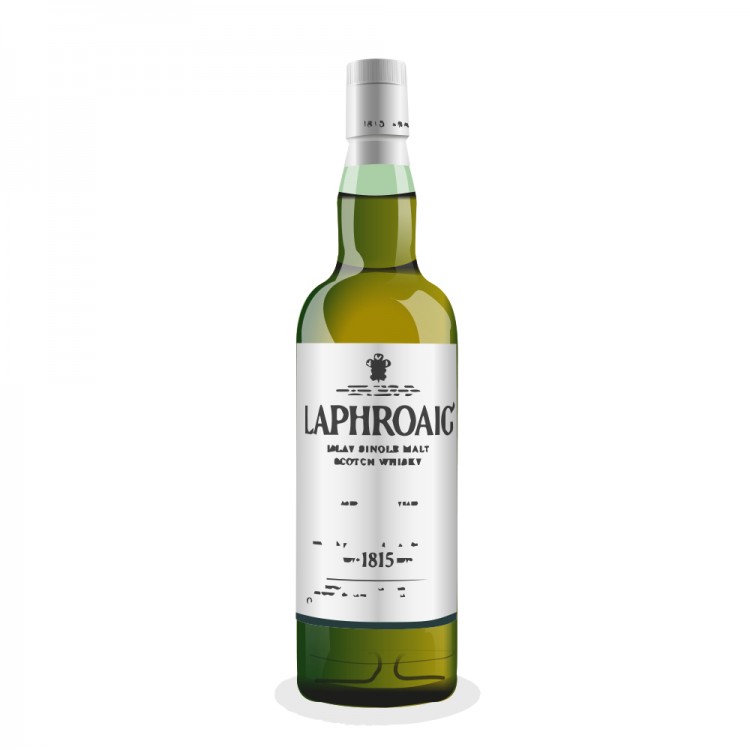 Laphroaig, a whisky that conjures strong feelings, either of love or hate, in both the hard core whisky drinker and those just getting into whisky.

You either love it or hate it. There's not generally an "meh" factor to this bad boy.

I remember very well my first time encountering the Laphroaig 10 year old while enjoying a few drams with my father in law.

It was a bonfire in aroma and palate, taking me back to a time when vikings roamed the land, raping and pillaging and generally doing the sorts of things that vikings do.

I was chatting with the importers of Laphroaig the other day, regarding my whisky club and other fun whisky things and they mentioned this brand new Laphroaig. A Laphroaig that immediately grabbed my attention when they described it.

Coming in at 40% abv which made me a little sad, but all those casks had my interest. I reckoined this would be a complicated little beast.

So after the meeting when I got home I cracked open the bottle and immediately the sweet smell of peat filled the room, to the point where I could smell the whisky four or five feet away.

Holy crap! That bad boy has got a hell of a nose on it!

Into my special glencairn tasting glass it goes and I can still smell it.

BBQ pork, iodine, vanilla, soft peat and smoke, much softer in the smoke and peat then I thought it would be, lacking the typical peat reek that Laphroaig is known for, sea salt, mild TCP, dark fruits, cherries.

Let's try it and see what we will see!

A soft finish with some medicinal tones and lemon candy ends the whisky.

Where does one start?

Well I already know people will whinge that it's a No Age Statement whisky and that it's coming sitting at 40% abv as opposed to something higher. Two things that drive the whisky geeks nuts most of the time, and to top it off it doesn't have the monster Laphroaig intensity that you either love or hate. It actually feels like the distillery is trying to create a new whisky, more geared towards drawing new and less experienced into drinking more of the Islay style whiskies. I could be full of crap here, but it's my sneaky feeling.

And don't get me wrong, that's not a bad thing at all, in fact it's a great thing as far as I'm concerned. The more people who are drinking whisky, especially the higher end whiskies, the more the distilleries will try and meet that demand, which in general leaves me a happy man!

Don't expect a knock your socks off, take your breath away, whisky in the Laphroaig Select Cask, however I personally think it's a solid quaffing whisky.

END_OF_DOCUMENT_TOKEN_TO_BE_REPLACED

@SquidgyAsh, thanks for your review. So this Laphroaig Select Cask is sort of a 'Laphroaig Light'? I am looking forward to getting a sip of this one day, but if what I want is 'Laphroaig Light' then I might also be tempted to buy Islay Mist 8 yo at 1/2 the price.

@Victor I'd say that's a good description of it, Laphroaig Light. It's not bad like I said, but it doesnt have the intensity that I normally look for in Laphroaigs. If you've got a cheaper alternative (which it sounds like you guys do!!) I'd probably go with that whisky over this one. It's worth a try if you see it in a bar, but I likely wouldnt purchase a bottle of it without trying it before hand.

Yes, I'll wait until someone I know has a bottle of Laphroaig Select before taking a sip. Islay Mist 8 yo is supposed to be a Laphroaig-based blended whisky. It is quite pleasant, tastes like a light Laphroaig, and costs a little less than $ 20 here.

I am very saddened by the direction Laphroaig is heading into. I already posted my disappointment with the PX Cask, back in June 2011, and some of you might recall I actually sent a sample to the distillery, who (via Jim Beam PR) very nicely replied that this was compatible with the new direction Laphroaig was going into.

Luckily, single-cask, cask-strength, IB of Laphroaig are still coming out regularly (eg. from the SMWS).

It is a typical ploy of the food industry, and probably consumer goods producers in general not to raise prices but to give you less product for the same amount of money. You don't even notice for a while until you realize one day, hey, this chocolate bar used to be 200 grams, now it's 175 grams but the price has stayed the same. The whisky industry simply gives you younger whisky, at lower ABV, gives it some pretentious Gaelic name and charges just as much, often more, than their age statement offerings. See MacAllan for a good example, or Ardbeg Can you even get an age statement Ardbeg other than the 10 these days? Whisky is getting to be more about clever marketing of mediocre product than about actual belief in the product. Bullshit baffles brains, but not taste buds. Too bad.

@Frost thanks for that buddy!

@Oliver @BlueNote I agree with you my friends, but I hate to say it but this is the direction that most of the whisky industry is moving in :(

I've had my first dram of Laphroaig Select Yesterday. Indeed Laphroaig light! I'll stick to 10 YO in the future.