Average score from 1 reviews and 3 ratings 86 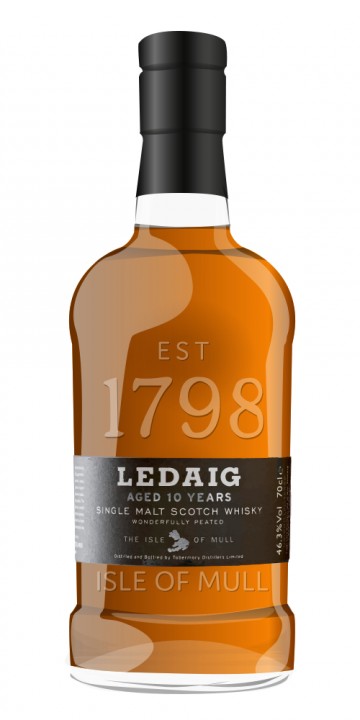 The pretty box says that this is a limited edition first bottling of the sherry finished peated single malt from Ledaig for the year 2000. The carton smells like my grandpa's schoolbooks! I found it at my favorite local liquor store in the same row as the Ledaig 10. I took it to the counter and the woman working didnt know what it cost. I told her it was in the same row as the 10, and I got it for the same price:) €37,-

Appearance: pretty, pot-still styled bottle. There is an Asian text on the back of the original logo, so who knows what travels this bottle made. The color is reddish gold and it has very slow legs

I didnt put any water in because its only 42%

Arrival: Takes a few seconds to drop in but then it does wonderfully. Mouthfeel is young and light in the beginning but gets hotter later while building up big flavors.

Palate: The nose gets transferred well into the aroma, but with a more pronounced smoke, black fresh fruit, red pepper, aged red wine, coals and ash and fire! Its quite dark and restless when it gets going and it keeps developing longer than I expected. After a minute in the mouth its still giving impulses. Its not sweet, its dry, but in a good way. The Nikka comparison is out of the window here, this is true old style, carefully crafted peated Scotch. Not through calculated science, but by a beating heart.

Finish: quite long for a non-age-statement whisky. Swallows easily with a gentle soft burn, soft but big hazy smoke, licorice, cashew nuts return with some dry vanilla, ash and the sherrytaste lingers the longest.

Conclusion: This bottle has been waiting for somebody in the shop for 13 years behind some newer Ledaig expressions. By drinking this, I get the feeling that the general taste for whisky has changed a bit. The modern Ledaig 10 is much sweeter than this one and its not even that sweet :p This one is not really balanced, but it doesnt matter because there is so much going on all the time. Delicate, but big and bold too.

I have tried the bourbon-matured version of this... very decent for the price. It is even, in some ways, better than the new official Ledaig 10 year old. It had a very crisp and fresh yet fusty and old barnyard nose. Ledaig seems to do well when matured in sherry or any other wine-finishes. I keep thinking of that Berry Brothers 4 year old Ralfy reviewed a few years back. Interesting find and a good review too :)

Yeah Id love to taste more different versions, but nowadays its quite difficult to get anything other than the ten. I saw a 15 in a shop lately but its kinda expensive :(