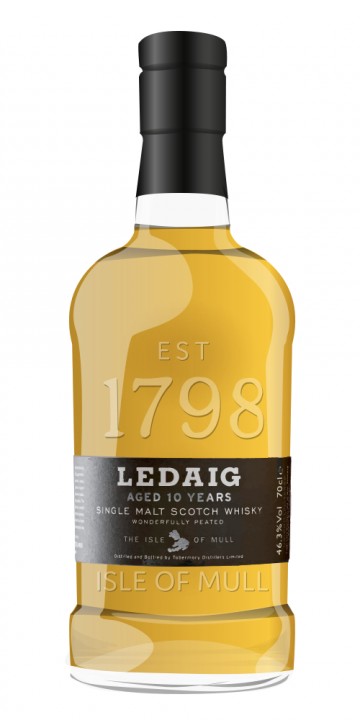 Last bottled in 2003, I was lucky to score this one in the shop closest to my house for a good price. I must admit, I'm a bit biased, I love Ledaig, and everything they made so far. After a few young ones it was nice to taste this spirit a little older.

Appearance: Looks natural although the box and the bottle reveal nothing.

Palate: Very slow arrival, but when it comes it comes. Big juicy honey, salted cashewnuts, that yeasty Ledaig buttery barley character, warm banana cake with cream, smouldering peat, fresh herbs and ashes. Everything from the nose is expressed (and then some) on the palate and even after 15 years the spirit shines bright. Its summery and optimistic, not dark and gloomy.

Finish: Herby peat, light tobacco and smoke linger on in a nice peppery glow for about 10 minutes.

edit: finish took longer than 10 minutes, after drinking a beer and eating bread I still taste the herbs and the peat.

Just wonderful whisky, right into my sweetspot. Yes, it would have been better at 46% but I fear we're not going to see very much older Ledaig on the market the coming years, so I'll be saving this for the -could be any day- special moments.

Reviewed is a Signatory bottling of this Ledaig – fairly certain I’m dealing with the same Scotch in a different bottle than pictured.

Palate: The nose was going for a knockout punch, but the fist halts inches from your eye and you’re relieved, delighted even, because you’re in second grade and this is the first time someone’s played this trick on you.

(A semiotic debate: can subtlety truly be ‘remarkable’? There’s something oxymoronic about this phrase, as subtlety is, by definition, kind of unremarkable. Maybe saying “remarkably subtle” is a bit like saying “very unique,” a phrase that has grated me since childhood. Unlike uniqueness, there can be varying levels of subtlety, but I think remarkableness could only really refer to the fact that something is surprisingly subtle, unexpectedly subtle, which this dram is. What I’m really trying to get at is that the subtlety here achieves remarkableness by being both a) at a high level and b) surprising in context.)

Finish: Like the “twist-in-the-tale” at the end of an O. Henry story. Rosewater. Mulling spices. And where are these fruits coming from? A dazzling array of berries – blackberries, cranberries, overripe cherries. They start off as dry, shriveled things and burst into juicy bloom – a film in reverse. Which brings me to my next point: “Wow them in the end and you’ve got yourself a picture, kid. Action!”

I think something is remarkably subtle if it subtle in such a way that it is worthing remarking on... ;)

Awesome review! Had a dram of this tonight and you are bang on.