Finished the sample of Glen Scotia 15 last night that @wierdo sent - would have reviewed it but have a touch of a cold and couldn't access the site.

Really enjoyed this; lots of fruit, toffee (especially on the development), sweet spices, coastal touches and some soft smoke running through it. The balance was excellent. A really engaging yet quite mellow sipper. I'd have marked this 89 or even 90 and will be putting this on the wish list . . .

@RianC after having a 3 pack of Glen Scotia Double Cask, 15, and Victoriana, the 15 was the best of the lot. I bought a full size bottle and I enjoy it - but then I had a dram of Springbank 10 after one of Glen Scotia 15 and it was no contest. The SB10 blew the GS15 away big time. Still a pleasant sipper though.

I’m on my third pour of A’Bunadh Batch 59 and it’s terrific. It’s much better than the Macallan 12 I reviewed. Maybe my problem isn’t sherried malts as much as the bitter wood tannins in the Macallan 12. This A’Bunadh is incredibly well-balanced.

Quite warm here so fancied a change from whisky.

El Jimador Reposado with dinner - this bottle has been open a year or so now with about one third left and it tastes and smells better than ever. Loads of pepper and something akin to an aloe note with herbs. Very nice and easy. One day I'll splash out on a top notch tequila! I'd also like to try the Blanco version of this to see how they compare.

Just opened my Cadenhead's Classic Rum after dinner - Oh the nose! I just love that dark molasses thing in rum and this has it in spades. Brown sugar, vanilla and a plethora of dried dark fruits with some sharp spices. Sweet but not too sweet. Feels like a 'natural' version of Pusser's Gunpowder Rum. Nicely drying on the finish with a touch of burnt sugar.

Catching up on what folks have been drinking...delicious! I haven't been able to partake as much as I would like but did have a nice dram of Scapa Skiren yesterday with a friend. Simple, uncomplicated whisky...not as much brine as I was hoping for, but an easy drinker of lemon-lime.

Cracked my 200 cc bottle of JD #7. I'm doing some charting and figured it would be a good introduction. Sniff test on first pour is promising. Smells like bourbon for some reason. I will reward myself with steps as I make it through stages of my report.

I think I will enjoy reviewing this one, and putting it H2H with the SBBP. This has a great bourbon nose, lots of cherry. The palate is a little thin but as a first dram (in a few days) I am enjoying it.

So much for being a high proof whisky snob...

@Nozinan Jack Daniel’s is bourbon according to their Master Distiller. He called it bourbon plus. I don’t hate most batches of Old No.7 I’ve tried. It tastes somewhat like banana bread with walnuts and chocolate chips to me.

@OdysseusUnbound @Nozinan - I'm somewhere between you two - I always get the banana note and lots of cherries! When it's 'on', and I'm in the mood, Jack can be a good friend!

I've tried decent Old No.7s but also had some foul stuff. Not yet had a bad MD version though and I've had about four over the last few years with three in the bunker!

Tucking into a small pour of Yellow Spot. It’s been an exhausting day...

@OdysseusUnbound Sadly, with a new puppy, we have no shortage of Yellow Spot here. And she's not even an Irish Setter....

@OdysseusUnbound I look forward to reading your review and trying that whisky...

Tonight I cracked open a bottle of BenRiach in honor of finishing up my grading for this school year! I have some down time coming and my wife can't wait for me to get to that honey-do-list that has been sitting on the back burner since March.

This is a lovely combination of peat and sherry. 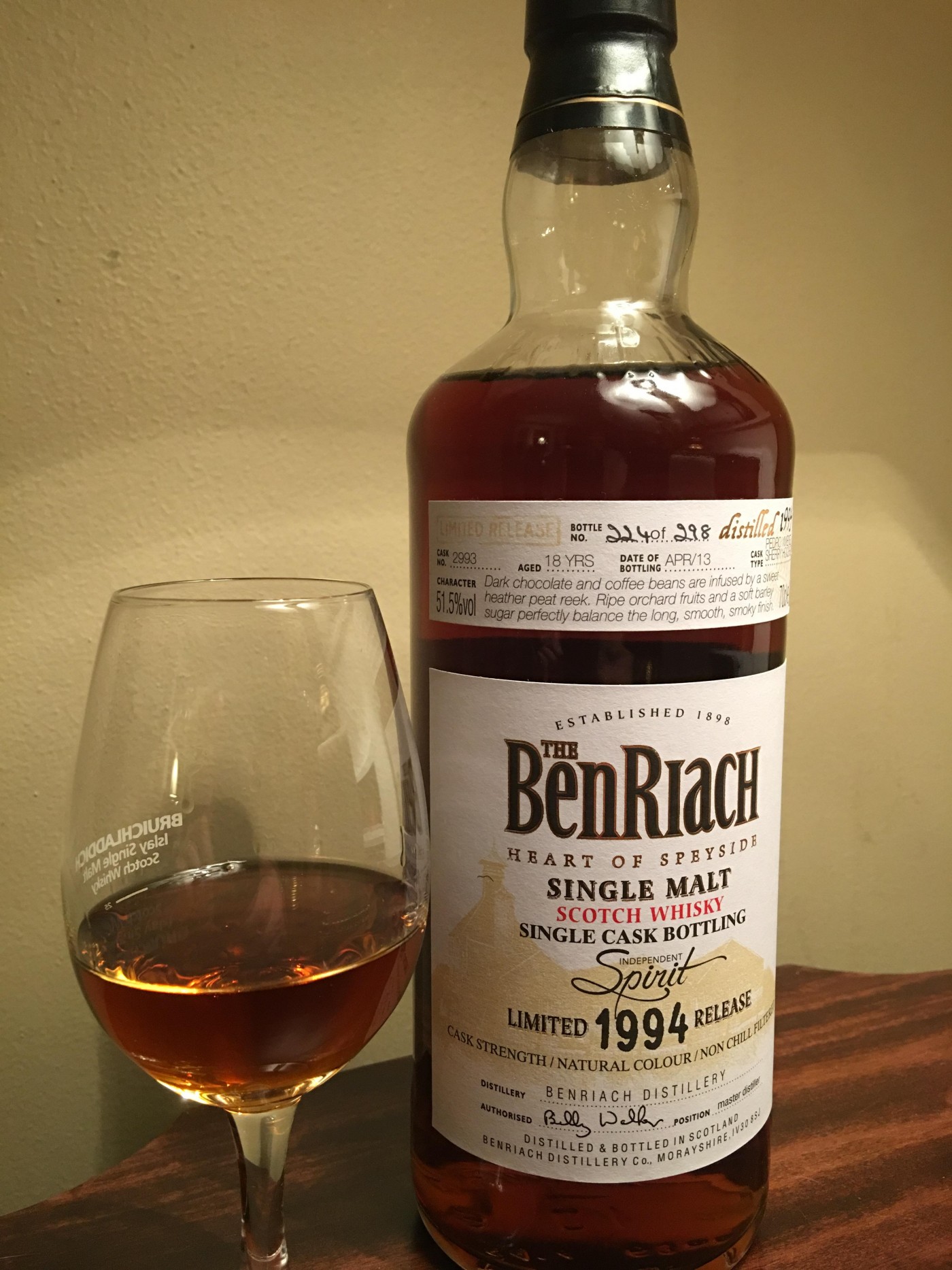 I am not drinking any whisky now and will not drink any in a near future. I will not be active on Connosr anymore as I have to cut on my alcohol consumption for my health. Don't worry, I am fine but I prefer to prevent rather than facing a major problem. I postponed this comment for a long time because I did not want to put an end to this aventure. I had a lot of fun, I met fantastic people: funny, generous and knowledgeable. Sharing is more than half the fun. I hope to come back one day but following you on a daily basis makes it too difficult to not have a pour. Therefore it's a "Farewell".

about one year ago 9Who liked this?

@Robert99, we'll miss you! Best of luck with your goals.

I've slayed many of my "would love to try" dragons these past few years, at least as far as attainable modern stuff goes. But a single-cask peated 1990s Benriach still eludes me!

@Robert99 Good luck to you on the rest of your journey. I have been in a similar position these past few years. I have spine issues and I have had repeated surgeries and injections over the past decade. I had to stop drinking any liquor cold turkey in order to recover. I am just now easing into tasting whisky again. I still have to go lightly, but I am able to enjoy an occasional dram.

I've not been active on here all that long but always enjoyed your contributions and suggestions.

@Robert99, you will be missed. I await your return, that my friend will be an Epic Tasting!

Greetings and apologies from my extended absence. It’s good to see many of you still in here.

Since our trip to Portugal last October I’ve been enamored with port wine. Like most single malts, the more you spend usually gets you more complexity. There are some wonderful ports. If you need something different for the warmer weather try them.

Another birthday coming up and a visit with my father. I’m eyeing these two bottles of Puni, an Italian Single Malt I purchased a few years ago in Venice. Both are batch #1.

I will report back once I try them.

@Robert99 - going to miss you. Wish you the best and hope to see you back here soon! Take care!

@Hewie and @MadSingleMalt thanks! I am delighted with the BenRiach. It is actually better than I expected. I had a small sample of a 1984 peated and PX finished BenRiach that I adored. I have been on the lookout ever since for something similar.

@DaveM and @Wodha nice to see you guys popping back in!

@Wodha port was my initial entry into alcohol back in the 90’s. I quickly found myself deep into Vintage Port. I was looking for something to drink with a cigar. I have never been a fan of pairing beer with cigars. I still have a few bottles of port cellaring for sometime now (mostly from the early 2000’s). Occasionally, I find myself interested in a glass of port with a cigar. But I have really backed off the cigars in the past few years.

What am I drinking tonight? Ardbeg Corryvreckan!! I just picked up the same batch owned by @Nozinan and recently approved by @Victor. That is batch 16/03/2018 opened in the last hour. I am comparing it with another recently opened batch 16/11/2015. My initial impression is that the 2018 is much brighter with soaring high tones (which could easily be all fresh bottle). The 2015 (which was opened only about two weeks ago on April 28th) is much deeper, darker, herbal, tons of deep rich vegetal notes.

Wow that 16/11/2015 is super vegetal with tons of moss, seaweed, fennel, earth, fungus, woody, and of course peat. Very deep, dark, and thick . . . maybe too thick? Too vegetal? Have you ever had a whisky where you can tell it is super complex, but maybe a bit too much? This seems on the line here.

Wow that 16/03/2018 really has some power and depth on the finish. Tons of peat and lovely fennel notes. Right now this is all bright and clean next to the 16/11/2015. But I really like the finish. It get dark and deep in ways that I really enjoy. I will give it a week before I put it into a Blind-Corryvreckan-death-line-up.

Here are the batches I will put it in blind with:

All are good. All are different. Who will win? Give me a week and I’ll tell you.

@Nozinan - I’m still waiting to hear back from my contact in Edinburgh, but I’ve done bottle archive searches on both the American as well as the U.K. Society websites and on whiskybase.com. It does not appear that the Society has released any bottles from the Armstrong era. Most bottles released are from the late 80’s / early 90’s. Now, that doesn’t mean the Society doesn’t have casks that they purchased from that era in the Society warehouse waiting to be bottled, but none have been released that I can find.

Give me Corryvreckan, or give me Lambertus.

I’m finishing up the last of the Big Peat given to me by @Nozinan . I really enjoyed this stuff and would definitely buy a full bottle if it wasn’t stupidly-priced. Review to be posted soon(ish).

Budweiser Jim Beam Copper Lager! Why? Because it is the May Two-Four Weekend!

May 24, 1819 was the birthday of Queen Victoria. In many parts of Canada the Monday before/on 24 May (Queen Victoria's birthday) is a recognized holiday; however, "Two-Four" is a colloquialism used in parts of the former British colony, Canada, to describe a case of beer containing twenty-four bottles/cans of beer. This phrase has become part of the Canadian lexicon. It has been used for such a long time that the current generation of beer drinkers no longer recognizes "two-four" as the birthday of a long-dead queen, but as the informal commencement of summer and a form of tribute to that Canadian staple, the two-four of beer.

I picked up my two-four and I must say Budweiser did a good thing boosting this beer to 6.2% abv. and enhancing the taste with bourbon stave aging. To celebrate the former queen's 200th birthday, and also to welcome the long awaited b-b-q season, I have spent $200 on beef tenderloin, it was $10/lb, how could I resist?! There goes my whisky budget for the month.