Average score from 2 reviews and 28 ratings 86 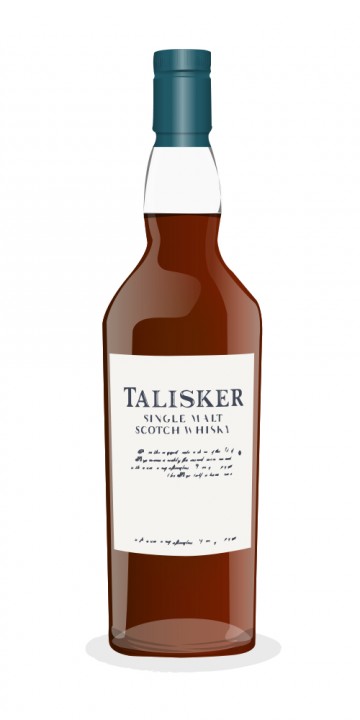 Talisker distillery is the only distillery on the Isle of Skye and was founded in 1830 by Hugh and Kenneth MacAskill, sons of the local doctor. It was rebuilt between 1880 and 1887, and was extended in 1900. In 1925 the distillery was acquired by the Distillers Company Ltd and today is part of Diageo. In 1972 the stills were converted to steam heating and the maltings floor was demolished. Talisker distillery is famous for its stills’ swan neck lye pipes: A loop in the pipes takes the vapour from the stills to the worm tubs, so that some of the alcohol condenses before it even reaches the cooler; it then runs back into the stills and is distilled again. The Distiller’s Edition is part of Talisker’s core range; this version was distilled in 1993, finished in Amoroso sherry casks and bottled in 2006.

The nose starts with intense flavours of rubber (in a good way), followed by prunes, oranges and some caramel. Overall this is a rather fruity nose, interspersed with mild pepper.

The palate is full-bodied, salty and peppery. The smoke that was hardly present on the nose is quite prominent now. There are earthy notes, balanced by a fruity sweetness (mainly oranges and lemons).

The finish is of medium length, peppery and spicy. It is quite warming and ends on dried fruits and herbs.

I enjoyed this particular member of the Talisker core range although I find both the 10yo and the 18yo to have a more unique character than the Distiller’s Edition. Still, this is a very well crafted single malt that I can imagine sipping on many different occasions.

Nose: Immediately a strong waft of wet grass, perhaps more like when you leave a wet and muddy t-shirt in a bag for too long and it starts to mould. Definitely a hint of stale water in any case, as we work down towards the fruit, of which there is plenty, a feast of peaches in fact, with a few citrus and orange notes thrown in between. As we work down towards the sweeter and more malted notes, we can savour sweet shortbread and carameled barley, before ending on a some subtle smoke, liquorice and aniseed. A very compelling nose, that seems to cover nearly every flavour profile that one could expect from the nose, while also strongly representing it's sherried character. In fact, when watered down slightly, from a distance one could be forgiven for thinking this was in fact a sherry or a fortified white wine. Very much a nose for all seasons.

Taste: Full bodied and oily, with a strong creamy character, revealing much of the shortbread from the nose, while also introducing a rich fruit crumble, perhaps of the plum variety. There are some more classically 'Talisker' notes to be found here, most notably smoke, pepper and seaweed, but there's nonetheless some more global notes of ginger, creme brulee and rich barley. Has the feel of a Talisker ex-pat who's national characteristics have softened after so many year's abroad. Not necessarily for the worse either.

Finish: Quite big and explosive, however it all happens quite quickly. The apple is very much at the epicentre, while iodine, salt, pepper and coal are flung out in all directions. In the immediate aftermath we are left with some floating cereal and cauliflower, slowly coming down to settle on the soft caramel turf below.

Balance: I never quite know what a 'Distiller's Edition' is supposed to mean. It's not like a Director's a cut where the director is allowed to show the edit that he wanted to release had he not been under the iron-fisted rule of the studio. At the Distillery the the Master Distiller is the director and producer all wrapped into one, therefore all distillery bottlings should be seen as 'Distiller's Editions'. Perhaps it's in fact the reverse of the director's cut, where the studio (in this case Diageo), comes in and releases the edition that they'd want to show to the world, rather than what the more radical director intended to show. If so then they have produced a very worthy ambassador of the Talisker nation, one that can go out and charm the world, while expressing the Talisker policies with a mild and sensitive approach, and taking into consideration the policies of the varying other global distilleries. A diplomat, a man for all seasons, but very much from Talisker.

Great review as always @OJK. I've just realized that my favorite malt is the Talisker 10, that's why I decided to buy in the near future the gift set containing the three 0,2L bottles of the 10, the 18 and the DE. I'll then come back to you and share my opinion about this particular Talisker.

Thank you very much @drinix! I look forward to hearing your thoughts on the DE - I think you'll find it complements the range quite nicely, although of course the 10 and the 18 stand out as more uniquely characterful whiskies.