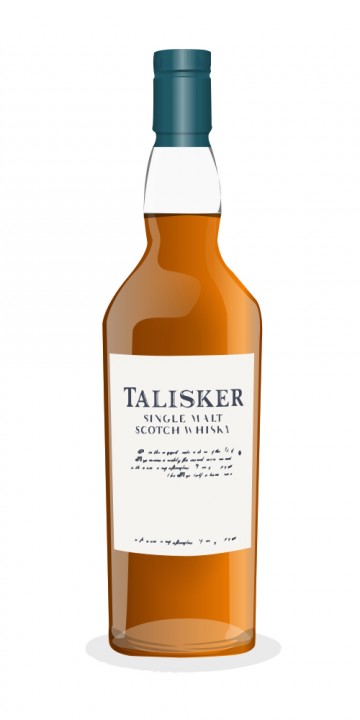 The Talisker Distillers Edition has been released on an almost yearly basis since 1997. It is always double matured, which basically means that it was recasked for a finish after the regular maturation. In this case, in an Amoroso sherry cask. The dram in front of me, clamouring to be tasted, is a distillate from 1992, bottled in 2005.

The typical character of Talisker is clearly recognizable on the nose, which is a good thing. The sherry puts a soft mattress of chocolate, roasted almonds, polished leather and walnuts underneath and covers it with a soft blanket of orange marmalade, mixed peppers and dark honey.

It is very creamy and fiery on the palate. Quite a bit of peat and a pinch of salt go before cloves and a whiff of cinnamon. Then it turns sweet again on bittersweet orangettes, honey and a mild maple syrup. Becomes sweeter as we go along. The pepper keeps counter footing as well. Boy, this is a sturdy palate.

The long finish is warming, peppery and sweet.

Not as complex as the 18 Year Old, but still a wonderful whisky. Around 60 EUR.

Really nicely done, as this is a really nice departure from the standard Talisker releases. They switch the whisky over to Oloroso Sherry for finishing. Classic peat and cracked pepper aromas that one expects from Talisker, with that added sherry factor. This 16 year really shines in the finish, once your primary, classic Talisker flavors fade into incredibly complex nutty notes, with citrus and orange peel notes. Will certainly be on the lookout for newer releases of this Distiller's Edition!

I like Peat and sherry together, when done well. Talisker DE accomplishes this.

I don't care for overly sherried scotch with the exception of Aberlour A'bunadh, which is an animal.

Taste: sweet fruit, pepper and smoke combine together to form a very pleasant palate. There is substantial salt here as well. The delivery is different than Talisker 10 yo in that salt and pepper are toned down compared to the 10 yo and the fruit is stronger. The sherry wine finish works well here

Finish: There is a long finish, with all of the flavours persisting for a substantial period

Balance: There is more complexity in this whisky than with the Talisker 10 yo, due to the greater sherry/fruit flavours at the expense of the salt/pepper/honey/smoke tetrad of the Talisker 10. This is a very pleasant and enjoyable whisky

We had this with salmon the other night and it was just marvelous. I like it better than the 18 year old. For me, it had just the right balance of fruit and smoke. We all felt it was easy to like this one.

We cooked the salmon on a cedar plank using a charcoal grill. The fish was prepared with olive oil and blackened seasoning spice and the cooked on the plank giving it a light smoke flavor. The Talisker 1992 DE just was great with the salmon. I had never had this scotch before and we had purchased a three bottle gift pack to try these Talisker bottlings. A real hit.