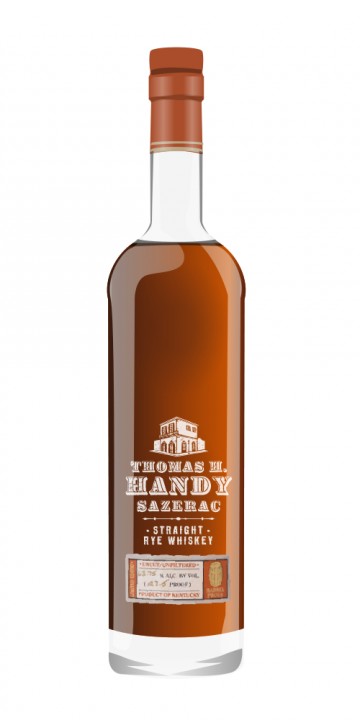 I’m sure by now you know that I’ve very little experience with rye, especially that which comes from the US. So in 2014 when I entered my first BTAC lottery, what did I end up with? Yup, Thomas Handy. I wasn’t even going to shell out $130 but @Victor convinced me to pick it up knowing that someone would want it if I didn’t. Then @Talexander come up with a great idea…host a tasting for a bunch of die-hard fans with the centrepiece being the three CS expressions.

In order to prepare for this I tried AP, AP25 and AP30, and even bought a bottle of the not half bad Canadian Club 100% rye.

On Jan. 31 2015 we met at his house, the Weller generously provided by @paddockjudge and his Stagg at the ready. That was one epic tasting. After tasting and samples poured off, when I got home I decanted the remainder into a 240 cc bottle (it fit perfectly), and since that time I have opened it once for someone to try and it has remained closed and gassed since that time. In fact, I had a hard time unscrewing the cap!

Neat – From the pour, high pitched fruit hits first, with some vanilla and caramel in the background. With time some light syrup and a hint of pickle juice. The alcohol is a little sharp. Rome red berries and dust. I wouldn’t say complex, but certainly not unidimentional. 22/25

With water – I get no appreciable difference in the nose.

With water – Richer. Creamier. The flavours are less distinct but come together to form a wonderful sensation in the mouth. (22/25)

Finish: Short. The mouth is dry. Dill. There is a hint of what was there before. 21/25 Water makes little difference, the dill is less prominent but still there.

Balance: The nose and the taste complement each other will. I think this is a well-balanced dram. 22/25

As I’ve said, rye isn’t my thing. I can’t say how this compares to other ryes out there because I really haven’t tried enough of them. I’ll have to see how I feel when I try the sample of Boss Hog that I have waiting for me.

For a guy who doesn't drink a lot of rye, I believe you are starting to get it. Thanks for sharing!

After reviewing two unaged grain spirits (shudder), I had to step up my game a little. Maybe I stepped it up a bit too much...

A couple of months ago, our provincial liquor monopoly / retailer / dictator / gouger brought in some of the 2014 Buffalo Trace Antique Collection bottlings. Knowing of course that demand would far outstrip supply, they developed a lottery system whereby you win the chance to purchase the bottles (which I've never seen them do before). Luckily, I won one bottle, and two friends won two other bottles, which means....sample swap!!

The 2014 Thomas H. Handy Sazerac Rye was distilled in the spring of 2008, matured in 47 barrels for six years and three months, then bottled in the fall of 2014.

The colour is a deep reddish copper. On the nose we have those beautiful notes of rye spice, pepper, herbs, wet slate and cinnamon / cloves. Hints of vanilla and coconut. Becomes richer and fruitier with water. Very nice but not as robust as in previous bottlings.

Very mouth-drying on the palate, with more vanilla, Christmas spices (more nutmeg on the palate than on the nose) and stone fruits. Very big and robust but a little overpowering. Water smooths things out but retains the punch - but it's still a bit too much punch.

The finish is hot and dry, with herbaceous notes and overwhelming spice. This is a powerful rye but I think it needs a bit more subtlety and complexity, which I found was there in prior years. However, you still can't go wrong with the Handy. Delicious as always.

An 87 pt Thomas Handy Rye? YIKES! John Hansell of Whisky Advocate said that the 2014 Thomas H Handy was below its usual standards. Apparently you find it so also. Too bad. Hopefully future years will be more back to the prior norm. Thanks for your review.

This was my first non-Alberta Premium distilled rye (well, the details of that night are fuzzy (- there may have been another non-BTAC rye first). I have to say I was quite surprised, and very impressed, but I have no other example against which to gauge this.

I still haven't recovered completely from that evening, but when I do, I may review it myself...