Average score from 2 reviews and 3 ratings 77 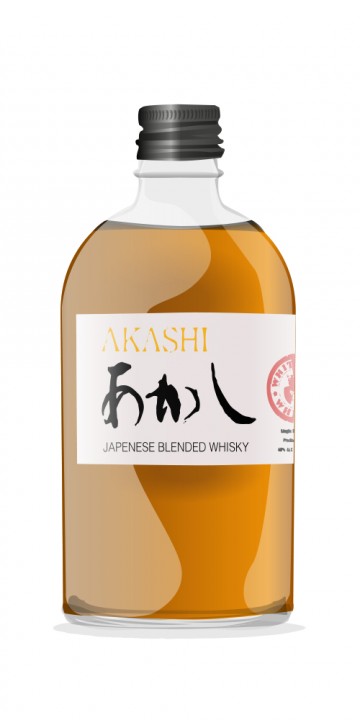 This White Oak, without age statement, from the Eigashima or White Oak distillery in Japan, is a blend, not a single malt. White Oak is only active for two months per year, so their output is very limited. This blend, in bottles of 50cl, are available for around 30 EUR. It has matured some 5 to 6 years.

The nose is light and very accessible. Reminds a of plum liqueur. Some krieks as well. And hay in the background. Fairly simply, but pleasant.

The texture is light, honeysweet on plums and blood oranges with a lot of sugars, a nice peppery spiciness and a hint of smoke. This is becoming interesting.

The finish, however, is rather light and very short.

This is a pleasant enough Japanese blend, but nothing more. Thanks for the sample, Thierry.

Is this the one you see labelled as Akashi?

Yes, it is the same, but different packaging, depending on the date of bottling and market.

This review is for the domestic Japanese bottling of the blend, which is something that has proven to be rather controversial. But more on that soon.

The distillery was founded by in 1888 for the production of sake and shochu. A license to manufacture whisky in was obtained 1919 – making it the oldest licensed whisky distillery in Japan. White Oak Distillery was established in 1984 when new facilities where sourced. The whisky stills are only in operation for one month every year, making for some small output, which is mostly used in blends. The distillery is located west of Kobe and near the Seto Inland sea; a narrow passage that runs between Honshu and Shikoku. Having viewed the sea from both sides of the straight I was curious to try this whisky made in the area.

The malt component has been aged in for 5 years in ex-Bourbon and finished in ex-Sherry casks and makes up for 40% of the blend. Now onto the controversy. What’s in the rest of the blend? For the export market (North America, Europe, Australia, etc) it is made up from grain whisky imported into Japan for marriage and bottling. Why do this? In short, the Japanese business model does not see competitors selling stock to each other. So unless you are one of the giants Kirin, Nikka or Suntory, then you have to source your grain component from outside of Japan. Keep in mind I am drinking the local expression, so my does not contain imported grain whisky. Instead it contains 60% molasses spirit, some, which has been stored in barrels.

My mind starts to run a millions miles an hour, have I just picked up a bottle of rum, that's passed off as whisky like they do in Malaysia, Indonesia, India, Thailand et al? At least this has malt whisky in it. Akashi have always been transparent about what is inside the bottle. If you can read what is on the label it is all clearly listed. And let’s be realistic it satisfies domestic law for what can be labelled as whisky and exported bottlings of White Oak meet European standards of whisky containing malt and grain whisky aged in oak barrels. I’m calling fair game.

Not complicated and it is rather unexciting, the finish brings down the dram and the molasses dominates. I’m not writing White Oak off though. I am excited to try the export version of this whisky and especially some of the single malt expression Akashi. I may even pop into the distillery next time I am in Kobe.

Thanks, @Frost. This is why we read reviews--to get some idea of what is actually out there, that we may one day run into. It is a public service to cast light into the darkness of our inexperience.

This whisky is also 'scary', but at least you have some idea what molasses spirit might taste like. It should be interesting for you to try the full export version whisky-on-whisky blend one day soon...and to see if you can find out which imported "grain" whiskies they use in it.

@Victor I was certainly surprised when I dug deeper into the domestic expression. I'm too curious to try the whisky-on-whisky expression. It sometimes surfaces here, and goes fast.

I'll see if I can find out the source of the imported contents.