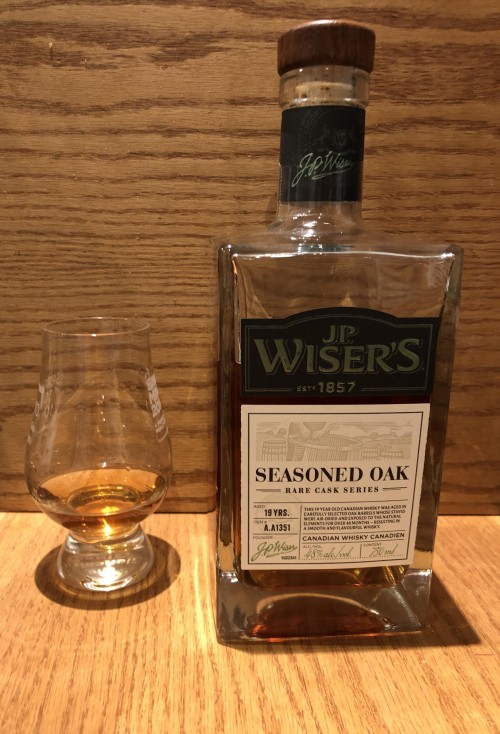 At the end of the last decade I finally started taking more of an interest in Canadian whisky. I’d previously lacked enthusiasm for it. Many expressions, even the “good ones”, were bottled at low ABV. When Jim Murray crowned Northern Harvest Rye the World’s best whisky, it did not help. The few Canadians I had enjoyed until 2017 included Alberta Premium 25 and 30 YO (though I did find them a little weak), and Danfield’s 21. I still regret letting those 4 bottles evaporate in a small town in Alberta… Sorry @paddockjusdge.

Then Dr. Don introduced the Northern Border Collection in 2017 (which I previewed in the spring at Spirit of Toronto that year). From that point on my interest grew and I have developed an appreciation for Canadian whiskies, particularly the ryes and high proof (or both) versions. At SOT in 2018 we got to taste this one - it was released for Father’s Day. I was able to get a couple of bottles (with trepidation… $100 a bottle in those days was considered high for a Canadian…).

I don’t remember a lot of details and the info on the bottle is limited, but with the help of some of the prior reviews (which I looked at AFTER making my tasting notes), It seems that this release contains mostly aged corn spirit with a little rye thrown in. Dr. Livermore used re-fill casks and then, after 18 years, the spirit was finished for a year in casks made from wood that was allowed to dry (or “season”) outdoors for at least 4 years.

This bottle was originally opened in June 2018. Before taking this one out of hibernation 2 days ago, the last time I had opened it was Dec. 2019, when I shared it with @paddockjudge. It is still 2/3 full and likely gassed after each use.

This expression is reviewed in my usual manner, using both a standard and Canadian Glencairn, allowing it to settle after which I take my nosing and tasting notes, followed by the addition of a few drops of water, waiting, then nosing and tasting.

In the standard glencairn, very spicy. Lots of caramel and vanilla and butterscotch. A little green apple. The empty glass has a little dill. I’m sure others would tease out more but it’s all I really get. But a rich, vibrant nose. In the Canadian glencairn the alcohol becomes a bit more pronounced and overshadows the rest. I prefer the nose in the standard glass.

Water seems to dampen the nose.

Sweet on arrival, spicy with lots of caramel and vanilla. Some pepper. Very rich. Super oaky, lots of tannins. In the Canadian glass it somehow becomes “smoother”, and the flavours are less distinctive.

Water seems to wash out the palate a bit.

Astringent, oaky, with pepper at the end. A little less oaky in the Canadian glass.

Water shortens the finish and makes it less astringent.

The balance between nose and palate is good. I like the oakiness in it.

I like this whisky. I have to admit I was less impressed with it initially, but I think that over almost 4 years my palate has matured. It is very “Canadian”, in that its underlying flavour DNA reminds me of many standard expressions, but with a bit more richness and flavour.

I prefer this one neat. Water seems to simply dilute it.

If you don’t like oak or tannins, this one is not for you. But if you like a spicy, oaky whisky, you will want to try this one. Sadly, it is long gone from retail, but I know a guy who can get you a dram…

END_OF_DOCUMENT_TOKEN_TO_BE_REPLACED

@Nozinan thank you for your nice review.

Tastes are individual, of course. Some like the flavours of oak, others do not much care for them. I am an oak guy from day one. Oak was my favourite even among the Bach Flower Essences years even before I started to think seriously about whiskis and how the flavours of oak wood influence them.

This Wiser's Seasoned Oak is indeed an oak spice trip. I love that sort of trip, especially when it is done well as it is here. Oak tannins can be harsh and difficult to take if they are not successfully mellowed out around the edges. I recently commented on how some bottom grade Heaven Hill bourbon had the initial characteristic of caustic sledgehammer oak tannins, which I attributed to be the reason why it was dumped and bottled at 3 years of aging. Any more aging would just have made it worse. That same Heaven Hill distillery keeps some of its heavily tannic barrels going all the way for its batches of 12 yo Barrel Proof. Those succeed at what I would describe as the upper limit of acceptable oak tannin aggression.

In general I do not care for a lot of tannins, which is one of the reasons why I am generally indifferent to red wine. But sometimes a whiski works well with or despite a lot of oak tannins. The beauty of a whisky like Wiser's Seasoned Oak is that nuances of oak flavour are teased out of the wood during the seasoning period which are not observable in whiskis subject to oak seasoned for much shorter periods.

You might ask, if I don't care for high tannin content, why would I like George T. Stagg which is matured for 15 years in new oak? I am convinced that barrel selection for George T. Stagg is made among those barrels with the lowest tannin levels. With Stagg you overwhelmingly get a wood trip, but, nonetheless, not a lot of tannin. There are other, more delicious flavour elements in oak than tannic acid. Stagg highlights those other elements.

@Nozinan, a nice review for a nice whisky. Definitely a unique twist to an old and proven method of producing a nice 18 YO whisky.

@Victor, I dusted off a few cases in the bunker and was able to pull out one of these for our next meeting. It was purchased in July of 2018, most likely as an afterthought… as are many unique bottlings. 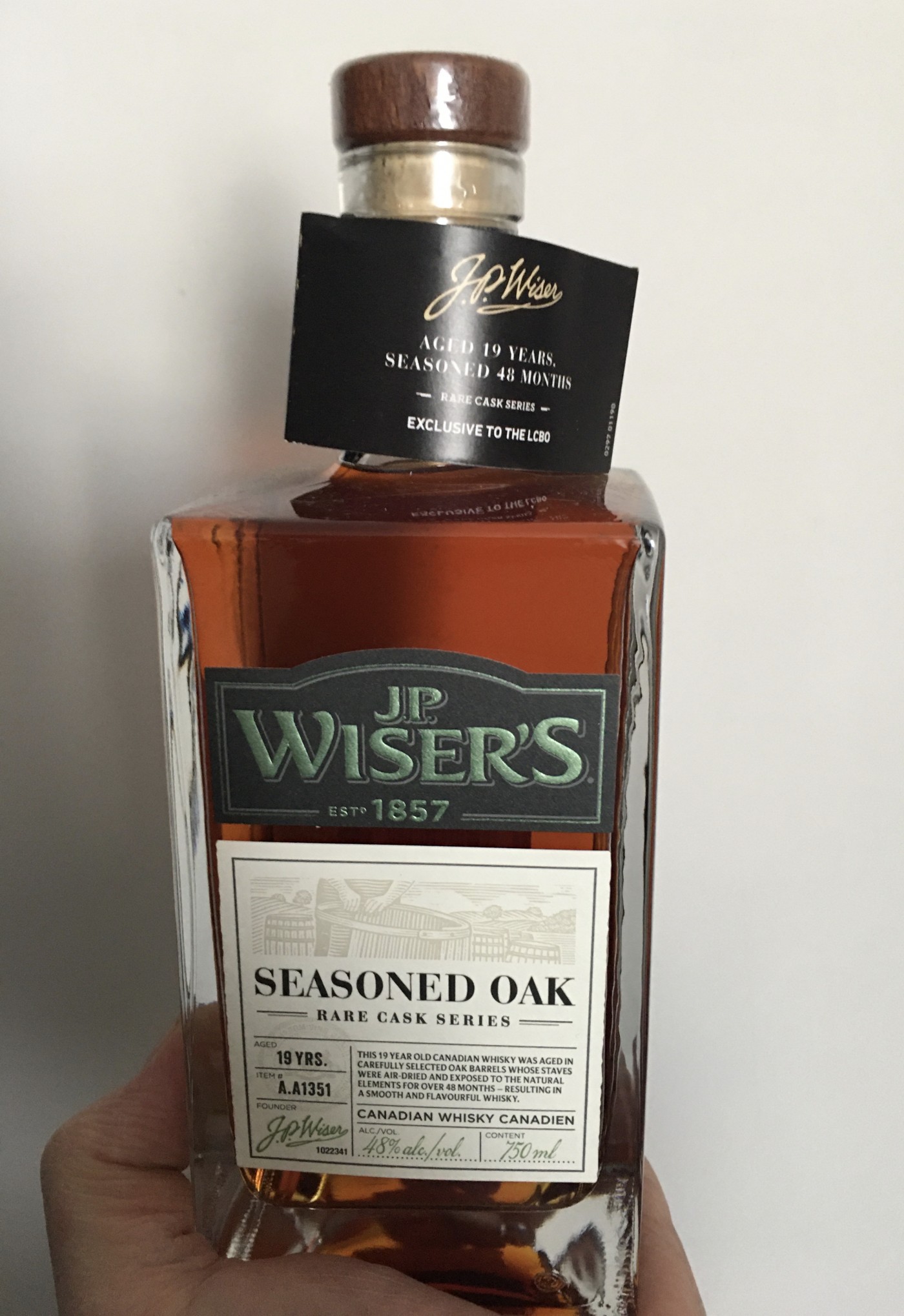 @paddockjudge No need to crack open a bottle. There is still plenty left in my bottle and I expect it to last another decade at this rate. But I think I may want to have a dram or two in the next few weeks before it goes back into the back of the cabinet.

@Nozinan, a very generous offer on your part, thank you, but I'm not opening this bottle; however, I am looking forward to having a wee pour from your open bottle.