Average score from 3 reviews and 14 ratings 85 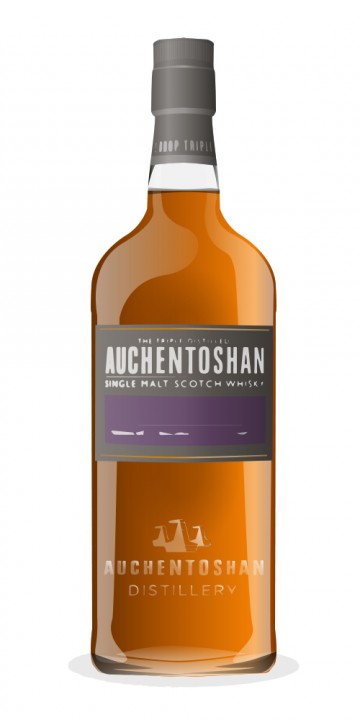 By now even the casual whisky drinker will know of Auchentoshan's triple distillation. It's core expressions are usually affordable, in contrast to some brands.

What is certain is that in its OB format 'Toshan can be polarizing, it's a supple spirit that is often presented at anemic proofs and can be botoxed to excess by oak manipulation. This will be the first time I have an older version.

It's a mix of bourbon & sherry casks no specific vatting info.

Nose: Pastry dough, or let's make that cinnamon buns, apple, some guava. I get a good bit of the grain coming through, powdered sugar, a little latex. It's pretty delicate, with time develops some fruitiness, jujubes. A smidge of pineapple.

Palate: Milk chocolate, cashews, candlewax, raisins, I get a bit of sulfur, powdered ginger, lemon rind, there is a surprising amount if grip for 43%.

Finish: light, grassy barley, a little bit if fruits but it suffers the most here, it loosens it's hold fast, leaving little impression after you've swallowed.

There are some nice aspects to this whisky, I like the attack on the palate, where the grain notes are holding their own against the sherry. Sadly the texture is so limp that the finish fails on the promise. One of the better versions I've had but still good, not great.

I agree with all of you. Valinch was very good a few years ago (I need to revisit this one) but when I read "delicate" combined with " a bit of sulphur", it's a big no for me. The more delicate is a whisky the more "clean" it needs to be . I will also admit that pineapple flavor is a warning for me. If it is on the sweet and warm side it evokes tropical fruits but if it is on the acidic side, it reminds me of strawberries and I don't like that flavor in whisky.

Thanks @cricklewood for a very honest review.

I feel Auchentoshan suffers the same fate as fellow stablemate Bowmore who's OB's often feel drained of vigor (there are exceptions) but when handled by IB's they tend to be delivered with more power and singularity.

I have tasted the 21 Year Old on several occasions, including during my first visit to the distillery. While browsing my tasting notes, I was surprised to see that I had not yet written any for this great Scotch. Oh, well, any excuse will do to have another sip of this one.

On the nose, this Toshan offers a fresh mix of green apples, vanilla, gooseberries, apricots, tobacco leaves, barley and sugared almonds. Some dried grasses and honey. No, make that maple syrup. Mint! A light hint of oak. This is good. Very good, in fact.

On the palate, it is all After Eight (you know, the mint-filled chocolates), accompanied by creamy honey, nuts and sugared orange peel. Again a nice supporting role for the oak. I daresay this is complex.

A great Auchentoshan, that feels quite mature. This would go very well with a stew of boar, I kid you not. Wonderful winterdram!

Great review, Mark! It's quite helpful.

This is the old Auchentoshan bottling, which I received in fall for my Birthday. It is the first Toshan that I am tasting, so I cannot compare it with the younger expressions

Body: the legs are thin and very long to form. You almost can see the triple distillation

Nose: First it was grassy notes with hints of toffee, but after the malt breathed for a few minutes, it was all about apples (McIntosh brand or similar to be more precise). There is maple syrup too and the grassy notes are still there but the apple is very in the front.

Mouth: Very pleasant with all flavors that the nose got. You can feel the triple distillation as the alcohol is very volatile and the liquid is creamier

Final: It is a long final lingering on grassy notes

A very nice dram. Does it worth the 150$ it cost? Maybe not, but I will enjoy each and every dram of this bottle now that I have it in my cabinet as a gift.

Great review. I love when people review older whiskies because there aren't that many reviews on them in general and it really helps when researching for the next big purchase.