Average score from 3 reviews and 3 ratings 86 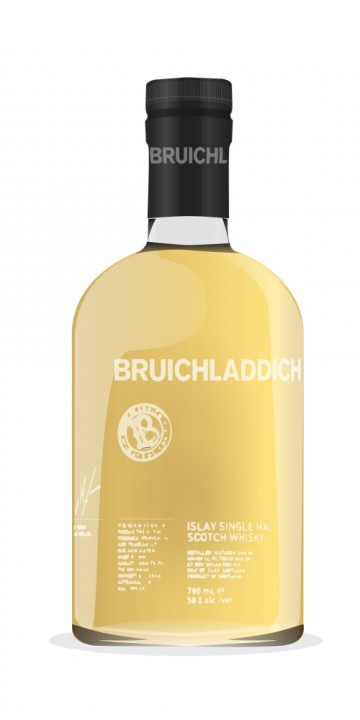 I totally agree, Islay Barley 2006 is a very vibrant and speedy version of the great Laddie Ten. Isn't as great but almost lives up to Laddie Ten's greatness.

This is so fresh that you're almost witnessing the movie Speed for the very first time. Innovative and fresh, from fresh ingredients. Just like Speed was when it first came out.

Finish: Lasting peppers. Crispy fruity but not too crispy.

Balance: As fresh as you can get with whisky? Good, vibrant stuff.

And here's my Laddie Ten review:

Bruichladdich proves that the concept of 'terroir' is not exclusive to the world of wine. Islay Barley 2006 is the second release in the former Uber Provenance range. Islay Barley is the product from one farmer (John Logan of Dunlossit Farm), one barley variety (Chalice) and one field (Jubilee Field).

“We believe terroir matters”? One should start thinking it. They even provide you with a geographical description of the barley field (the eastern side of the island, at an elevation of 100 metres ).

In 2013 the Bruichladdich adapted its core strategy and goes full throttle on the concept of local barley. We should be seeing more “Islay Barley” and "Scottish Barley” in stores by now.

Nose: The nose is a mixture of yellow flowers and barley. A heather field with plenty of buttercup flowers. Also some vanilla sugar pudding and fresh green apples. Adding water unleashes a briny sea-breeze through a cherry orchard and at the same time brings up some sweeter notes. I'm thinking of some honey and gingerbread.

Finish: The finish is crisp and dry. Oak flavours and a hint of vanilla extend the pleasure of this piece of craftsmanship.

Conclusion: I'm not exactly the alternative type that frequents Oxfam stores, but Bruichladdich has convinced me with their organic approach. The 2006 Islay Barley has been replaced by a 2007 expression. The barley comes from Rockside Farm and is cultivated by Mark French.... Indeed, the terroir story again.

This Islay Barley is young but complex. If we can believe Master Distiller Jim McEwan, this whisky has truly captured the island's spirit. As long as I haven't been there, I'm taking it for granted.

Can't speak for the Scottish Barley. Hope to score a sample or a 20cl bottle soon. And they made an excellent decision by reducing their whiskies to 50% in stead of the common 40 or 43%. I can only hope more distillers follow their example.

I found the Scottish Barley to be smoother (in a good way). Tasted them side by side a few days ago.

I'd recently attended a whisky tasting held in the city center of Perth that comprised the launching of a new Australian distillery: New World Whisky's Starward Single Malt, 5 different Bruichladdich's and 5 different whiskies from Buffalo Trace.

I've had a good portion of the Buffalo Trace series and they're always good for a giggle, but I'd mainly came for the Starward and to try the Bruichladdich's which I'd only had very limited experiences with.

Up to this time I'd only had the Bruichladdich Classic, not a bad little whisky and Bruichladdich's Octomore Orpheus 2.2, absolutely brilliant.

The first whisky we started with was the Starward and then moved to the Bruichladdich Classic. Next on the menu was Bruichladdich's Islay Barley.

I'd seen the very many different Bruichladdich whiskies for sale on different whisky sites before, but knew very little about their whiskies other then it was an Islay distillery that was small production and doing some interesting different whisky experiments.

The speaker talks about Bruichladdich and how when you go back decades ago all the barley on Islay was grown there and how these days the majority of distilleries will import their barley, and how Bruichladdich is trying to change the way things are done, by now having farms on Islay grow barley for them and how this release's is from just one farm on Islay.

This release's barley comes from the Headland of the Gallows on Dunlossit Farm.

It's a pale whisky, light in color and it's also an unpeated whisky, so any flavors or aromas of peat will come from the water around the distillery.

It has a soft nose, with faint peat, citrus, honey, vanilla, caramel, barley, floral, but not overpoweringly so and lots of fruit, mainly cherries, some oranges and lemon.

It's an interesting little nose and not at all what I'd expect out of an Islay whisky.

Nice little mouthfeel, the higher strength helps that out, too many whiskies that sit below 50% or heck even at 50% have too thin a mouthfeel for my personal liking.

Again there is some faint peat, but it's in the background behind citrus, pears, oak, vanilla, honey, barley and chocolate.

Delicious, but again for me, not having had many unpeated Islay whiskies it's a bit of a surprise.

There's a long lingering finish with the citrus hanging on and on.

An enjoyable little whisky and a whisky that makes me wish that I could try it up against another Bruichladdich, same age, same cask, but with different barley, just to see how much the different types of barley influence the whisky.

I haven't seen this whisky in Australia yet sadly, but I'd expect to pay about $80 to $90 AUS which isn't a bad price to pay for a higher strength Islay whisky. If you happen to see it in a bar and are looking for an interesting variation on the Islay whiskies I'd be happy to give it a go and over here in Perth I'd expect to pay $15 or so a dram which seems fairly reasonable.