Average score from 5 reviews and 7 ratings 83 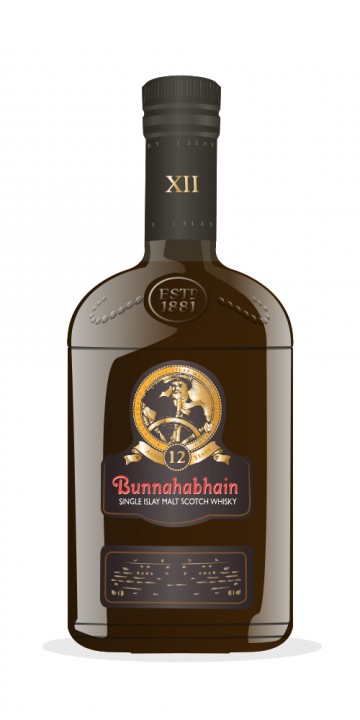 Cruach-Mhòna is Gaelic for ‘peatstack’, so I suppose this is going to be a heavily peated Bunna. It comes in 1 liter bottles for travel retail. I tried it for the first time in 2011, but this is a bottling from 2015, the third batch.

The nose is peaty indeed, but not overly so. Surprisingly sweet though. Dark and sweet, in fact. It is obvious that some sherry casks were used. Candied fruit, walnuts, roast beef and… errr… chicken broth. Some maritime elements, but not overly so either. Fish nor flesh, to be honest.

The body is rather soft, but with a lot more peat now, but also a lot more sweetness. Ship’s rope, sweet barley sugars, burnt wood, liquorice (and a lot of it!) and mildly herbal. This is more like it. Midplate a salty edge kicks in. The smoke becomes bigger too.

The finish is medium long and sweet, while the smoke gently fades. Somewhat drying effect.

Quite a nice peaty Bunna, with a sweet twist.

Bunnahabhain is a gem of a distillery. After enjoying their core range for several years, I thought I had them pegged. Then I tried an IB, and my understanding of their house style went out the window. Likewise with the Cruach-Mhona. I've got the 6th batch of the Cruach here with me and I'm thoroughly enjoying it. But it isn’t the Bunna we know, and that’s a good thing. 50%? Heavily peated? Let’s go.

Thoughts: Objectively this is no masterpiece, but it is loads of fun. Strongly peated with a good abv, a bright, clean character, a nice barley influence, and a spicy kick. There’s a lot to enjoy here. Yes, it’s a young NAS whisky, but it works. The only thing worth comparing it to would be the heavily peated Bunna IB’s, of which there are several. Different from the current OB lineup. Very vibrant stuff. This is an excellent departure from the core range.

Oh, and give it some time to open up. Time is your friend here.

Cool. Good to hear. Thanks, @hunggar.

Cruach-Mhòna (speak "Croo-ach Vhona") is gaelic for peat stack. Normally Bunnahabhain stands for unpeated or low-peated whisky which is kind of unique for Islay. This one is special peated release for the travel retail and comes in the 1 litre-bottle. It is unchillfiltered and uncoloured.

The colour is bright golden.

On the nose you first get sweet peatsmoke and iodine. At first it is very fresh with hay and lots of bright fruits. There are also earthy tones. At least this was my first impression. Later after I sipped it, the nose turns darker. I get nearly a spicy rum-like nose with licorice and a smallish alcoholic bite.

The palate delivers peat. A good portion Islay-peat. It's strong on the attack and offers some citrus. There are dusty, muddy, earthy tones and a bit sweetness. It has a light-medium body. There are woody undertones and a slight metallic aftertaste. I guess this one is quite young.

The finish offers peat, wild berries and nutty, a bit briny flavours. It's quite long.

Overall this is an enjoyable whisky. It is quite unusual for the distillery and for the assumed young age this is a complex dram.

Very very light in colour. Fresh seaside, iodine and toast aromas. Quite sweet and salty flavour. Simple, and a little awkward for a style proclaiming "extra-peaty".

The otherwise unpeated Islay distillery Bunnahabhain did some peated runs in 1997, and occasionally they make it into a limited release like Bunnahabhain Toiteach or Bunnahabhain Moine. Now there’s a peated expression for duty free shops (as often also available in a few regular stores). Cruach Mhóna is the name for a pile of drying peat bricks.

Nose: starts savoury with coastal hints of dried algae. Toasted bread. Then some herbs and something that vaguely reminds me of Maggi or – strangely – Worcestershire sauce. Smoke with sweet liquorice. Faint eucalyptus. Less peaty than previous peated Bunna, or so it seems. A few fruity notes in the background that grow stronger over time.

Not a bad dram, but it suffers from a comparison with its Islay neighbours who offer similar (yet more mature) peated whisky for less money.