Average score from 6 reviews and 40 ratings 83 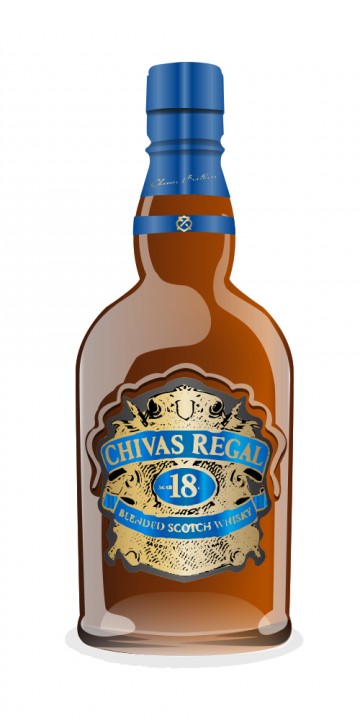 This tasting took place in October 26, 2015, at a bar called El Imparcial in Madrid, Spain, EU.

A clean and glittering amberish shade of pale golden pour. Aroma is raw cereal, smoke, bonfire and a hint of mandarin.

Velvety, firm yet not aggressive mouthfeel leading to a smoky, medium-lasting finish. Not bad at all.

@huineman, your reviews always leave the very pleasant impression that you're living the good life there in Madrid. Cheers.

Thank you! I try my best.

Chivas Regal is one of the world’s bestselling blends. Their range has a classic 12 years old that can easily be found in the supermarket, but they also have an 18 year old and even a 25 year old. In my glass sits the 18 years old, composed of more than 20 whisky’s, both malt and grain. Did you know, by the way, that Chivas actually means ‘narrow place’ in Gaelic? Something for your next whisky quiz? The signature malt in this blend is Strathisla.

The nose is fruity and sweet on apricots, vanilla and pears. It has some freshly baked bread as well. Wait… no… it is a donut with pink icing!

The viscosity leaves a lot to be desired. This needs a lot more body. Having said that, it has a peppery bite before the fruit shines through. Think oranges, honey and… there – the donut returns. Reminds me a bit of orange lemonade, actually. The second sip becomes extremely sweet. All the way in the back is a single grain of salt.

In the finish, which is rather soft, I seem to get a hint of peat. But it is gone before I can think about it more.

I am certain this would go well with a dessert, but as a whisky I find it lacking. Too sweet and simply not interesting. I would rather spend my 60 EUR on something else.

You can definitely get something better for 60 euro. I had it the other day and I liked the sweetness of it but the finish was too short. It's a pleasant drink but not worth its money.

Chivas Regal traces its name back to the House of Chivas, a large mansion that was built at Shivas in Aberdeenshire in 1640; the name is derived from the Gaelic ‘seamhas’, meaning ‘narrow place’. In 1801 Chivas Brothers opened a grocery store in Aberdeen. The store sold luxury foodstuffs such as coffee, exotic spices, French brandies and Caribbean rums to a wealthy clientele, and in 1843 Chivas Brothers were granted a Royal Warrant to supply goods to Queen Victoria. During the 1850s James Chivas started to blend whiskies to create a smooth whisky as it was requested by his customers. As a result he launched the company’s first blended Scotch whisky, Royal Glen Dee, followed in the 1860s by a second blended Scotch whisky, Royal Strathythan. In 1909, Chivas Brothers decided to create its most aged blended Scotch whisky to be exported to the US where the booming economy after the turn of the century was fueling demand for luxury goods; this whisky was named Chivas Regal. In 1950, Chivas Brothers acquired Strathisla Distillery that produces the Strathisla single malt used in the Chivas Regal blend. In 1997, the Chivas Regal range was expanded with the launch of Chivas Regal 18 year old, and in 2007 with the launch of Chivas Regal 25.

The nose is lush and fruity. Vanilla and orange peel are at the forefront, followed by honey, a delightful maltiness and a touch of ginger.

The palate is light-bodied and just a little bit dry. Honey and ginger are back, together with vanilla fudge and hints of dark chocolate.

The finish is of medium length and fruity. Oranges, vanilla and honey round this one off.

This is a fruity and well balanced blend, and it is a step forward compared to the 12-year old. While I quite liked the nose, the palate was too watery for my taste. This one would definitely benefit from a higher ABV.

Chivas 18 is a uniquely rich and multi-layered blend that includes over twenty of Scotland’s rarest single malt Scotch whiskies. With 85 flavour notes in every drop, each sip is a new discovery.

What did I think.

It feels smooth but thin in the mouth. I thought for an 18 yr it lacked the punch and sophistication I expected.

This has been an old favorite of mine for years, but now that I have discovered the joys of single malts, this remains as the only blend that I would still buy. Granted, I have yet to get my hands on a bottle of highly rated Ballantine's 17, but I am happy with this one. The only problem is that there are better and cheaper single malts available, This one runs $65 US and I appreciate the blending job that they have done with this one.

Bourbon oak casks were obviously used in the aging, since I can taste those leather hints associated with fine bourbons. It is not too sweet, and has just barely enough smoke to let one know that they are drinking scotch. A very good blend among stiff competition from good single malts.

You might try Buchanan's 18 YO Special Reserve. It's about $55 BT here and is a very good blend. It makes me feel like I should be in a large leather chair in front of a smoldering fire in my mansion's library. Good stuff!

I tried Buchanan's 12 year old and hated it. The very weird spout for pouring also ticked me off immensely. I swore off Buchanan after that. I gave most of that bottle away.

Chivas is one of the top blended scotch whisky from Perno-Ricard along with Ballantine's. Originaly blended by yet another early 19th century grocer. Actually, a pair in this case: the Chivas brothers. Along with the Walkers and Andrew Usher, they started the whole blending thing, to insure quality and consistency. The Regal part came from the fact that they were appointed by Her Majesty the Queen Victoria, initially as providers of groceries to Balmoral castle, and later as whisky providers.

The 12 YO is you regular heavily branded stuff. You know, one of the bestselling one, for many the synonym of scotch. Ok, at best.

But the 18 YO is quite another story altogether. The Russian Gold liquid is full of character and surprises.

The nose is complex and inviting: sherry, black chocolate, leather, tobacco, plantation or demerara sugar and nuts. It's speyside at its best.

In the mouth it's a vanilla and fruit cake party. The chocolate and the leather are also both invited.

Adding a bit of water bring forward some very nice maltiness and some good chewy caramel.

And the finish is a nice vanilla sotness.

This whisky is built on top of the Strathisla single malt from the oldest higland distillery, dating back to 1786. And it's an amazing cornerstone malt, one of the best to build upon, along with Cragganmore.

Saying that I loved it would be an understatement. I tasted it during a session with about a dozen of friends and familly members, and we all agreed that this was THE surprise of the evening.

I just bought a bottle of this and it is foul. This is the 4th bottle I buy and the other 3 were really nice, all the same .. this one smells nothing, tastes like very sweet start and ends with a huge explosion of eucalyptus .... What is it that I have in my bottle, maybe I should go through the trouble of sending it to Chivas.

why not. Send them an email or call them with your grievance and ask them how to proceed. Let us know how it goes.