Average score from 2 reviews and 2 ratings 87 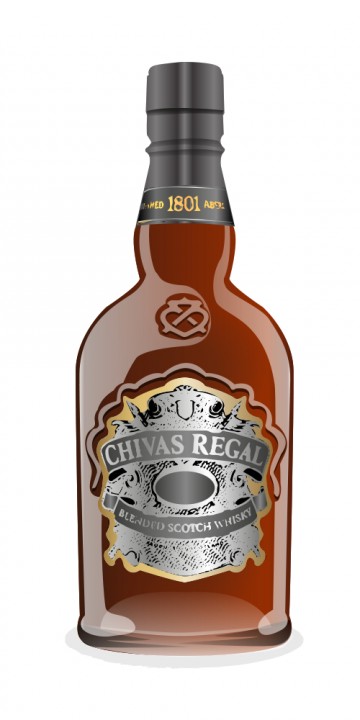 I'm suspicious of expensive whisky and enthusiastic about cheaper whisky. I think that there is so much exploring to do below £50 that you could live your whole life in a state of complete satisfaction and never spend more on a bottle. There is absolutely no denying though - this is money well spent, all £160 ($260).

I read that Strathisla is the backbone here, but like any great malt Chivas is it's own master. Even uncorking it is an experience, the stopper itself hinting at the luxury within followed by a beautiful clarity on the nose.

Nose: Marzipan, oranges,peaches, a first flush of chocolate. Professional tasters get nuts, I don't. Pronounced, it would be aggressive if it wasn't so smooth.

Mouth: Chocolate. Chocolate in a way you don't get with any other whisky i've tasted. It lends itself to the orange/peach rush just behind it for a classic marriage I just didn't think I would taste in whisky and it takes that tingling spiciness and just tames it. I get a gentle earthiness too, and then a touch of nuttiness (for the first time) but this is a whisky greater than the sum of its parts. Very very full and silky in the mouth.

After: Gentleness abounds, incredible after such a complex experience up front. Smoke is the new addition.

Hard to recommend at this price but worth dropping some hints over with Christmas on the way...

You've something to look forwards to then! I haven't actually tried the 18, oddly, just the 12 which I wasn't desperately keen on. The 25 is just complicated. A complicated bottle. First two glasses I had I was underwhelmed - by the end of the bottle I was raving about it.

Great review! I've always wanted to try the famous Chivas 25. I enjoyed the 18 Year Old at a whisky dinner at the Aberlour distillery in May. Nice, but I found it a little overrated (especially next to some fabulous Aberlour's at the dinner!) But the 25 is high on my list to try one day.

My wife has taught me many things since I've met her. She's taught me how to deal with adversity, how to handle homesickness, how to love conditionally.

And how to appreciate whisky.

So my wife and I went to Melbourne for our honeymoon. We wound up going on our honeymoon four months later than we were married because money had been tight, but we'd wound up getting some airline tickets to Melbourne semi cheap and we had wanted a honeymoon so we decided to go. Now my sister in law and her partner whom I call my brother in law, and one of my wife's best friends decided to also go. This should be good!!

Now I'm a whisky man as is my brother in law, always have loved a good whisky, and our honeymoon proved it. I think I had whisky at every meal, except breakfast, and I would of had it at breakfast if we could find a place that did scrambled eggs with hash browns and sausage with some Glenfiddich on the side.

Now I say I've always been a whisky man and that's the truth, but up to Melbourne I'd drink my whisky in a whisky and coke or if it was a higher quality whisky I'd drink it quickly from a tumbler, never stopping to appreciate the bounty that was in front of me.

My wife changed that.

Now Melbourne is known as "The Food Capital of Australia" and my brother and sister in law had done quite a bit of research and picked out many different awesome restaurants to visit, some of which have been featured on Australia's MasterChef. Now as my wife and I are big fans of MasterChef we were happy to go along with this suggestion.

The very first one that we went to was Jacques Reymond Cuisine Du Temps. It's like this quasi Asian, French, Australian blend. Which is very very good. And very very expensive.

When we walked into the restaurant it looks a little bit like walking into your grandparents house. All hard wood floors, lovely Victorian furniture and a dozen tables in the dining room we're led into. As we walk into the dining room in a little side room we glimpse Jacque Reymond.

We notice him immediately!

He does not notice us.

The waiter brings us the drink menu and we all order.

But I'm a whisky man! I like whisky! Chivas is a great whisky (This is before my enlightenment which occurs later in this very trip.)

So I glance over at my wife and she says "Go for it babe!"

Now we wound up getting scallops, yellow fin, prawns, squid, pork and kangaroo along with some vegetables (vegetables give you cancer so I don't eat them. Period.)

I'd actally received my bartending certificate so I actually had studied the different spirits and considering that I used to drink Makers Mark, Knob Creek, Jameson, Crown Royal, and the grand daddy of them all, Chivas Regal, I thought I knew a lot.

Melbourne taught me how much I didn't know. How much I had to learn. And it started with this Chivas Regal 25 year old.

So I briefly nose this tumbler of Chivas 25 yr old. Because isn't that what you're supposed to do.

The smell that comes is something that knocks me out of my boots and then starts to take me clothes off. It's fruit, lots of fruit! I can't put my finger on what all kinds of fruit there is but peach, oranges and lychee(?!) comes through fairly strong.

This surprises the hell out of me, because up to this time the main smells that came through my whiskies was vanilla, occasionally honey, and lots and lots of oak.

I start to nose the glass more and more to see what I can get, yep there's the oak. I knew it had to be there!!

But I'm still flabbergasted. This is the first time for me that strong strong smells were to come through a whisky right at me.

I start to sip the whisky and I notice something immediately. Something that doesn't surprise me.

But through that I notice chocolate and nuts, but again the oak rears it's head! But I continue to sip and slowly the burn starts to recede. Slowly I'm able to appreciate the more subtle hints that run through this whisky.

The finish is looooooonng and it burns all the way down.

I was so surprised by this whisky and the way that it made me reevaluate whisky and my relationship with it.

This whisky started a whole new journey on this trip, a journey that took my wife and myself crawling through restaurant after restaurant, enjoying world class aussie food, sampling new whiskies each and every time. It led to my wife trying each and every whisky with me from that time. It led to my wife and I discovering Glenfiddich Snow Phoenix on the night of our anniversary.

But it helped changed my wife's and my life and for that I'd like to thank the guys who made it.