Average score from 4 reviews and 14 ratings 85 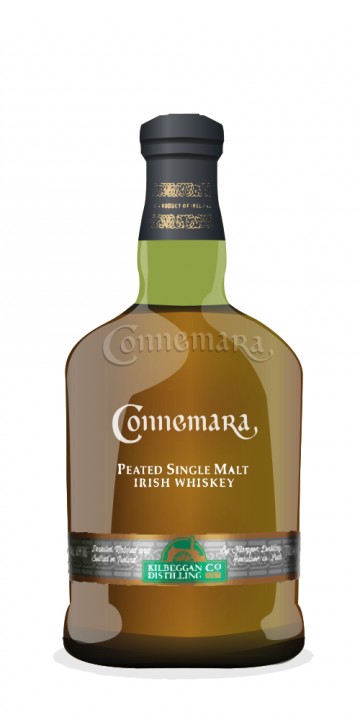 I remember stating once that Connemara Peated was a contender. So this 12YO Connemara has to be a higher ranked competitor.

Nice with malt and smooth notes, yet offering that peat smoke in a surprisingly heavy way (40% ABV). Cooley proves with Connemara, that they can make top quality peated whiskeys – as promised with Connemara Peated.

Since I'm talking with boxing terms, I’m gonna call the 12YO a great light heavyweight, like Billy Hope (played by Jake Gyllenhaal) in Southpaw.

Nose: Strong yet smooth peat smoke starts the show, turns into a mix of homemade wine and light ginger ale over time. After that it turns to wet peat and soil. Little bit crispy with hints of citrus sourness and lemon peel. Drops of water brings fruity notes.

Taste: Peat smoke is there again, right from the start. Some malty notes in a smooth but peaty and mildly fresh palate. Citrus notes and orange peel.

Finish: Nice length with peat smoke, again. Fruity green and nutty – green apples are present in the aftertaste. Water adds more of that fruity feel, yet for a brief moment, there’s a spices with a burning smoke note. A sparkle, like someone light a match.

Balance: Very smooth peated whiskey in nice balance. Light, yet heavy if I may say so? Interesting whiskey.

Did the Irish invent whisky? I don't really know for sure. But I do know they're pretty good at this game and this peated Connemara is an example of that.

The delicate honey and sugarcane nose is quite fresh and wafts lazily over the smoky peat on the bottom. Sway it gently and up comes a zing of bright lemon. Very playful.

You know the distiller has done his job when the nose is in sync with the delivery. The honey, sugarcane and lemon on the palate are testament to that!

The minty medium finish is a touch on the shorter side but over all this is quite a pleasant dram.

Nose: A huge explosion of fruit, with raspberry, pineapple and banana flying out in all directions from the wet lawn and soil below, before finally being contained by a fire-mat of seaweed and iodine. The combination has all the hallmarks of a medicinal herbal sweet, however underneath there are some further intriguing notes of carrot and wheatgrass, as well as shortbread covered in sour cream. A typically wondrous Connemara nose. 2.0

Taste: A seductive wave of vanilla-soaked coal smoke, followed by an intriguing melee of salted peaches and sweetened broccoli, all served up in an edible coconut shell bowl. A flavour profile that is once again uniquely Connemara. 2.0

Finish: The show is closed with another explosion, this time of a more traditional kind with fire and smoke billowing out plumes of vanillas, charred pinecones and sweetened milk. As the dust settles we are left with our familiar Connemara protagonist Banana, as well some closing cameos from salty beach pebble and flower stem. An engaging cast. 2.0

Balance: Despite still being at only 40% ABV, the Connemara 12 year old is very much a more marauding version of the standard Connemara, which is in itself a very unique peated malt. The peat here is as ever very subtle in its delivery, and is served up on a mesmerising palate of exotic fruit and vanilla cream. This is a unique whiskey that will always stand out in any tasting session, no matter what it's up against. That's not to say it will necessarily be better or worse that whatever else is in the line-up, however you can be sure that you'll remember tasting it at the end of the night, and for most it will be a very happy memory indeed. 2.5

@AboutChoice You are right, I am also gonna try it for sure.

Sounds like a vegetarian delight! :) Good, edifying review, @OJK ... will have to try this one.

This lightly peated Connemara (only 15ppm) was released in a limited edition of 7000 bottles. It wond a gold medal at the San Francisco World Spirits Fair.

Taste: sweet and sour battle for supremacy. It does seem a little watery, though. Light almond and even lighter smoke. Touch of mashed banana. Quite a bit of oak. Hint of mint.

Finish: Gentle with a bit of smoke.

This is the kind of whisky that you’d put on the table while playing cards with friends during a winter night. And at the end of the game, the bottle’s gone and nobody minds!