Average score from 6 reviews and 7 ratings 75 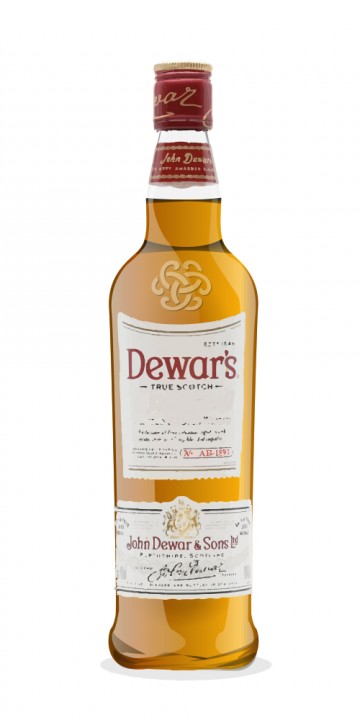 An intense orangish to amber pour. Aroma is quite sweet: crème brûlée, vanilla, ripe banana, even sweet potato (oh yeah! Never found that one in a whisky before.) Soft and sweet as you start. Mellowy sip. Long-lasting finish with tinges of orange peel. I know, I know, it's ultra-industrial and mainstream and full to the brim with sweet scents, yes, but I found it interesting. Good? I said interesting.

I'm amazed I've never reviewed any Dewar's here, but then again I've only really had the 18 Year Old (at a bar in NYC) and the Signature (at Whisky Live in Toronto one year). I've never even tried the ubiquitous White Lable. Oh, and I did review Aberfeldy 12 Year Old, which is the heart of Dewar's and where you can find the Dewar World of Whisky visitor centre at their distillery (I've never been).

Besides Aberfeldy, Dewar's also has Aultmore, Craigellachie, Royal Brackla and Macduff, among others I am sure. John Dewar started the business in 1846 and would marry the blended whiskies in oak to better integrate the flavours, which wasn't really done at that time. Dewar's has a Royal Warrant (supplying the monarchy with the booze for over 100 years) and was bought by Bacardi in 1988, who have done a good job of rebranding the whiskies in their stable. The 12 Year Old is now called "The Ancestor", apparently after John Dewar; and no, I don't understand that either. This bottle was a birthday present from my brother, and has been open for about 3 months.

The colour is honey-gold. On the nose this is quite fruity, with orange, kiwi, papaya, lime and peach, all intermingling. Burnt toffee. Exotic spices like tumeric and saffron, and the faintest hint of peat. With water the citrus brightens up, and the peat steps forward a bit. Very nice.

On the palate, more orange shows up (and a bit more peat) but it's mostly caramel and citrus, with some baking spices (nutmeg, cinnamon). Water helps keep everything integrated. Not bad but not as complex as the nose.

The long finish is spicy with anise, followed by bitter oak and dried fruit. For me, the nose is the highlight, and becomes a bit of a letdown by the time the finish arrives. Still, not a bad premium scotch at the right price point.

Birthday presents from siblings are good things. That's probably the sort of way I would wind up with Dewars 12 too.

Thanks for your review. Looks interesting in a fruity way prior to a bitter-cum-licorice finish. Seems like I've seen a few blended Scotches which have this sort of evolution you describe, including some ancient Chivas Regal 12 yo I have on hand.

That's a good plan...or a sample from someone's bottle.

But, if you try it from an older bottle and review it be sure that people don't expect that that's the way it tastes from recently released batches.

While waiting the 50 minutes in the lobby before being admitted to the Last Great Malts of Scotland (2 nights ago) I was offered a modest dram of this 12 year old blend. We were told "only one per person"...that was plenty for me. Given the delays in starting the event, I had plenty of time to write some notes on a clean palate. Not as extensive as a normal review but here goes...

The bottle was probably opened the day of the event and the air time was likely between 10-30 minutes. No water was added to this dram served at the "high" ABV of 40%.

Nose: Sweet, fruity. A touch of spice and honey. Not very complex but pleasant. 21/25

Balance: Smooth, forgettable, nose is nicer than the palate. 20/25

I'm admittedly not big on blends. Many of them are underpowered at 40%. I've had a few that weren't too bad, but they were either at a higher strength (Cutty Sark Prohibition) or malt blends (JW Green), or both (Peat Monster).

I called this a Throwaway review because it was quick and simple, but also because it described what I did with the second half of my dram...

@Nozinan. I'm not much of a blend drinker either, but sometimes, like on long flights, that's all that's available. You can usually get JW Black in those situations and I find it quite drinkable. I thought I might try the Dewars 12 sometime, but I'll take heed of your experience and continue to give it a miss. So much Scotch, so little time. Best not to waste it on dubious drams. Cheers.

NOSE: having just opened the bottle I got marzipan, slight peat, toffee and vanilla. With a drop of water peat drowns altogether, leaving vanilla and creamy fruits.

FINISH: short and sweet with a hint of cola.

would you buy this over the JW black?

Nope) jw black does it every time for me)

One would think that a very popular 12 year old scotch blend such as Dewar's would be a bargain at $30. Guess what? I paid too much because it will get slowly donated to my neighbor to mix with Coca Cola. Now I know why I never order Dewar's White Label in the Superdome watching Saint's games. No more Dewars for me! Not only does it taste like cleaning fluid, it also brings on the nightmares, which tells me that there are still impurities that lie within. And no, I will not try another bottle.

Newkophile: Thanks for reminding about this review and I wound up lowering the score to a "9" because only a few drams got both my neighbor and myself extremely ill. I wound up pouring the last 8-10 ounces down the drain. Maybe I got a very bad bottle, but I will never touch Dewars again as long as I live. Johnnie Walker is almost as bad and they have their loyal drinkers buffaloed. For good cheap blends, try Black Bottle or Ballantines. However, I am now spoiled by single malts that have NO GRAIN ALCOHOL. No telling what ruined that bottle of Dewars and I don't want to know.

Extremely unfair review IMO. OK, this is not a single malt but as blends go, Dewar's 12 is quite smooth, exhibits an enticing nose of pear, vanilla and honey and is eminently drinkable. Certainly a preferable dram after having attended a small wedding reception at someone's home this past weekend where I imbibed neat the only Scotch available, the somewhat harsh and inexplicably popular best seller, JW Black.