Also, the Butter Tart Festival in Midland is something I've been wanting to go to for years. Hopefully next year!

@YakLord I may have to try that recipe. I've never made my own ice cream but there's a first time for everything. If you make it out to Midland next year, let me know; we can meet up for a dram or two.

@OdysseusUnbound with or without raisins?

@Nozinan I'm good with anything, but prefer pecan, and a semi-runny inside.

@Nozinan It’s not a butter tart if it doesn’t have raisins. I will die on this hill.

@OdysseusUnbound some of the best tarts I have had were from Sudbury. They come plain, with pecans or, my favourite, with raisins. They are a little runny and there is a crystallized sugar crunch at the bottom. Thank you @paddockjudge foe introducing me to them. Or them to me.

@OdysseusUnbound I'm right there with you, brother.

@Nozinan Walnut pieces and currents work too. And runny is good. That's the general Canadian version. Pecan tarts are a whole other treat. More chewy, but equally delicious.

@BlueNote My mom made a version with raisins and pecans. Heaven. Sadly, my siblings are uncultured heathens who don't like raisins so mom makes some without raisins too.

Butter tarts from Golden Grain Bakery in Sudbury....for many years, I often enjoyed two butter tarts (plain, raisin, or pecan, depending on availability) every Friday with a generous pour of bourbon. @Nozinan, @OdysseusUnbound, @YakLord, @BlueNote, @Timp, @RianC, my favourite pairing was Pecan Butter Tarts with Booker's Barrel Proof Bourbon, especially the 2015-01 release, hard to go wrong with a good bourbon of any kind and couple of well crafted butter tarts.

@Victor, we should have this pairing at our next get together....I believe we may have already done so, but a reboot would, no doubt, be delicious again.

@paddockjudge my blend of 4 of the other 5 2015 batches (2-6) tastes closer to the 2015-1 than any individual batch. But I would be willing to dig into my bunker for the real thing if it meant those bitter tarts.

Assuming, of course, that one day I will be able to taste bourbon again…

@paddockjudge BUTTER tarts. They are the furthest thing away from bitter.

I miss my blackberry.

@paddockjudge @Nozinan yes, we know that bourbon, and we know those tarts. Another iteration of those is always welcome! That 2015-01 Booker's remains my favourite batch of Booker's ever. Which is saying something.

@paddockjudge I worked for a paralegal in my early 20s and every Friday she came in with a dozen freshly baked chocolate chip cookies from Golden Grain. Oh those cookies!! Great, now I’m hungry…

Canada Day! What would it be without the traditional BBQ?

I can’t drink whisky yet, but I can grill meat.

Earlier today I went to my mom’s and she talked me through my first sponge cake. It came out very well. My mom thinks she’s not going to be around much longer so I’d better learn sooner than later. 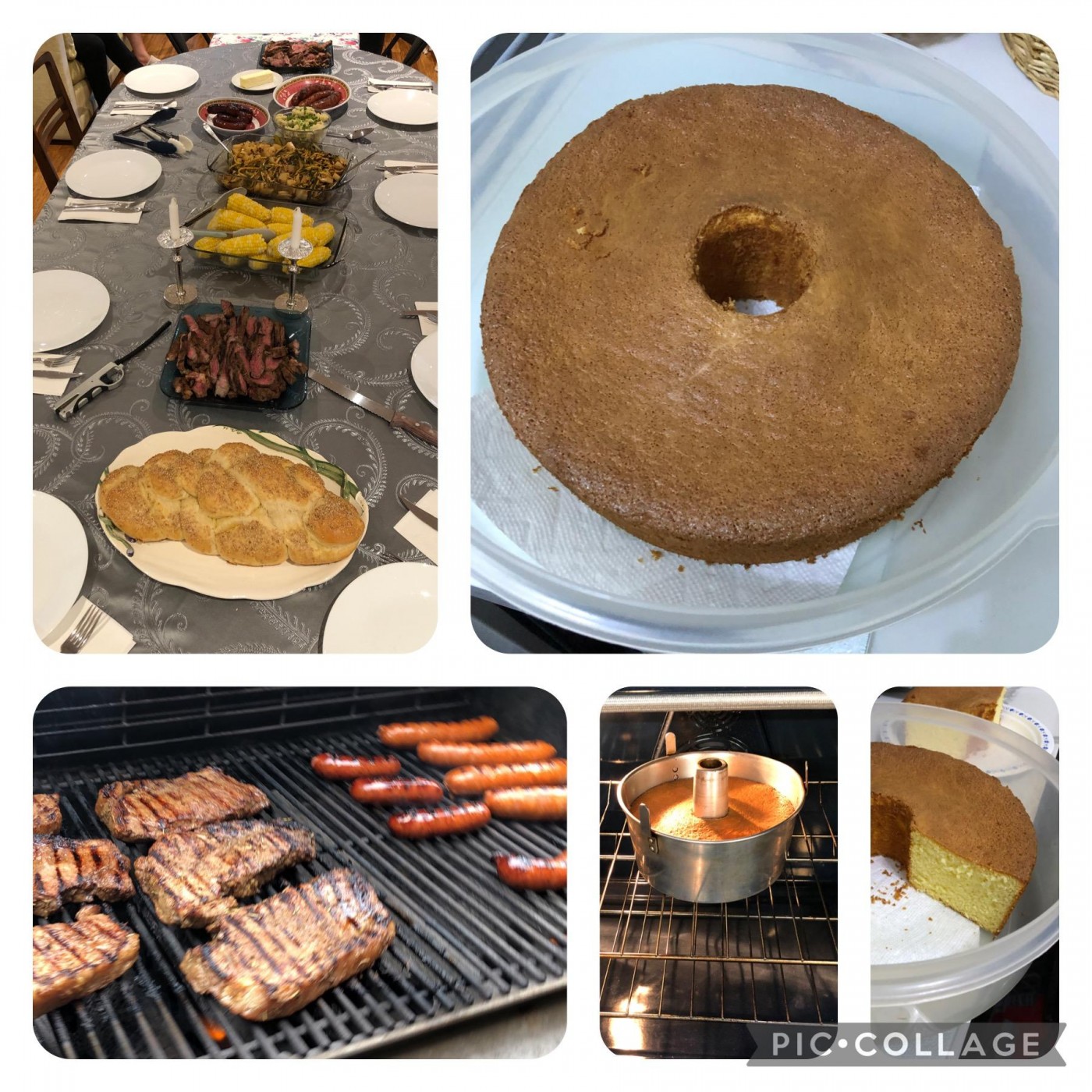 One of my new favourite recipes is this 'cowboy beans' from the Hairy Bikers. Doesn't look like too much but the sweet to savoury to spice is just devine.

She also made some chocolate cup cakes with the boys ... Yum 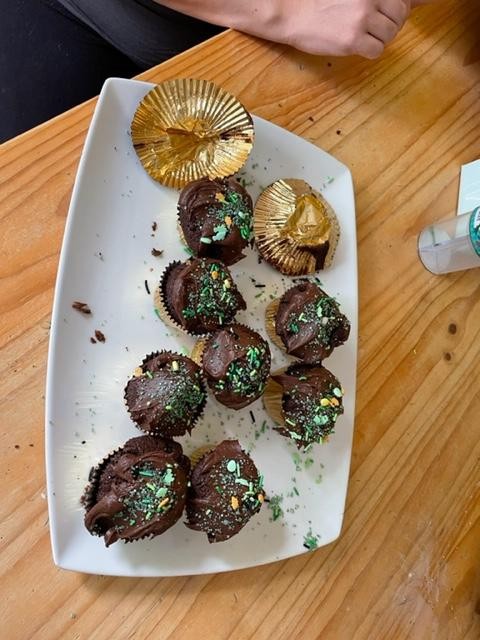 Pressed Belly of Pork with Apple, Parsnip, and Turnip Puree, and gravy...an appetizer for this afternoon's Thanksgiving dinner... 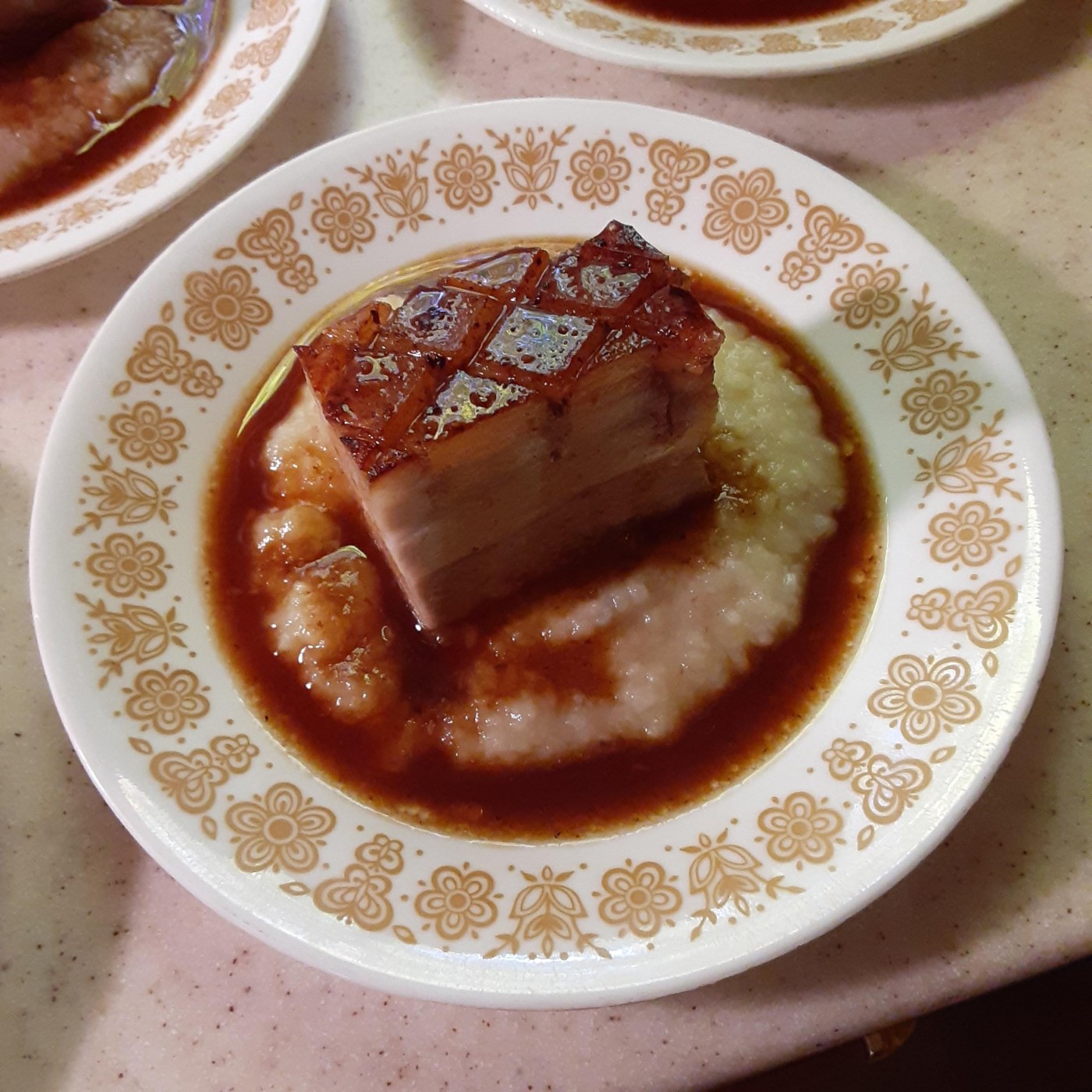 My sister in law showed my wife (her sister) and my brother's wife how to make a Chinese steamed pork belly dish today. It's not one of my favourites by any means, but I do like to use pork belly in some Korean dishes. But it's something I can't share with my cardiologist, or he would prescribe a lot more cholesterol medication...

@Nozinan Thank you! It was pretty tasty. But definitely served in very small portions (although the recipe suggests it as a side dish, with substantially larger portions. I think it works better as a small appetizer).

The Chicago Mercantile Exchange futures frozen pork belly market disappeared a few years ago as commercial interest shifted away from use of the frozen product to near exclusive use of the fresh product. Pork Belly futures trading was legendary for its volatility.

I thank my very good friend @paddockjudge for posting this discussion topic. @paddockjudge and I have shared quite a few meals together, all enjoyable.

I have not posted descriptions or pictures of meals I have prepared or eaten previously on this discussion not because I am uninterested in food, but primarily because I regard food as sacred. I am sparing in my discussion of the sacred, particularly at a distance over electronic media. Whiski is also sacred, of course, but the relative remoteness of the opportunities to enjoy whiski face to face motivated me 11.7 years ago to select this club as a means of further information gathering and sharing about whiski experiences.

Who "invented" 'The Calculus'? Many credit both Newton and Leibniz as having put forth these ideas more or less simultaneously and without material contact with one another.

Who first invented the nickname "foodie" for a food enthusiast/food hobbyist? I cannot say with absolute certainty but I can tell you that I vividly remember the day in March 1987 when, groping for words to describe myself as a food hobbyist I first started and consistently since continued to call myself a "foodie". It was more than FIVE YEARS after I first started calling myself a "foodie" to all who would listen that I first heard or read anyone else refer to her/himself or others as a "foodie".

I was married to Julie/@Dramlettte for 33 years before she returned to the spirit home of us all. Julie was a luxury hotel concierge at several hotels in Washington, D.C for nearly all of those 33 years. She worked at the Four Seasons Washington D.C., considered by many to be the "best" hotel in Washington, for 25 years.

As a luxury hotel "supply sergeant" for restaurant referrals to the 100s of upscale DC restaurants, she was offered hundreds of complimentary meals at places which would have been outside of our restaurant budget. The result was hundreds of fabulous comp meals enjoyed by both of us over 30+ years. As I like to say, "I've had more memorable meals than I can remember."

This said, like Julie, I appreciate the simple and homegrown equally to the exotic and expensive. But, I guess that I'd really much prefer to be sitting at a table eating the meal with my friends rather than posting about it on the internet. I certainly do enjoy and appreciate, though, the artistry shown by our Connosr members in the meals which they have shared on this discussion. I give my thanks to each and every Connosr member who has shared photos and stories about the food which you have enjoyed preparing and/or eating.

So, do I have a post about an experience about "Man does not live by whisky along"?

Yes, I do, but not in this particular case about food. I want to speak about my relationship with stevia.

50 years ago I diagnosed myself as addicted to sugar. At that point I stopped drinking sugared carbonated beverages and went exclusively to artificial sweeteners in that category of drinks. Those artificial sweeteners are not very healthful, so I long wanted something which was more compatible with health. People suggested stevia, but I never liked the taste of stevia. Why? Because I was looking for sweetness, and, to my palate, stevia is not just sweet, but is BITTER-sweet. I just did not want the bitterness included with the sweetness coming from the use of stevia.

So, what am I consuming now? Iced green tea sweetened with stevia. What has changed here? Well I discovered gradually that if the beverage or food to be sweetened already contains a bitter component to its natural flavours that stevia worked quite adequately for me. I went from actively disliking the taste of stevia to consuming it nearly every day.

about one month ago 9Who liked this?

No pics, but popped into what I assume was a Turkish deli earlier and picked up a slice of Mediterranean tart for lunch. Filo pastry with Med veg, olives and poppy seeds - delicious!

Got some 'wine cookies' too as they looked very appealing. A kind of cinnamon and ginger semi-sweet donut shaped biscuit. They were really nice too ... said my kids

Also made a chick peas and potato curry for dinner. One of those rare occasions where the spices were in perfect balance. I often put in too much ginger, which I love, but it does overpower a tad. A few boiled eggs in at the end too. A curried egg - what a treat 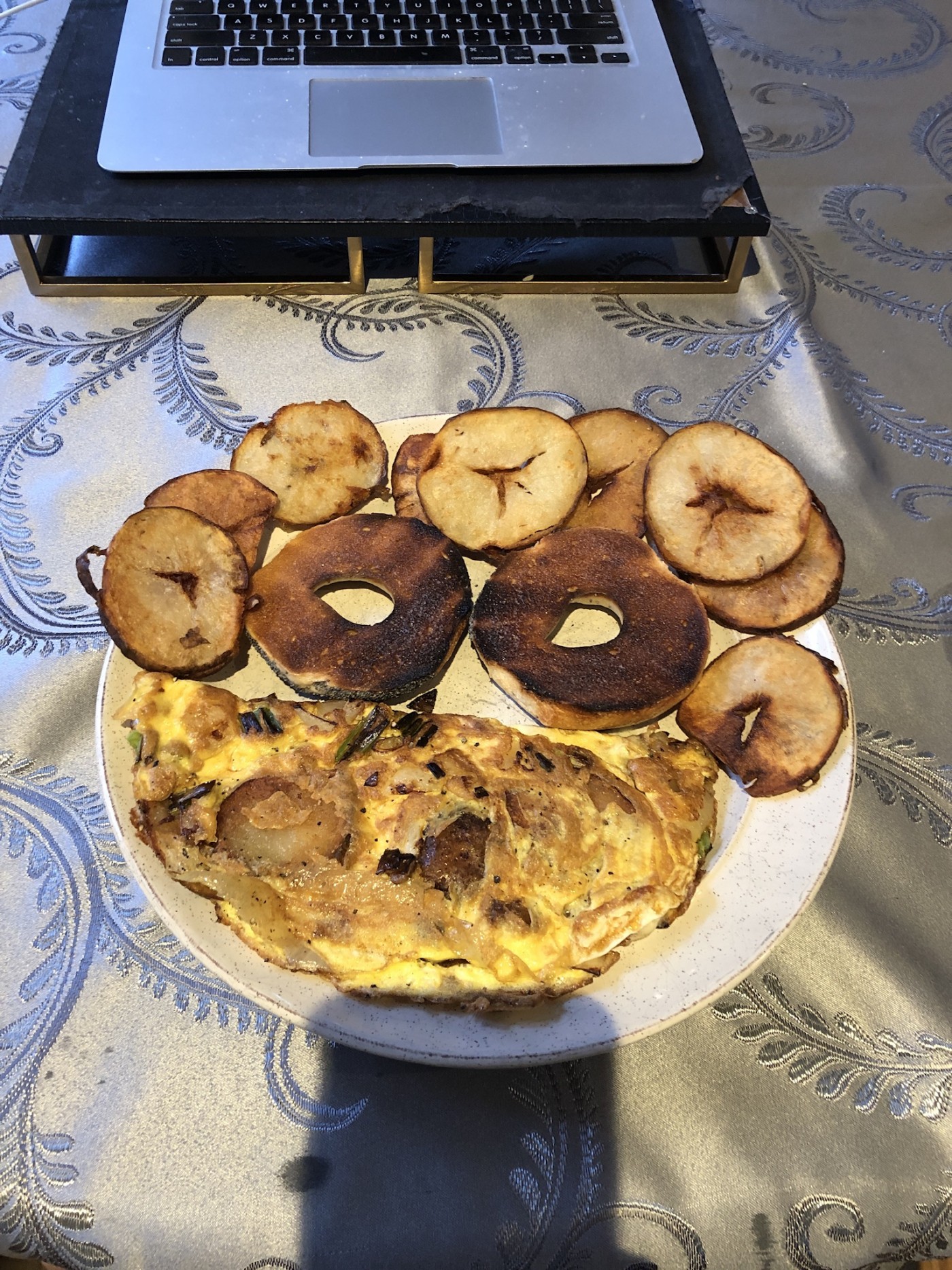 Having a few of my favourite things after a pleasant visit with my physician… received a flu shot, went for bloodwork. Celebratory meal or last supper? I should know by tomorrow. 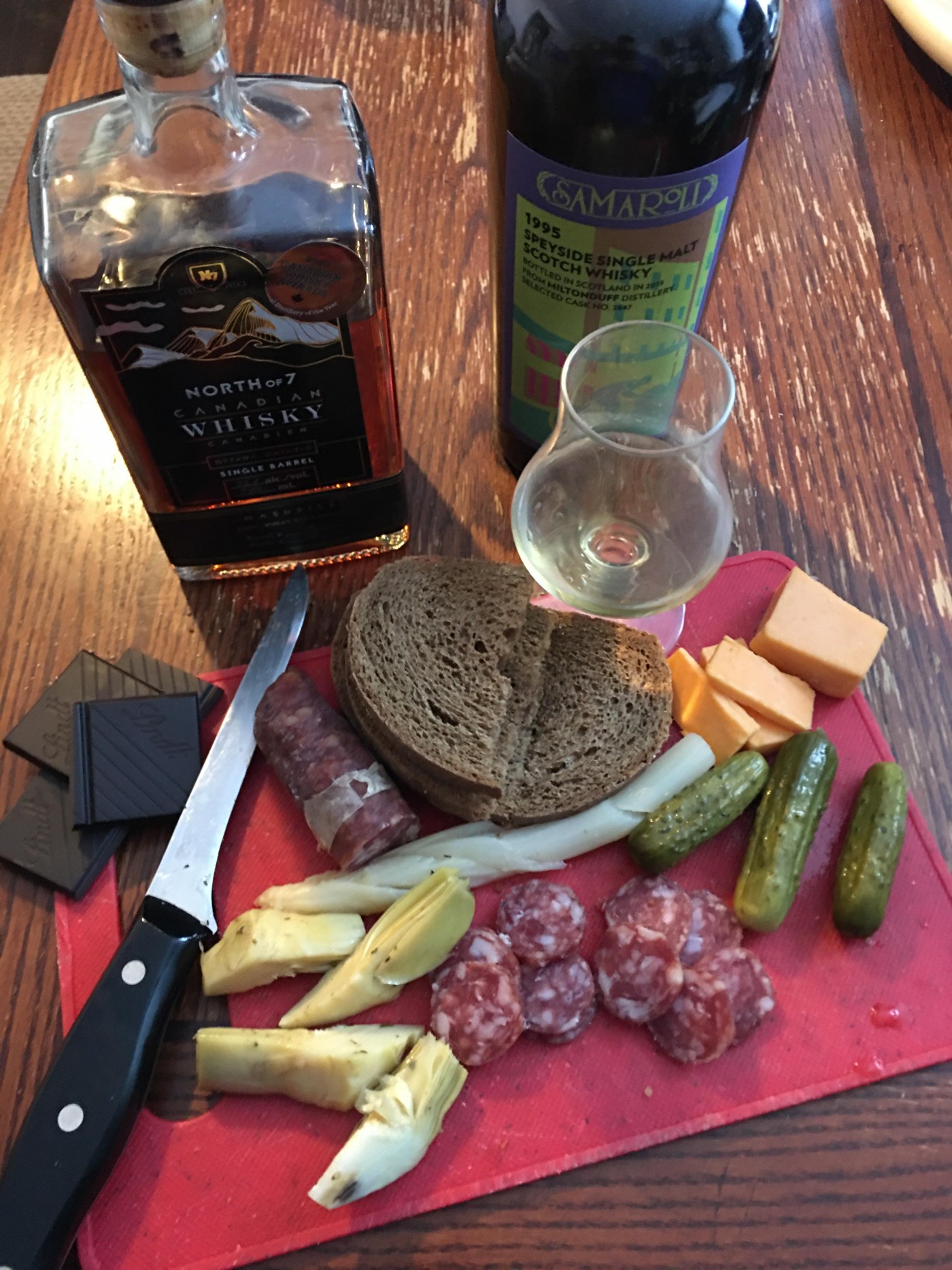 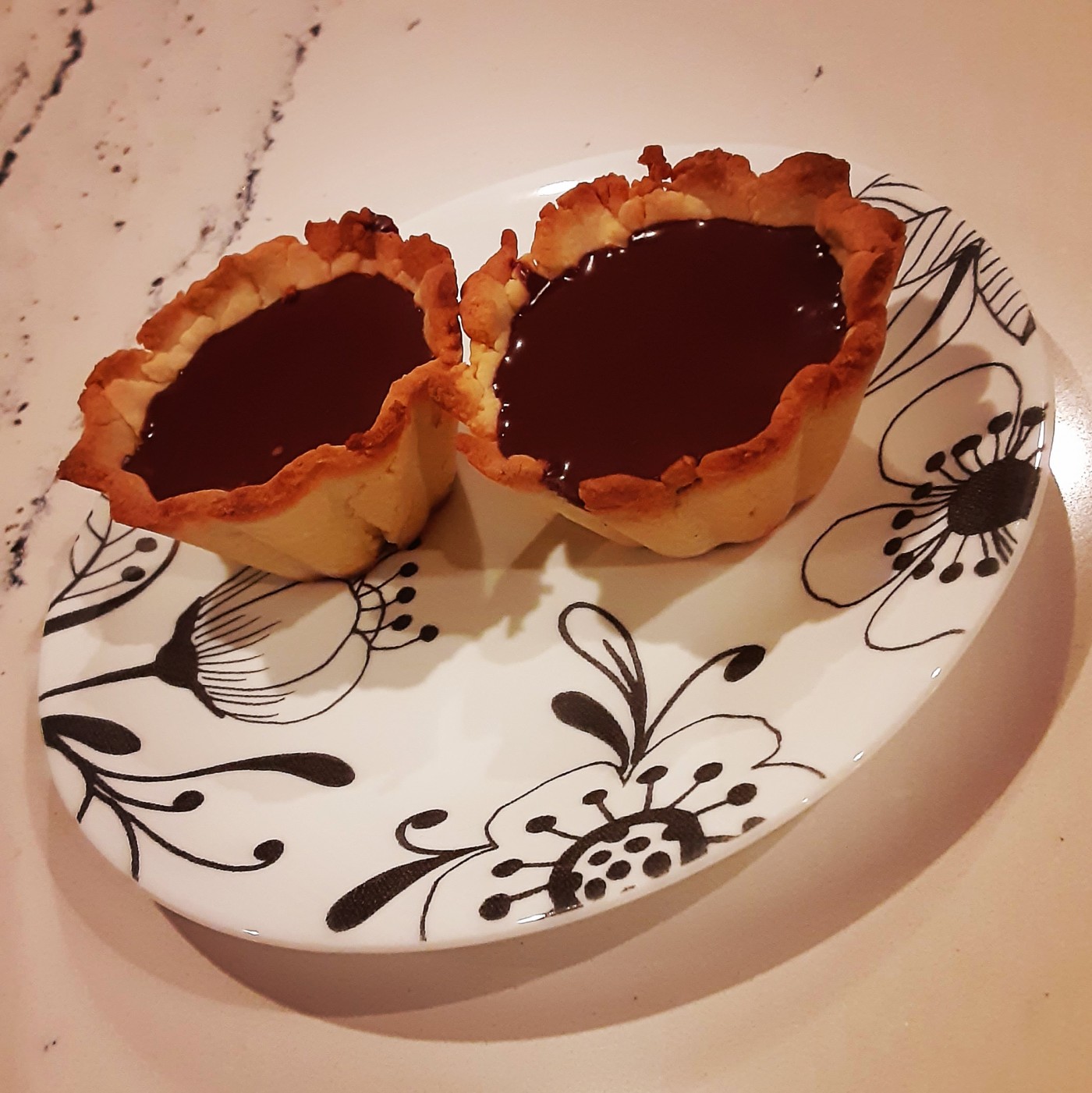