Average score from 4 reviews and 19 ratings 85 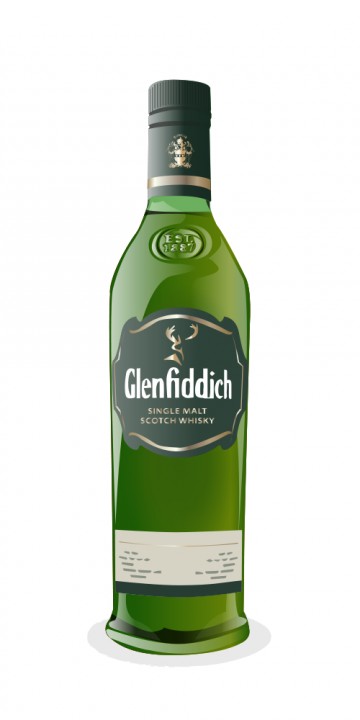 There is some whisk(e)y that are very good but not flashy in anyway. When you are drinking one of them, you may say to yourself that it is better than you were expecting even if you have known it for years.

Glenfiddich 15 yo DE, is one of these whiskies. Mayba because the 12 is such a reference to the entry level we are snobbing the older brother, I don't know. What I do know is that at 51% ABV, this DE is worthy of my attention and is not an entry level whisky.

I have an evolving nose here. At the beginning, I have oak, honey, kumquat orange and honeysuckle. After a few minutes it is going toward the sherry in that I have cayenne, ginger, allspice, mint and eucalyptus. The mint and eucalyptus are quite similar to the same notes in an high rye content bourbon. Finally, the nose end on some cedar and dried leaves.

The sherry is more forward now but is mixing itself very well with the oak and the honey. I find caramel in the sweetness of it and some bitter wood but well balanced. The palate is not as round as the nose mainly at the end when the sweetness loose ground to an aggressive mix of cayenne and ginger. The orange, kumquat, mint and eucalyptus are not as strong on the palate as on the nose making the palate less complex than the nose. After a while, I've got some lemon and terragon with my sips and the allspice is mixed with a hint of cinnamon. If I am swallowing my sip without making it swirl there is a nice candied orange

At the beginning it is a bit bitter. I don't mind but some will. On the long run, the honey and the leaves are playing their role and remind you that it is a Glenfiddich. When I breathe, I get the kumquat and orange back.

This bottle has been opened for many years and never beeen gased. Surprinsingly, it is still very close to what it was. The balance is fantastic on the nose, there is short time where the bitterness will bother a few on the palate and the finish pass from being ok to great with time.

I have neglacted this bottle for way too long. It is an all around player with great balance. I often find that the very well balance and complex dram received reactions like blend. They are neglected because they are not flashy. This one though as big enough flavors not to be bland and should receive proper attention.

@Nozinan No way, my friend. I have massive cabinet envy when I look at yours. (that sounds a bit weird, but you know what I mean).

@BlueNote I know what you mean. Of all the Glenfiddichs this is probably the only one within my price range that I would actually want to try, and possibly own if I like it. I never got around to getting it when it was here and reasonably priced. Sad fact, but there are enough others to keep me happy.

This is it: the whisky I've been searching for. Like a woman, you never know where you will find the malt of your dreams; I certainly never expected to find it in the Glenfiddich lineup.

After adding a splash of water, the aroma is pure heaven. Chocolate-orange, hinting at banana (thanks to Jim Murray for that reference), with just a slight, oily nuttiness. Perhaps not the most complex nose you'll come across, but the depth and balance are near perfect. I find it much more expressive in a brandy snifter than a Glencairn glass, incidentally.

The Scotch has a fairly rich body as it unfold across the tongue with sweet malt, sherry, and tingling oak. The arrival is Glenfiddich in concentrate form, reminding me just why this distillery enjoys such immense popularity. Snobs will claim it is because the taste is "simple"; but really it is because the stuff is damn good. If there is any peatiness present, I don't detect it at all, but who cares? The malt, oak, and sherry do such a lovely dance on their own. A dusting of cocoa rounds things off nicely.

The finish gradually dries but maintains some of the sweetness of the initial malt surge. No undue bitterness at all, just a nice, gradual fade consistent with all the flavours, a pleasant memory of the sip I just had.

Well, what can I say? This malt pushes all the right buttons for me. It exceeded even my highest expectations by a mile. The extra strength and non-chillfiltering does great justice to the Glenfiddich house style, apparently. Worth a second look from anyone who has already dismissed 'Fiddich. For fans of the 12-year-old, this should be a real treat.

An enticing review. I do enjoy the occasional Glenfiddich and have several in my cabinet already. I've always been curious about this one but managed to pass it up each time. Maybe my next purchase....

Interesting, I like the 15 and 18 but they are not so powerful, but more than 10% more abv should be a vast improvement, lets see what it costs here

The label says this malt has been matured in American and European oak casks, no other information is forth coming. As an offering from such a fine distillery the age, price and ABV seem appealing and it’s not a bad colour in the glass, quite a rich amber but that’s probably its best feature if I’m being brutally honest.

Rather dry on the nose with not much in the way of obvious aromas, a faint whiff of some toasted almonds perhaps. The high alcohol content is felt on the palate with quite a bit of alcohol burn, but not enough to require dilution. The flavours are muted without much complexity, I’ve identified with difficult some malty hints and some oak but this is pretty bland whisky. The finish is quite tame too which is not great from a high strength bottling.

Overall this is not bad whisky, certainly no off notes, it’s just dull. Most common-a-garden blended scotches are more interesting than this these days.

I'm curious, did you taste it with water or straight up?

This review is of a bottle opened 2 years ago. Scores are for when the bottle was open for 2 months. I will also comment on what the whisky tastes like now

Taste: good flavour translation from the nose; when first opened this was wonderfully intense with flavuor, crisp and delicious. After 2 years, the flavours reflect a rounded out and sweetened version, similar to the nose at 2 years

Finish: when first opened, this is the truly bizarre part: the finish lasts about 2 seconds. After 2 years bottle open, the finish is long, but the flavours are completely changed

@systemdown, a few words about changes in the Glenfiddich 15 Distillery Edition over time. This bottle was about 80% full at the time of the review. This was not because I didn't like it, but only because I have been sipping from so very many bottles these last 3 years. I gassed this whisky after about 14 months open, but the flavours had already shifted quite a lot by that time. They did seem to shift a little bit more during the 10 months since it was gassed, but they did not sour/bitter to any significant degree. I consider this to be one of the more delicate whiskies for preservation, and if I obtain another bottle of this Distillery Edition, I would decant it early. I liked the flavours best in the first 6 months after it was open. Now it is still quite drinkable, but it lacks the sharpness it once had. I would rate it around 82 at present.

This is a whisky which I would very much enjoy getting again, despite the unsettlingly short finish. I am not quite as attached to a very long and poetic finish as are some, but this one is downright unnerving, even for me. I have NEVER seen a whisky like this one, without a finish. Still, the flavours are really super here, at least they were for this batch which came out about 3 years ago. Hopefully a new batch of the DE will be just as good, maybe even with a finish!

Thanks for those extra "few words" @Victor! I find most whiskies at their best before 6 months so that seems perfectly reasonable. I find it interesting that the whisky changed under gas preservation - I know @SquidgyAsh has experienced a negative decline in some whiskies he had gassed but if the gas is supposed to be inert and form a protective barrier over the whisky, how is oxidation allowed to occur? Not enough gas used, or is there something else going on?

Strictly speaking, I know that the gas doesn't actually form a nice perfect layer over the whisky - it does combine with the air in the bottle to some degree so you don't get a full blanket effect at the best of times. Anecdotally, it seems that decanting is still the most effective way to preserve a whisky.

If you try a newer batch, do let me know if it has a finish! I think I'm with you though - I'm not very attached to a finish. If it lasts a good 30 seconds to a minute or more then that's perfectly adequate in my books, as long as it's pleasant! Bonus points for something new and interesting in the finish that wasn't on the palate. The length of a finish only makes up about 1/3 of the score for that aspect when I'm scoring. The other 2/3 are flavour, complexity and whether or not it begs me to want to take another sip.