Average score from 4 reviews and 12 ratings 90 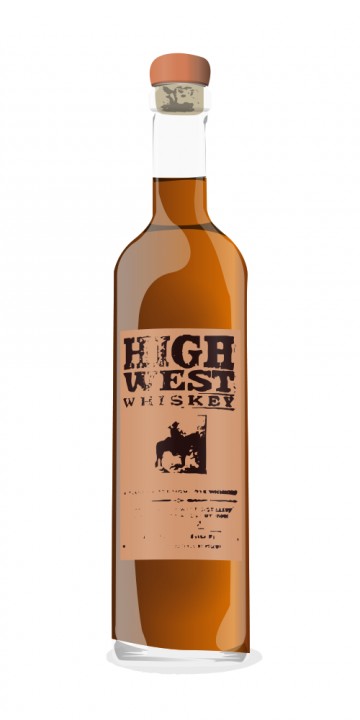 Nose: Smells fresh, on honey, rye grain, fir needles crushed, mint, then an assortment of some baking spices with cinnamon and dill/salt. Unabashedly rye. Toast and spun sugar. A little sweet and built to be enjoyable. New and unworn leather belt from Hermes. More rye spice and something off-sweet and spicy - a ginger chew?

Palate: Very silky on entry, and it hits the spot for drinkability. Quaffability, that's a bit more respectable. There's some oily quality to it, leaving it a touch bigger than its 46%. Honey, rye, spearmint, and then dry rye with oak, showing flashes of its age, and never out of step of heavy. Almost a bowling bumper keeping the ball going down the lane and right ahead toward the pins. Really well blended and delicious.

Finish: Some of the same honey, mint, and rye grain quality, with the oak playing a slightly larger role. Generally the finish seems a bit short. This is just a great and fun rye whiskey, and very well done. Not complex, but it hits the mark for entertainment, and it's a hit if you're looking for a rye and don't mind a few sprigs of crushed mint in the glass

Interesting that you get only a 'little' sweet in Rendezvous Rye. From the various samples from several bottles I have had, Rendezvous Rye has probably been the sweetest US straight rye whiskey that I have encountered, and really only one of two sweet ones in that category, the other being Wild Turkey 101 Rye (requiescat in pace et in Australia, for the moment). I guess that the spiciness in Rendezvous was just far more persuasive to you.

Ah, I actually did find it to be a little sweet -- not 'little sweetness,' if that makes sense. I could have been clearer, it would seem! Lots of honey and spun sugar. And mint.

I picked up this bottle because it is the cheapest straight rye whiskey available in Québec, by virtue of being the only one as well. After trying it, I feel I might have to try other to get a better pictures of what a rye whiskey is. I guess a road trip to Ottawa will be in order in 2012.

Nose: A clean nose of mint, vanilla, spices and some herbal touches. The mint is surprising, since I could not detect it in the actual taste, but I feel it was the dominant aspect.

Taste: A cool, sweet rush of vanilla and other sugars hits the tongue, with a good mouthfeel. Strangely, it reminds me of a wheated bourbon of all things (the Maker's 46). The rye makes its presence felt after a second or two, with an ever increasing spiciness, which never becomes harsh.

Finish: This is where it gets interesting: the rye spice is joined by the oak's cinnamon and the alcohol's warmth. The final has a good length to it, and the two competing spices really brings me in the holiday mood.

Balance: Big points here. I was expecting a hot, fruity and spicy whiskey. What I received was a well integrated, never harsh, combination of sweetness, spice and oak. A well-crafted whiskey.

That said, I'm left to ponder: is this a typical rye whiskey? Before the Rendezvous, I had tried 3 bourbons: the Maker's 46, the Elijah Craig 12 and the Bulleit Bourbon. The last two had strong fruitiness and spice (EC12) or harsh spiciness (BB), and I feel the 46 is actually closest to the Rendezvous.

Don't get me wrong: I love this whiskey. I was simply expecting something quite different. Will I buy another bottle? Probably not at the price (83.75 $CAD), but I will keep watching what comes out of High West.

@Zanaspus, the minty thing is typical of Lawrenceburg Distillers Indiana Ryes, which include Bulleit, Redemption, Templeton, and usage by High West as one of its principal ryes. My personal taste: I love mint flavours, but not in rye whiskeys.

Is Rendezvous a typical Straight Rye Whiskey? No. Rendezvous is one of the few sweet ryes, and that mint thing is only characteristic of a couple of distilleries.

High West Distillery in Park City, Utah, is the first distillery to be licensed in Utah since Prohibition. The High West distillery products have not yet aged sufficiently to be commercially marketed. The current Rendezvous Rye Whiskey, named after the annual summer trade gatherings in that area during the 19th century, combines a 6 yr old 95% mashbill rye whiskey with a 16 yr old 80% rye mashbill whiskey. Both whiskeys currently originate from another, unnamed, distiller. No information is given by High West concerning the remainder of the mashbill, but I would surmise that it is most likely malted barley, in order to increase enzyme concentration for the conversion of the grain starches into sugars prior to fermentation. The whiskeys in Rendezvous combine some malted rye with some unmalted rye. They are not chill-filtered

Taste: sweet, a lot more caramel than you would usually see in a rye whiskey, big, big rye spices, such as black pepper, cinnamon, cloves, and with substantial oak in the background

Finish: long, with all of the flavours staying together until the end

Balance: as a rye lover this one really works well for me. This is quite a bit sweeter than most ryes, which tend to have a dry flavour profile. The big spice, big oak, and above average sweetness here work well together. This whiskey has won quite a few awards, including Double Gold in San Francisco, a 95 rating from Malt Advocate, a 96 rating from Wine Advocate, and a 93/100 rating from Jim Murray's 2011 Whisky Bible

@AboutChoice, as to age, the vatting consists of 16 yo Barton 80% rye, 20% malted barley mash, with Lawrenceburg Distillers Indiana 6 yo 95% rye, 5 % malted barley mash. I don't know the proportions of the vatting of each of the two whiskeys included. What stands out to me about High West Rendezvous Rye is that it is much sweeter than the average rye whiskey, probably second only to Wild Turkey Rye for sweetness in a rye. A second distinctive element for HW Rendezvous is that the maple flavour which I alluded to in the nose is also very distinctly present to me on the palate. The wood tastes to my palate to convey a strong maple flavour which for me is the dominant wood flavour here. My bottle of Sazarac 6 is much drier than this and doesn't taste of Maple. My Sazarac 18 (2010) becomes quite sweet as the delivery develops on the palate, but the effect without the maple flavour is quite different. My bottle (2010 release) Van Winkle 13 yo rye is quite fruity, but is still dry, like a very dry red wine is fruity and dry. I have tasted Willett Bourbons which had this strong maple sort of wood flavour. I suspect that Barton, LDI, or both have been using wood that produces this effect. My first guess is that this is from the more aged whiskeys from Barton.

This bottle still tastes very good 5 1/2 years later. I've always found High West Rendezvous Rye to be satisfying in a way which doesn't lead me to want more than one dram at a time. Consequently, this bottle is still half full after all of these years.

I've always been fascinated that no one I personally know of, and no one reporting on Connosr, has ever had a bad experience with Rendezvous Rye except for Jim Murray, who gave more than one of the batches a mediocre or worse review. For most people most of the time High West Rendezvous Rye is a great choice to exemplify the straight rye genre of whiskey.

High West Rendezvous, distilled in Park City, Utah, is a blend of two straight rye whiskies: a six year-old (95% rye, 5% barley malt) and a 16 year-old (80% rye, 10 % barley malt, and 10% corn). It is not chill-filtered. I sampled from batch 44, the current batch available at liquor stores in Québec (and, presumably, elsewhere), at a restaurant in Montréal. I may or may not have started my meal there with deep fried cubes of foie gras.

The body is oily, the tears seemingly taking ages to form. The color is a beautiful, dusky copper brown. On the nose, I catch rye bread, caraway, vanilla custard, and a dank, earthy under-layer. The palate yields big surprises: with utter disregard for civility, there’s an explosion of spicy, slightly bitter, pumpernickel rye bread. It is unquestionably pumpernickel rye, with mushrooms spread abundantly overtop. The bitterness lingers on the back of the tongue, but a subtle sweetness balances the effect on the front, as if the tongue is a seesaw.

Given Utah's tempestuous relationship with alcohol—they remain among the minority of American states that continues to maintain alcoholic beverage control (i.e. a government monopoly on alcohol sales), and municipal governments can ban the sale of alcohol on Sundays if they so choose—this is a truly interesting whiskey. Not an "everyday" dram, but as a curiosity whiskey, it is compelling.

@AboutChoice and @Victor, I'm always happy to oblige with some background on the various distilleries, expressions, etc. I find the fact-finding process edifying, and love to share. I'm glad I'm not alone in this regard!

My bottle of High West Rendezvous is probably the sweetest US straight rye whiskey I have encountered. The only other US straight rye I have known to be significantly sweet has been Wild Turkey 101 Rye.

It is funny for me with the "High West" vatted independently bottled ryes: I like them all, but I usually feel sated after one modest dram.