Average score from 5 reviews and 8 ratings 78 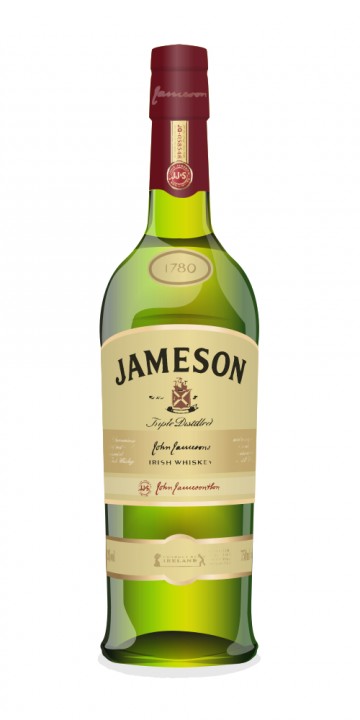 Picked this up today just out of curiosity. Jameson aged in stout barrels. Fresh bottle so dram has been sitting for about 30 minutes to air out.

Overall: This is a cool idea that I'm totally for. This is very smooth, inoffensive, and "nice." It left me wanting more flavor though. The flavors are a bit weak and this whole drink felt watered down. It's a sessionable whiskey if that's a thing. Would love to taste it at 50%+ abv.

Let us stick with Jameson for a moment. In 2014 they did a (‘pleasant’ in their own words) experiment with beer casks. Their Jameson Caskmates matured on old whiskey casks that had in between been used by Cork's Franciscan Well Brewery to mature their stout. More Caskmates are underway, I am told.

The nose is very sweet and reminds me of grenadine lemonade, but nothing else. Doh! This is a very inactive nose, to be honest. Quite a let down.

On the palate, I fear it is equally flat. Some chemical sweetness with vanilla and something candy-like, but that is it. Well, bar a little spiciness in the guise of pepper and nutmeg. Fruit? None.

The finish is medium long, but rather uneventful. More of the same.

And what is the influence of the stout, really? Probably the least interesting Jameson I have tried. Last seen for 35 EUR.

I tried this whiskey from 4 different bottles over a period of months and found it to be far too bitter.

Finish: somewhat bitter (could it be the hops?), but a nice fruity taste persists.

Balance: There isn't really a lot to recommend this whisky. Can't say whether it is better or worse than standard Jameson, but in any case it doesn't strike me as much of a departure.

Firstly, I don't drink beer. However, I'm still excited by Irish distillers experimenting with different cask finishes. I was looking forward to this whiskey. It's a standard Jameson whisky that has been aged for, well, whatever it's aged for, that is finished in Jameson whiskey casks that have previously held stout craft beer for 3-6 months before refilled with Jameson for a few months.

I like the coffee and dark chocolate profile. I applaud Jameson for trying something different. Unfortunately, the stout flavour conflicts with the whiskey and I don't care for it too much. I’m not put off by the unorthodox finishing cask. I have time for a wide range of whiskey tastes. The problem that this just misses the mark.

Please know that your efforts have not been in vain @Frost. I am a fan of stout, and I too, appreciate the creativity of the experiment. I was intrigued by the possibility when I saw the bottle, but was rather nervous about whether the Jameson profile could actually handle the stout influence. Thank you (and others...@talexander, iirc?) for taking the plunge. I will put my limited whisk(e)y dollars to better use. Now, go pour something from one of your better bottles to toast your efforts, and I will do likewise later today!

@Frost, thanks for the straight story. We need reviews that give us useful information.

County Cork's Franciscan Well Brewery decided to try pouring their stout into used Jameson barrels supplied by their neighbour Midleton; then, when they eventually bottled the stout they returned the barrels to the distillery. They then poured more Jameson into them, and whaddya know: you got Irish whiskey matured in stout barrels. Neat idea? Let's find out.

The colour is a medium copper. On the nose we get that youngish pot still character that you get with the regular expression: grainy and spirity with linseed oil, green apple skins and honeydew; but we also get hints of milk chocolate and green coffee beans. Tinned pears. Bandages. A little hoppy, which I recognize from the Wiser's Hopped (though the Jameson is not a flavoured whiskey like that Canadian is). A drop of water lets the grain breathe, with the fruit becoming more dominant. Pleasant but also a little bitter and slightly off-putting.

Oakier on the palate, with more hops, baking spices and very dark chocolate. Creamy mouthfeel. Some bitter black coffee. Unfortunately, the oak dominates the pot still character. However, water improves things, bringing out more fruits such as mango, papaya and green apple. Rather imbalanced between smooth and bitter.

The finish is also chocolatey but is rather mouth-pulling and, again, too bitter. As you may have gathered, the key words here are chocolate, coffee and bitter. These qualities worked brilliantly in Glenmorangie's Signet, but much less so here. There seems to be a drive to marry whisk(e)y and beer, as this and that Wiser's attempt to do, but for me it doesn't really work; in fact, this reminds me a lot of that Wiser's. But rather than getting "the best of both worlds", I'm getting the worst elements of each.

For anyone who wants to try this, look out for a Jameson "big mini" three-pack that seems to be making the rounds for Christmas. It has this, the standard Jameson, and some other odd one—special reserve or something like that, I think.

@talexander takes another bullet for the Connosr team. Thanks for the heads-up. A toast to your continued good health with a big hit of Jameson 12 Year old Special Reserve.