Average score from 3 reviews and 4 ratings 86 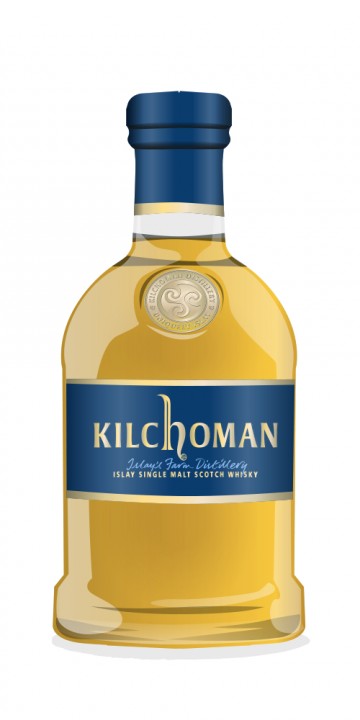 I have mentioned this in my previous reviews that after sipping my first Kilchoman I vowed never to touch it. I can't say which one it was because I've genuinely forgotten. Let's just say my brain decided to erase that experience from my memory.

What I do remember is wishing I could tell Anthony Wills, the founder of Kilchoman and who was presenting the whiskies to us that night, how I felt exactly. Out of politeness I did not.

But now I would like to tell him that his little Islay farm distillery is fast becoming my top rated whisky. Maybe of all time. Yes, you heard that right Ardbeg & Laphroaig.

Every time I review a good Kilchoman I offer Anthony an apology in the hope that he reads it and sends me something fantastic. As a sign of his acceptance.

The Loch Gorm that I am reviewing has been distilled in 2009 and bottled in the spring 2014 making it around five years old. It has spent it's entire length of maturation in Oloroso sherry casks making it the only Kilchoman to be completely matured in ex-sherry.

I don't know what the whole hue and cry about dwindling stocks and NAS whiskies is when you can turn around a successful product like this in 5 years and be completely transparent about it.

Must be the inability to charge a bomb for young spirits. So everyone hides behind NAS.

Thank you Anthony for being honest about your craft. #RESPECT

Luckily, this time Kilchoman released a bigger batch of the Loch Gorm so it was easier for me to get a bottle. Before I had one from a bourbon cask (Winter 2011) and some with a sherry finish (Coull Point, Machir Bay) So I was very curious what a full 5 years in an Oloroso sherry cask would do.

Finish: Big twiggy smoke, quite dry and salty with bitter woodsap and the oilyness lingers.

Without being even close to an age statement, Kilchoman manages to create an own character and some complexity in their whiskies well before they are 'old enough'. They do it with quality spirit in good fresh casks. Well done again lads.

Kilchoman is Islay’s youngest and smallest farm distillery. When Anthony Wills started his project in 2005, it was the first new distillery to be built in 124 years.

A portion of the barley is grown at the farm and is used exclusively in a 100% Islay whisky. The rest, needed for the core expressions Machir Bay and Loch Gorm, is bought at Port Ellen Maltings.

Kilchoman Loch Gorm is named after the peaty loch nearby. It is the primary water source for the distillery. This expression is the only one in the core range that fully matures in sherry casks. For the Loch Gorm 2014 they only used first-fill Oloroso sherry butts.

Tasting Notes Colour: Loch Gorm has a beautiful golden hue, still more towards the citrus side then you'd expect from Oloroso casks. This is partly explained by its young age. The colour is all natural and the whisky is non-chill filtered.

Nose: The first nosing reveals a stingy smokiness. Once the smoke settles down, a complex mix of fruity flavours is revealed. Canned pineapple and peaches with syrup and a coulis of cherries and red berries. The smoke is continually struggling to remain prominent and is likely to win the battle. A fire that has been built with wet and mossy wood. This whisky packs a lot of earthy aromas. In the course of time it gets slightly medicinal and somewhat rubbery. Think bicycle tyres. Some chocolate flakes and cloves also float around. Water really turns it into a doctor’s cabinet. Iodine bandages and Band-Aid. Rubber gloves and sweet grapes.

Taste: The first impression on the tongue is quite oily and warming. Again canned fruits and cloves with a generous dose of pepper. Oat biscuits with hawthorn berries. Water unleashes even more spiciness. Pepper and smoke take the lead. The fruit is really cast aside now.

Finish: The finish is very long . Slightly chemical and warming. The coulis of cherries has returned, with a few extra spoons of sugar.

Conclusion This was my first encounter with Islay’s youngest distillery. Just like Bruichladdich they market fairly young whiskies with a surprising complexity. The sherry flavours deliver that little something extra. This will be an excellent winter companion.

The first Loch Gorm already earned a Gold medal in the International Wine & Spirits competition. And I have a feeling that number two chooses to follow the same path.

It was launched in the first week of April and is now reaching specialist stores all over the world. Some 10.000 bottles were produced. This whisky will set you back something between €66 and €75. But as stock will diminish (it is only bottled once a year), expect to pay a bit more if you’re not a fast decision-maker.

Thx for those (too) kind words.

I still have to check out Ralfy's review. Fell asleep while watching it this night (has nothing to do with Ralfy, more with the 11th consecutive day at work). Should be interesting to note the differences and similarities.

I do think it is important to hold on to the newbie (or beginner's) mind. If it's reviewing whisky, the job, martial arts... Everything can and should be improved if all preconceptions and ego are left behind. Every whisky is a new experience and offers something new to learn. A scent, an aroma or even an English word. So probably within 5 years I'd still consider myself a newbie :)

According to your profile, you regard yourself as a whisky newbie. Your excellent reviews, articulate and informative, would suggest otherwise. I have only one Kilchoman (the Machir Bay) in my cabinet, and its quality is such that I'd like to try a few more of their expressions. Your review (as well as Ralfy's latest) helps much. Hope to see this one on the local store shelves soon.