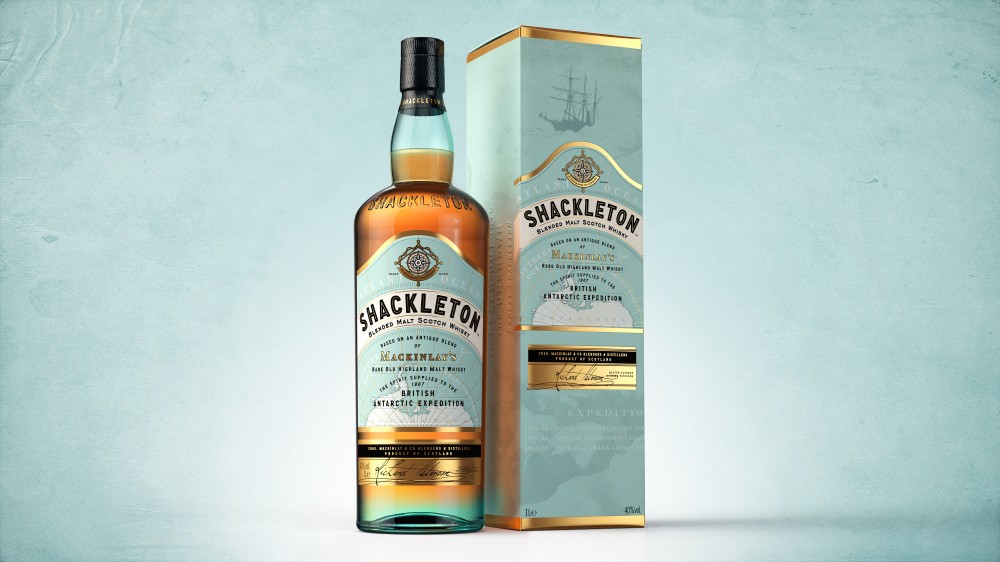 "Shackleton's mission was to save his men from Antarctica, my mission is to save Antarctica from men." The words of Tim Jarvis at last week's London press launch for the new Shackleton Blended Malt, arranged by the Mackinlay's brand owners, Whyte & Mackay.

It's not unusual at this type of event for the organisers to wheel out a speaker with a tenuous link to the product but full credit has to go to Whyte & Mackay for putting together an enthralling launch which was also attended by Shackleton's granddaughter Alexandra.

We were treated to an inspiring talk by Tim, a notable environmental scientist, campaigner and gentleman explorer. Tim had recreated Ernest Shackleton’s heroic rescue journey from Elephant Island to South Georgia Island using the same equipment, clothing and transport that Shackleton had in 1916. His tale of courage in the face of adversity was truly fascinating but what was even more impressive for us was Tim’s reason for doing it.

Tim Jarvis says that he used to give Al Gore style lectures on the environment but found that often people just weren’t listening. What he discovered was that by talking to people about his perilous journeys of exploration he could get their attention and deliver his environmental message by stealth.

Part of his journey retracing Shackleton’s route involved walking across three glaciers – except that a little over a hundred years later Tim could only walk over two – he had to wade through the third glacier because the ice had melted, a stark reminder of the effects of climate change.

We’d like to congratulate Tim on his excellent talk and we’d also like to applaud Whyte & Mackay for supporting his work. It was their sponsorship that made the journey possible. He is now global ambassador for Mackinlay’s and with their support will be taking his message around the world at events like the one we attended.

If you would like to know more about Tim Jarvis and his important work you can visit his website timjarvis.org.

"But what about the whisky?" we hear you ask. The new blended malt is an homage to Ernest Shackleton who famously ordered 25 cases of Mackinlay’s whisky to bring on his journey across Antarctica. A blend of Highland malts with a robust profile, full of fruit, fudge & spice with a good texture and a delicate back note of peat, the whisky will retail at around £40 (approximately 50 USD).

At the preview tasting we were served Shackleton Blended Malt neat and over ice. The ice dulled some of the flavours giving an unbalanced prominence to the peaty notes so our preference was for the neat pour. 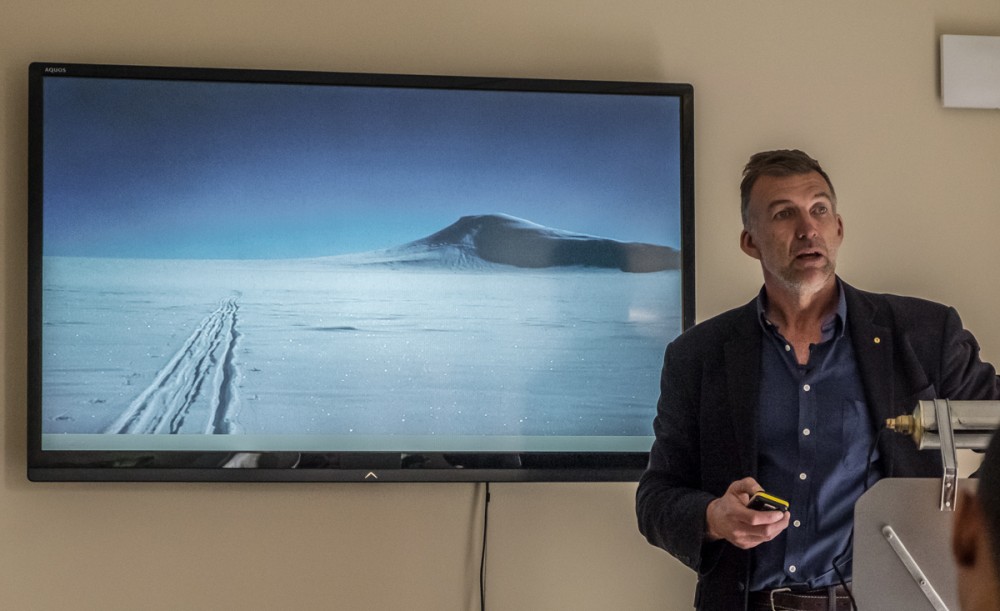 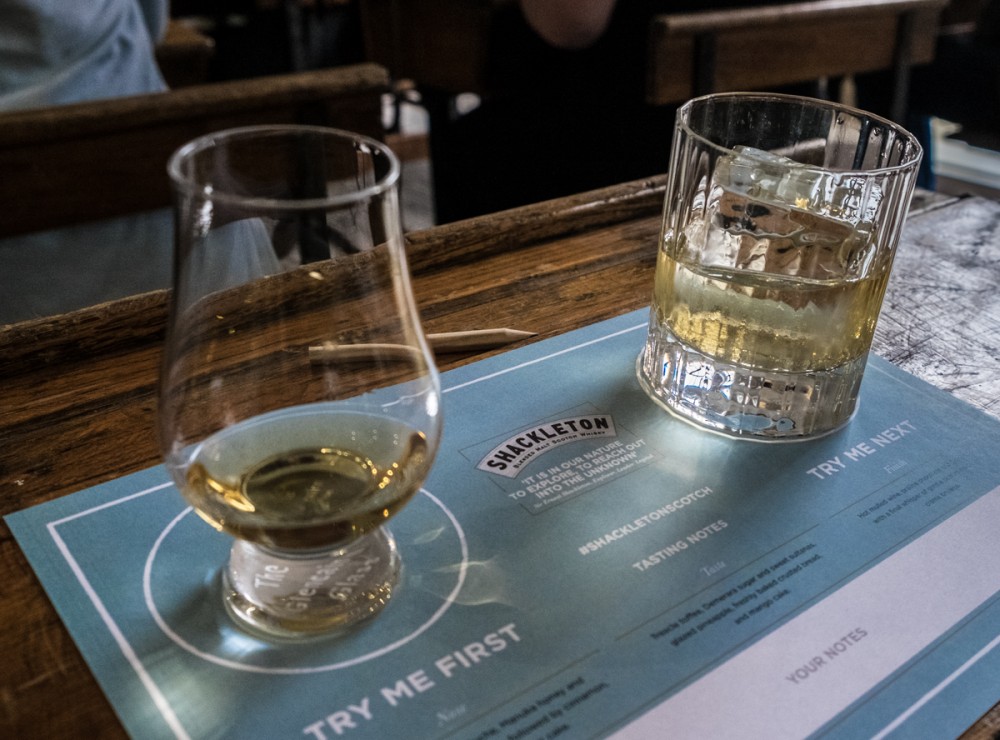 I bought one in Florida last month. I paid 34.95 US. I've yet to open it. I bought it because I followed the news about the find of the whisky. Looking forward to tasting it. I will try it neat and with ice

Is this a different release of the same stuft that was being sold 6 years ago for $ 175? It has the same name, does it not?

I don't think it is the original release. I believe the first release sold out within months. I suspect they set the original price at 175$ because of the hype. The one I have is probably a second release.

@PeterG7, OK, so a different production release of the same vatted whiskies? Apparently so.

Glad I didn't buy the stuff for $ 175. I never understood then, and do not understand now, why anyone would spend $ 175 to buy a bottle of something meant to replicate something which they have never tasted and never will taste, and do not know that they like. Sure, I can intellectually understand how people can pay good money and big money to get close to a romanticized story, but how can anybody seriously think that drinking something which is an approximation by somebody else of something they will never taste actually brings them near to, say, Captain Shackleton?

Now, don't get me wrong, I'd be happy to take an actual taste of the actual original Shackleton's whisky, but nobody is offering me that.

There have been 3 whiskys bearing the Shackleton honorific.

Version 1 - Shackleton's Discovery: The rarest most limited of them all (I'm being a bit sarcastic), was said to be a recreation of the original blend using old and rare stocks of whisky, 47.3%abv it came in a wooden crate and the packaging was made to emulate the original Mackinlays bottle found buried in the arctic hut.

Version 2 - Shackleton's Journey: made to coincide with a 2013 expedition to re-trace the steps for th original expedition, same bottle livery. Said to be same blend as version 1 but "even more refined"...less ornate packaging (straw wrapped bottle cover in cardboard box) also 47.3%

Version 3 - Shackleton blended mslt: Mass market blend @ 40% not said to contain any of the same juice or distilleries as previous two but made in the spirit of Shackleton whatever that means.

I feel like there is a marketing lesson in here

Huh? $175? I suppose this must be the wrong image then cause the (or at least "a") Shackleton that's supposed to replicate the original taste... and looking just like the image here... Is available on amazon UK, and always on sale for basically £20/$28?!

Correction... Ok i read the thread better now. But still, seems to be the same one? Marketing cock up big time?

I agree with you Victor. I'll never sample the original, so I only have someone's word that this whisky tastes the same as the original. I, too, would not pay 175@ based on a chemist reproduction.

@ cricklewood. I must have the #3 you mentioned. I read the information on the box and it's interesting that no where does it say the formula has been replicated. What it does say is " This has inspired our master blender, Richard Paterson to create this Shackleton whisky as a personal and deeply felt project. He has combined the best highland malt whiskies, (no mention of what they are) allowing them to marry over a long period (?) to create an enigmatic blended malt with a dash of body and a whisper of smoke. So, do I have unknown malts put into a cask for an unknown time and bottled with the name of Shackleton? Or, do I have what it states on the bottle label. " Based on an antique blend of Mackinlay's rare old highland malt whisky. The spirit supplied to the 1907 British Antarctic Expedition. My curious mind would like to know

@PeterG7 - I also have the third one sat in the cupboard. I bought it as it was cheap when it was first released and it came with a nifty blue glass tumbler. Reviews all seem a bit 'meh' but I am quite curious to taste it. That said, it's found it's way into the 'perhaps I'll gift these at some point' pile

Frosty? Maybe Shackleton's Blended Malt would be good with ice....

I do run toward unsentimental when it comes to whisk(e)y with the exception of anything relating to its actual taste and smell.

@Victor - My poor attempt at humour via the medium of 'pun' failed then?

And no, I think your lack of sentimentality is to be encouraged - especially in the modern world of whisky.