Average score from 4 reviews and 7 ratings 87 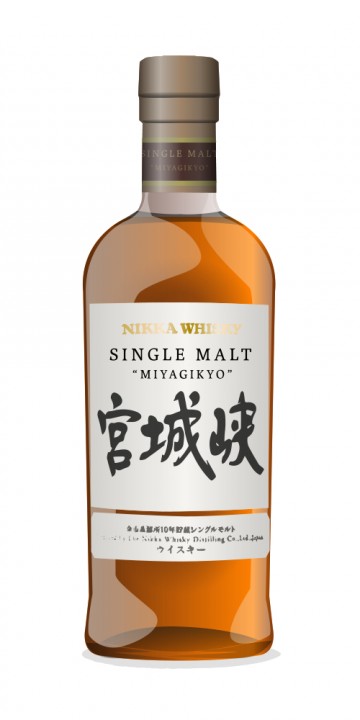 The nose of this 15-year old is fruity and complex. Right from the beginning there are sherry notes and the accompanying hints of rubber, very decent but well recognizable. One layer deeper I got raisins, orange peel, marzipan, some vanilla, as well as cinnamon and a touch of balsamic vinegar. There are also plenty of oaky and spicy flavours in here.

The palate is smooth and a tad spicy. The array of flavours is not as broad as the nose might have made you hope for, however there is still a fair amount of complexity. The raisins and sherry notes are back, together with cinnamon and nutmeg. Also, the wood influence has increased now, resulting in a dry and spicy experience, underpinned by caramel and a nice, full maltiness.

The finish is long, dry, spicy and very warming. It starts off with rather earthy and grassy notes, then cinnamon and chocolate take over, and the whole ends with a touch of smoke.

This is the oldest expression in Miyagikyo’s core range, and I loved it! While the 12-year old might be a better choice as a ‘laid-back’ everyday malt, this one will reward you big time once you get behind the complexity. The nose is fabulous, the palate is well balanced, and then there is a cracker of a finish! This 15-year old is a true showcase for what this distillery is capable of.

If you’re not familiar with Nikka, then you’re missing out. Having tried and loved several whiskies from them, I was very keen to give a Mayagikyou release a go. I don’t know if starting with the 15 yr old was the best choice as an introduction to the range, but it will have to do for now. This review is based on a 100 ml sample, and was watered only slightly.

Nose: Sherry, stewed apples, blood oranges, sultanas, balsamic vinegar, pine, soy sauce, malt, ginseng, pumpkin, and some heavy spices, such as chili, paprika, and allspice. Later I get aloe and spearmint. It’s not the most approachable nose, with bitter citrus, drying oak, and potent spices. However it is complex, and it opens up and becomes smoother and more inviting with time.

This is my first Miyagikyou, and it’s apparently one of their more difficult ones. There’s a coarseness to this dram that initially gave me pause. However time, water, and patience pay off with this one. It boasts some sharp, pointed flavours that are usually much rounder and easier in other Nikkas that I’ve tried. But that edginess does become endearing, and the flavours here are big, bold and complex. This is one of the ballsiest Nikkas I’ve had, which is fun. Recommended.

Congratulations on another exquisite review, @hunggar. I have just finished a bottle of this and can confirm many of your tasting notes. Once you get behind the complexity you get amply rewarded. In my opinion this one is a showcase for what the distillery is capable of. While I am writing this I am sipping a dram of the 12-year old that is much more smooth and balanced in comparison, but rather without edges. If you're in for a complex but rewarding ride, this is your dram! Many thanks again for a great review.

Thanks @Pierre_W. Yes this was one of the more characterful Nikas that I've had. Unfortunately it was just a sample. I'm considering buying a bottle of this because it strikes me as a whisky that might "evolve" interestingly after having been opened. Definitely one I'd like to explore further.

This particular 15 year old was sampled fresh on the heels of it's magnificent younger brother the 12 and so expectations were high. Add to that the reputation Nikka brings with it and you can imagine the burden on it's young shoulders.

The nose is not bad. It's not magnificent, mind you, but then everything cant be hit out of the park all the time. There is woody brown sugar syrup mixed in with sweet melon followed by a drizzle of balsamic vinegar on nectarines. Quite interesting.

The palate is aggressive and reminded me of pancakes smothered liberally with woody maple syrup, dark chocolate and cinnamon.

The dry finish is spicy and full of cloves.

This is not a bad malt by any standards. It is a touch brash, in my opinion, and I wish it held it's poise like it's 12 year old sibling.

Nose: Very heavy and pronounced, with thick toffee and hot caramelised apples immediately enveloping our senses. Underneath this there's a secondary however no less rich layer of honeyed eucalyptus and malted pinecones. Almost as if a meal in reverse, we move away from the desert-like introduction and move to a more fruit-based flavour palate, with lemon and raisin prominent, before moving on further to make sure we get our dose of healthy vegetables, notably fried courgette, caramelised carrot and raw yellow pepper. There's a refreshing layer of orange squash infused with fresh mint to wash it all down with, which allows us to then note the increasingly present and acutely sherried profile of this whisky, which brings with it a hint of sulphur, blending further into superglue and even plasticine. A slightly spiky twist to what is otherwise a luxurious nose.

Taste: A light to medium bodied swathe of honey, which brings within its meditated current a plentiful offering of spiced apples and oranges, garnished with fresh mint and eucalyptus. The flow is exceptionally smooth, as is to be expected of a typically japanese malt, although it does kick up a hint of dried mud as it passes. Once again the sherry notes seem to increasingly dominate as the the whisky sits on the palate, along with some dark chocolate truffle and macadamia nuts. Perhaps even one of those fancy dark chocolate truffles with sherry inside...

Finish: As the honey river passes over the palate and disappears, it leaves behind a trail of cashew nuts, macadamia nut brittle, and peanuts (unsurprisingly of the honey-roasted variety...). There are toffeed apples and sherry-soaked raisins and apricots to savour, with some prickly grapefruit and lime to add some bite. A subtle bed of oaky spice offers a slightly bitter counter-balance to the otherwise rich and indulgent finish, which manages to escape mostly unharmed from a restrained sulphur undertone.

Balance: Very smooth and very contained. The nose may be heavy and enveloping, yet never rushed. Likewise the palate is calm and measured, and the finish is an exercise in restraint. These are qualities that tend to mark the great Japanese whiskies. Here however the sherry influence is so strong, that it nearly undoes all the fantastic work that the malt itself has done. The beautifully complex and rich flavour profile is infused with some potentially subversive sherry elements, unsurprisingly of course in the shape of a sulphur and even plasticine. However these undertones don't ever spoil the show, and one could argue they even add to it by giving it a sense of intrigue. So I'm going to give it the benefit of the doubt. A very fine after-dinner dram.

My reports from Japan is that the distillery and ALL of its casks were destroyed by the recent Tsunami. Whatever Miyagikyou is on the shelves today is all we'll ever get. Masters of Malt have already marked all Miyagikyou as sold-out since last week (though there are some bottles available from the Whisky Exchange).

@Olivier I've just checked the status of Miyagikyou with a trusted and well-informed source and I'm told that neither the distillery nor all of its casks were destroyed as stated above.

I just wanted to set the record straight.