Average score from 3 reviews and 9 ratings 80 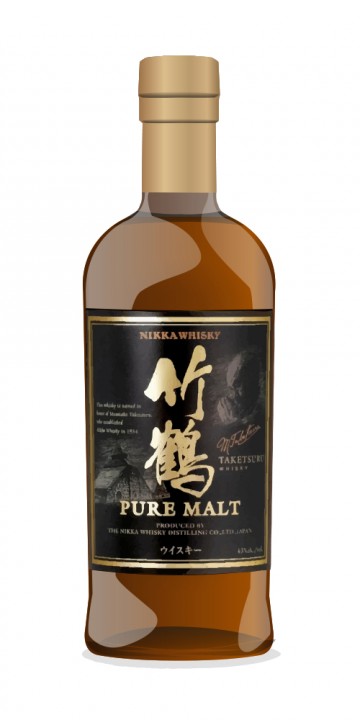 I have already killed a few bottles of the Taketsuru Pure Malt, because it was affordable (last bought in a French supermarket for 35 EUR, but unfortunately in the shop in my own country almost double that) and ideal to make a Mizuwari. A Pure Malt, which means that no grain was added to it. In this case it was composed with malts from Yoichi (10%) and Miyagikyo (90%), both from the Nikka stable. Through my buddy Benny I got a sample from a bottling from 2014, so let me try it again. Floral, light nose on plums and rhubarb, orangettes, caramel, mandarins, pine needles and a hint of oak. Nice (and better than I remember). Unfortunately, it is very watery on the palate, but fortunately it remains sufficiently flavorful to be interesting. Cinnamon, nutmeg and black pepper are the spices of service, which precede some iced tea, orange and plums. Midpalate it even seems to gain weight, if you know what I mean. The finish is medium and quite satisfying. What's in the title, you ask? That's 'oyuwari' or 'mixed with warm water', the counterpart of the summery 'mizuwari' (with cold water and ice cubes). I'm going to try that with this Pure Malt!

The craze for Japanese whisky is still in full swing, some blame Jim Murray's 2014 proclamation that Japanese Whisky was the best in the world as one of the catalysts for this state of affairs, as much as he at times deserves the bashing, we can't blame Sauron for everything.

The reasons are myriad, a burgeoning interest in world whiskys, the rise of whisky as an investment or flippers. I doubt many of these overpriced bottles of Yamazaki Sherry cask or Karuizawa are actually being opened and enjoyed.

Whatever the reason the result is pretty much what one is seeing in Scotland but at an accelerated rate. Expressions losing their age statements but prices remaining the same, ABV's being lowered, Increase of new NAS releases and special releases, an increase in the marketing of grain whiskys.

With the added factor that anything Japanese that can vaguely be passed under the whisky category is instantly pushed onto the market, rice whisky & aged sochu and such, I'm not against these but they are often shamelessly marketed with little regards to their quality.

I know it sounds like a lot of nagging or nit-picking but sadly it's just the facts.

On to today's whisky I've had occasion to try this a few times and it scored very well with club members the first time around. It is a house blend of the different types of malt whiskies that are produced at both Yoichi and Miyagikyo distilleries...maybe.

Nose: Tinned fruits in syrup, there is a rounded malty side, coffee cake soaked in a sherry syrup. There is a dark note like charcoal and umeboshi, buckwheat honey, it's got a oxidized/sulfury side a hint of a sherry influence.

Palate: Pickled ginger on arrival, sweet and creamy malt and in the background earthy peat (not at all Islay like). A bit of heat despite the low strength, complex sweetness like honey then mineral and slightly waxy, there is some tannic oak, something like sandalwood and again that feeling of tinned fruits from the nose.

The main tastes fade quickly from the tongue but there is a creamy sweetness that remains on the finish.

While the combination of flavors is somewhat singular it doesn't dive deeply enough into those slightly exotic notes (rare woods and that weird pickled plum dark note) to make a lasting impression.

None of that sounds like mere nagging or nit-picking to me!

@Nozinan, It's the Montrealer in us

Taketsuru is a blended malt composed of both Yoichi and Myagikyo malts and named after the founder of the Nikka concern, Masetaka Taketsuru. Their standard bottling used to be a 12 Year Old, but the increase in demand for Japanese malts has forced Taketsuru to drop the age statement. The nose is sweet and floral and rather light. I get some plums and rhubarb, but also some vanilla and a hint of coffee grounds. After a breather it becomes sweeter on caramel with some vanilla. I also smell a bit of wood. On the palate it is really very light, but also a bit playful, allowing the fruit to emerge. Very sweet, it has to be said. Ice tea on steroids with some cinnamon and nutmeg. Some nuts. But all in all quite bantam, if you know what I mean. The finish is very short and sweet. Blink and you will miss it. Devoid of complexity, but very quaffable.