During my annual whisky pilgrimage (whoops - visit to the in-laws) in Calgary I let a couple get away:

At that moment I also gave up a bottle I had already purchased (Canadian Rockies 21) - While the price was great, I realized things were going out of control. I have a bottle a home (Thanks @nosebleed) and if I do need another the non-sale price is only $20 more in Alberta).

Amrut Naarangi for ~$140. Yes I want another to back up my unopened bottle, and I may regret this one in the future, but I suspect there will be other special Amruts in my future.

I've given up all hope of meeting my resolution for this year... but unlike recent governments I haven't turned the realization I wasn't going to make it into a reason to start buying without control.

I did pick up a few key additions to my cabinet on the trip, but not as many as I thought. I bought quite a few bottles but mostly for others.

I did not buy EH Taylor Single Barrel bourbon, nor did I buy the EH Taylor Straight Rye. As per usual, I went oh-fer in a LCBO allocation lottery. Not a huge deal, as I have almost no room left at home, and I didn’t really have my heart set on either bottle. Perhaps I’ll fare better in the BTAC lottery later this month, but I’d be shocked if I did. I’d love to snag a WIlliam Larue Weller, a George T Stagg, and/or a Thomas Handy

@OdysseusUnbound You're not the only one who struck out...

@Nozinan Yup 0-2, although I had a couple Rye's bunkered from good old Alberta.

A 1970s or early 80s bottling of JW Black Label for £60! It was a great price but I really couldn't justify paying it right now. Anyway, I'd been mulling it over but just looked and MoM had sold out.

Shame as I do want to get an older bottling of JWB and that was a great deal.

@RianC Too bad. It was different stuff back then, much better than the current version.

I was reading an email this morning about the 2019 Campbeltown Malts Festival. Man they've got some great tasting opportunities. This would be amazing. If only....... Anyone been or even going this year? Definitely on my bucket list. insidethecask.cadenhead.scot/t/ViewEmail/…

@Hewie I did indeed attend Campbelltown malts festival last year. My first time there and definitely won’t be the last but can’t make it this year (the Whiskybase Gathering in Rotterdam in November takes precedent this year). For my money Campbeltown is a better experience than the more celebrated Feis Islay. It certainly helped that the weather was unseasonably hot and sunny but the vibe was really relaxed and friendly and the quality of tastings, tours, masterclasses etc was the best I’ve seen at any festival. Highly recommended.

I won't be able to make it any time soon but it does look amazing!

@dougwatts sounds like a fantastic experience. Looking at some of the masterclasses and warehouse events I think that getting there would only be half the cost. Doing a few of those will soon start to add up. Good to see the spirit of Campbeltown on show

I did NOT buy a Glenfarclas 15 because my “Alberta Connection” hit a few snafus. He assured me he’ll be able to hook me up in July...

@OdysseusUnbound I would say that the moral of your story is to never take Glenfarclas 15 yo for granted. I don't.

@OdysseusUnbound Just order it online at Zyn and have it picked up by your friend. If he is in Calgary I guess. Or wait until it gets on the LCBO shelves for $100 all in. I seem to remember you are not a fan of sulfured Scotch, The 15 is notorious for sulfur notes, just saying.

@Astroke I wonder if the 15 is hit and miss for sulphur.... @Victor is even more sensitive to sulphur than I am and he seems to like Glenfarclas 15...

@OdysseusUnbound No doubt, hit and miss. Reading some of the reviews on whiskybase, there are more than a few references to sulfur and many with none. I know friends who have complained about it. For me the 15 is the best of the bunch of 12, 17 and 21 (the ones I have tried) Sulfur does not bother me and it usually just goes away after a couple months. The last 15 I had was sulfur free, I think :)

8 months ago 3Who liked this?

@Astroke I’m not super sensitive to a modest note of sulphur. The last 3 bottles of GF 15 I’ve had have been sulphur free. But I had a 12 recently that was quite sulphury.

I did not buy the newest release of Virgin Bourbon. I have to say my heart was saddened to see this on the shelf . . . all alone like this. Sadly, they have taken away the 7 year old age statement. And the price has gone up from $12.95 to $15.99. A sad day. 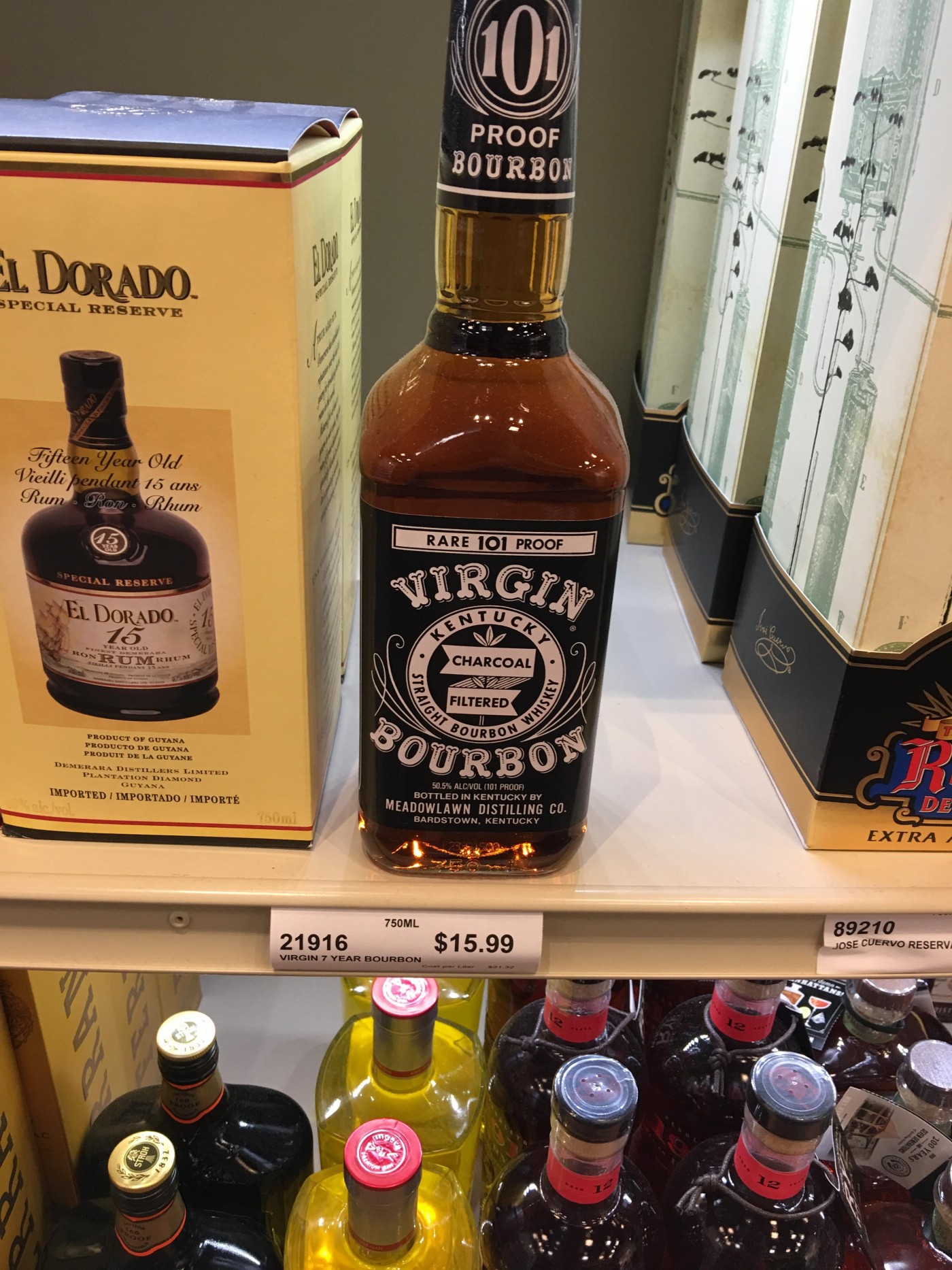 Thankfully I have this in reserve. Keep in mind I just bought all of these in June of this year. So the label change (and loss of an age statement) has only happened within a few months. The last time I bought 6 bottles I went through them way too fast. I now know that I need to pace myself. Thank goodness we still have Old Grand Dad 114 on the shelves. Instead of only reaching for the Virgin 7yo I can change it up with the OGD 114. They will likely never sell Virgin Bourbon with an age statement again. 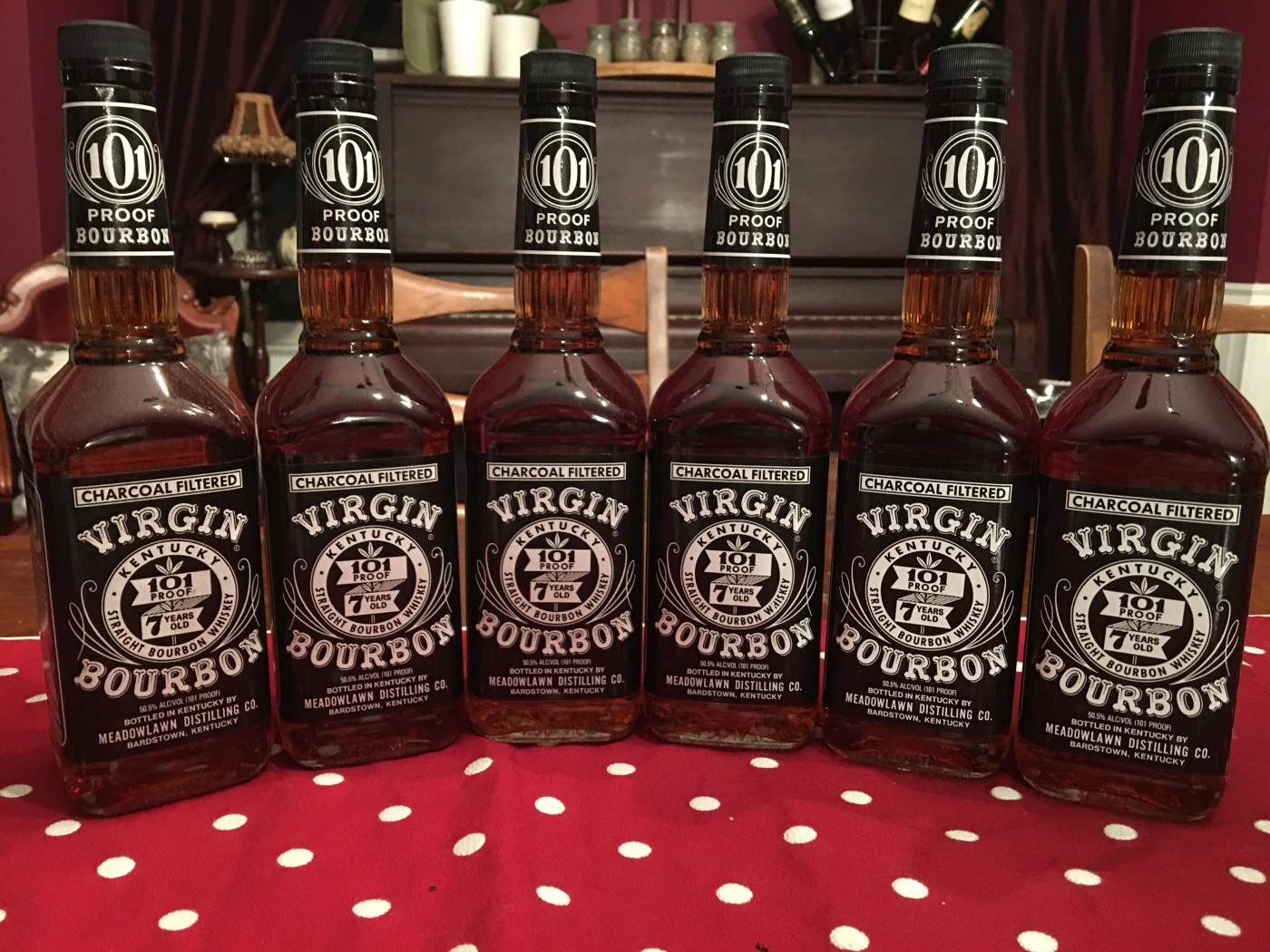 Weller Antique 107. This is one of my favourite bourbons so far in my journey. But I’m glad I have 6 bottles bunkered, since it’s increased in price from $36 to $65. I’m not buying it at that price....but the increase is worrisome. I wonder if I should stock up on Rare Breed before it goes up to $100 from the current price of $60....

@OdysseusUnbound I need to try this rare breed...

@OdysseusUnbound as mentioned before I’m squarely in the Weller 12 camp but that’s getting impossible to find.

@OdysseusUnbound talk of the possible debasement of Wild Turkey Rare Breed is unnerving to me. We got the 25% local price increase on it 18 months ago just as I predicted. It was way too under-priced at that point relative to its quality and its competitors for quality. It is still under-priced in the US. I wouldn't be at all surprised to see another price increase, assuming they keep the product as it is and do not debase it in any way. In my area $ 45 incl tax is still outstanding value for money on Rare Breed. Despite the gazillions of bottles of whiskey hanging around my house which I may never get around to drinking this still makes me want to go out and buy a bottle of Rare Breed.

Put another way, if someone asked me what the best buys in bourbon are right now, the first two products which I would name would be Elijah Craig 12 yo Barrel Proof and Wild Turkey Rare Breed.

@Victor I agree. I have literally no room in my whisky cabinet/laundry room/house, but since Rare Breed is currently sitting at $60/bottle, I'm tempted to purchase two of them, just to be safe. I don't currently have any in the house. At $60/bottle it's THE best bourbon value in Ontario bar none. Even taking price out of the equation, RB is in my current "Top 3" favourite bourbons.

@casualtorture My bottle has been open for about 18 months, and I'm still waiting for my bottle of Weller 12 to stop being awful on the finish. It's really a shame, since the nose, texture and initial flavours of it are delectable, but during the last part of the flavour development into the finish things go downhill. The stale, aggressive, expired cough syrup note just takes over and dominates. This bottle is still about 3/4 full and I really hope it's drinkable in time.

@Nozinan I will likely purchase a bottle sooner rather than later. I'll get you a sample.

@OdysseusUnbound carpe diem. I still think about that one time in September 2011 when my sister and I left an $ 85 bottle of William Larue Weller on a liquor store shelf on Hilton Head Island, South Carolina, while on vacation. WHY did I do that? Because I assumed that I would be able to buy it again in the future at that price. Of course, we did clean out the remaining 2 bottles of William Larue Weller and 3 bottles of George T. Stagg. That was the first and last time I ever saw George T. Stagg sitting on a liquor store shelf. It seemed like a hallucination seeing those 6 bottles just sitting up there on that shelf waiting for someone to buy them.

@Victor at least you left with some. This is a picture from a day in November of 2010 when I didn't buy anything on the shelf. I was looking for George T. Stagg only at the time. Ya . . . that is the 2010 line up. There were three bottles of each on the shelf . . . I left empty handed. Fool that I am!!! 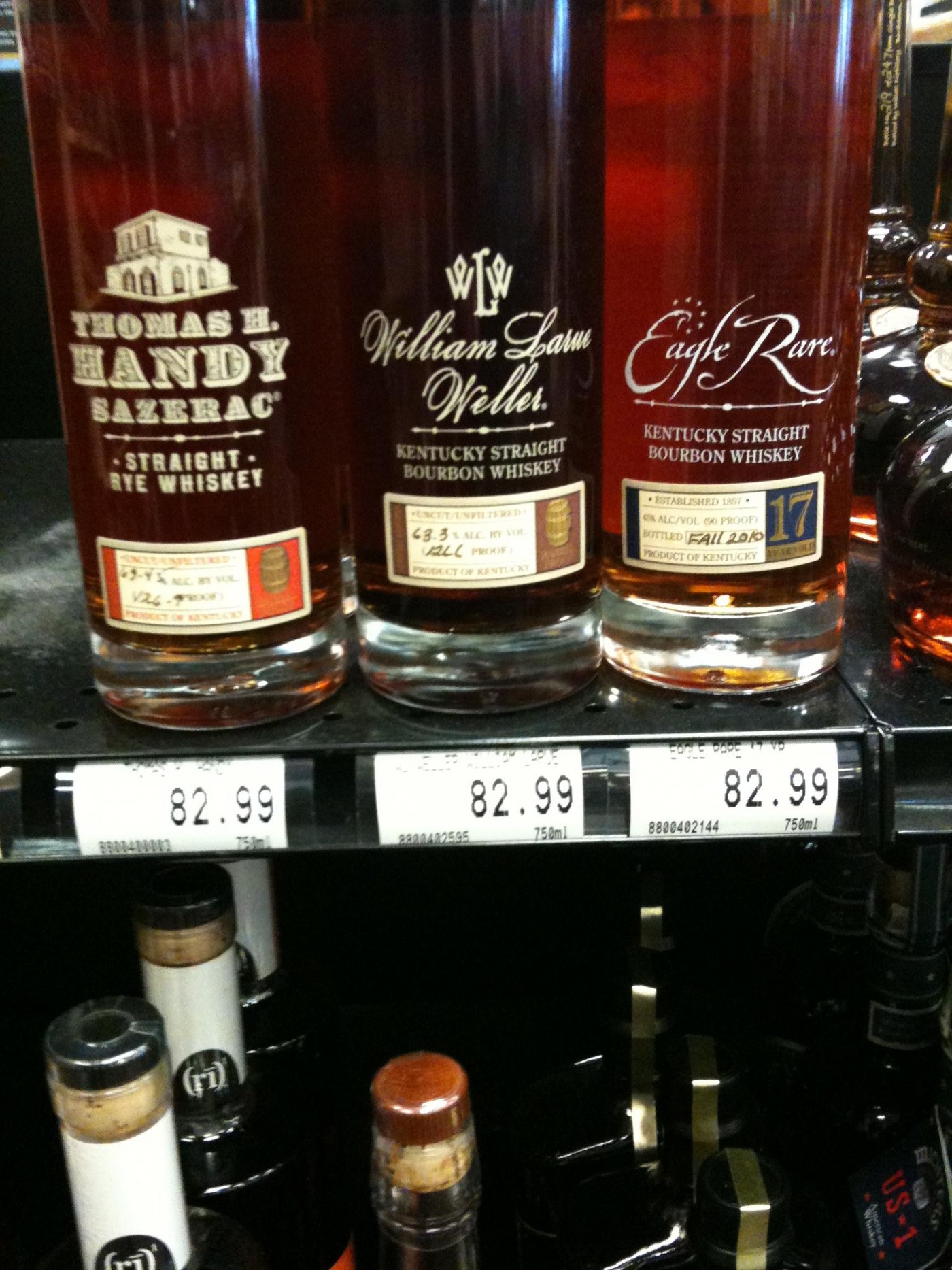 @Nock So sad. Hopefully you did not walk out with what appears to be Willett Pot Still SiB's or the lower shelf Pritchards instead :)