It is that time of the month . . . recycling. So, I decided to ditch a few bottles from my cabinet. That does give me room to open a few more bottles in the coming months. Let me be clear: these bottles are not killed off so much as “rebottled” into an infinite number of smaller bottles between 200mL and 15mL. But it is sad to see some of these “mostly go.” I will only pull them out again for a tasting and not for casual drinking.

The Stagg Jr. is batch #11 and not one of my favorite batches. I found it thinner compared with older releases. I am one of the few who loved the early releases. This batch was turning bitter of late. I find this happens with bourbons getting too much air.

The Springbank 10yo. This bottle was batch 01/08/17 17/328 and I opened it on July 21st 2018. Mostly uneventful. That first year I scored it three times all around 84 points. But then after almost a year of being open (and below the half-way mark) it took a huge turn. I started to score it a regular 90 or 91 points. In the last two months it was excellent. I wish I had another bottle.

Ardbeg Uigeadail batch 27/02/2019 – this is a really good batch. I have scored it in the low 90’s a few times now. It is not sherry dominant, but it is very good. Another good is batch 11/04/2019 if you see either around. Neither are in the upper echelon of Uigeadail batches . . . but then I haven’t encountered one of those since 2013 . . . and I have been diligently looking. Still, a great peated whisky that gives you the peaty blast with wonderful sherried red fruit integration.

The Balvenie 14yo Peat Week 2003. Really good, but not amazing. Several times I composed some blind tasting with this and a few other batches of Ardbeg 10yo thrown in. Truthfully, at least twice I thought this was one of the Ardbeg TEN batches. This is the only other peated whisky I have ever confused with an Ardbeg. One time I wrote down, “This is a fantastic batch of Ardbeg TEN and I must find and buy several more bottles.” However, that was when I thought it only cost $49.99. When I realized it was $99.99 I elected to not purchase more. So it is a great whisky, but a good bottle of Ardbeg TEN is just as good.

6 months ago 9Who liked this? 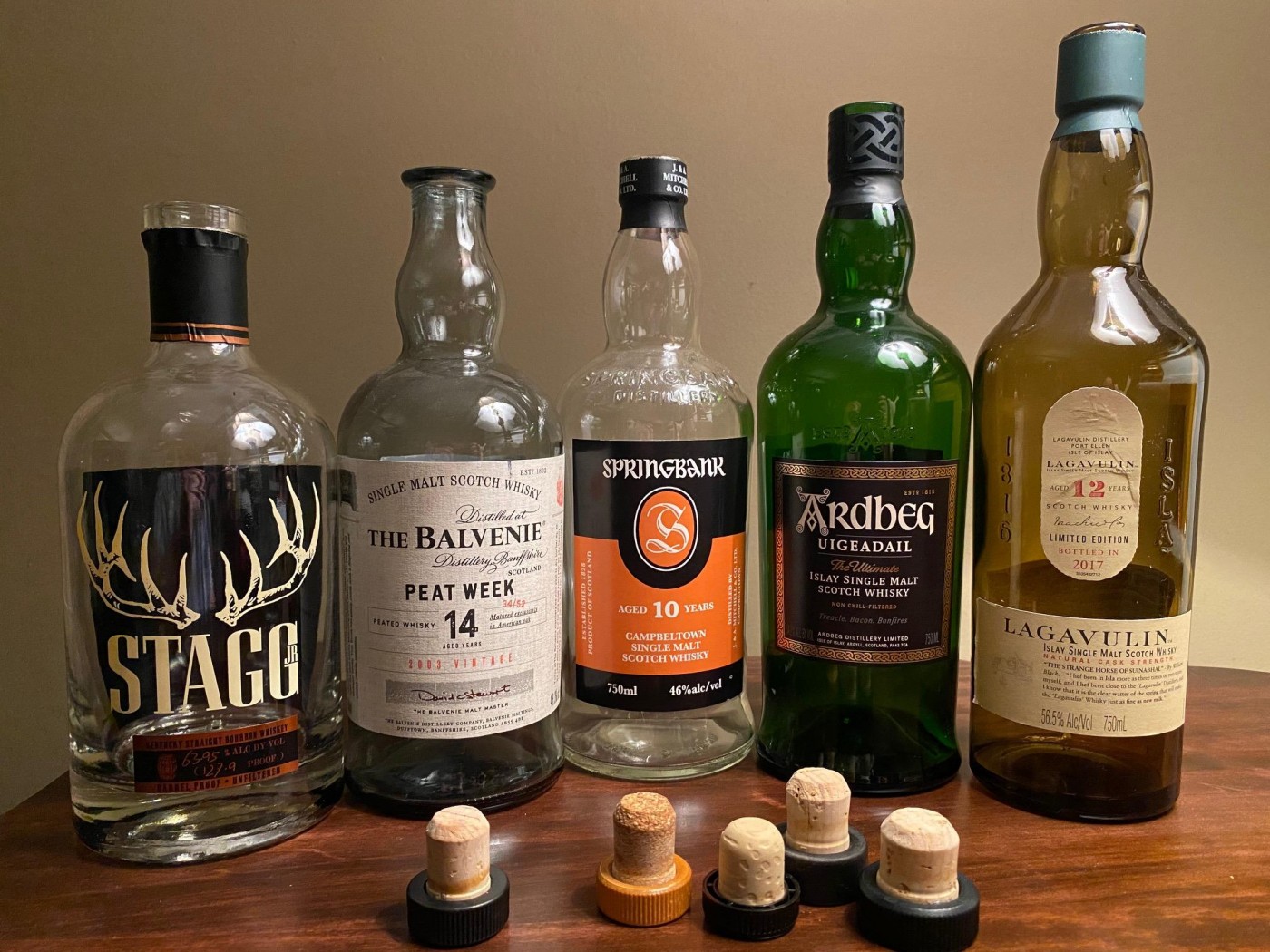 I’m having an Old Fashioned with the last bit of my Woodford Reserve Rye. This bottle was pleasant enough, but I doubt I’ll replace it. Tasted blind, I’m not sure I would have pegged it for a rye. It tastes more like a high rye bourbon to me. Good, not great. Review forthcoming...

I’m finishing the last of my Blanton’s Original. I was going to write up a review, but this one is pretty darned close to the last one I reviewed. Pretty good, but not great. Wild Turkey Rare Breed is better for the money, but Blanton’s is unique enough that I’d probably buy it again at $65.

@Victor Given that Blanton’s is a single barrel, and that it’s from the same mashbill as ETL, I’d say that batch and barrel variation is evident. My bottle of ETL is way different from my two bottles of Blanton’s.

@OdysseusUnbound oh, yeah, it's ALL barrel selection. Elmer T. Lee used to select the barrels himself for his bourbon, ones he called "the honey barrels". Gives you some idea what he was looking for

@Victor, @OdysseusUnbound, not only did Elmer pick the honey barrels, he was known to drink this eponym with Sprite...yep.

Just finishing the last of my Pike Creek 10. This bottle evaporated really quickly. This one seems particularly prone to wide batch variations, as some reviewers hate it and some rave about it. My review is forthcoming but, spoiler alert, this batch/bottle was really good.

I listened to some great music from the ‘70s today while crossing items off my to-do list.

When I was done, I poured the last of this Fort Creek Heart of Gold and cranked up Neil Young’s Heart of Gold from 1972. This bottle is from Lot 1972

A beautiful whisky, creamy, spicy, full of flavour. It is no surprise, the bottom of this bottle is incredibly delicious as are most of the last pours from Forty Creek reserve releases. 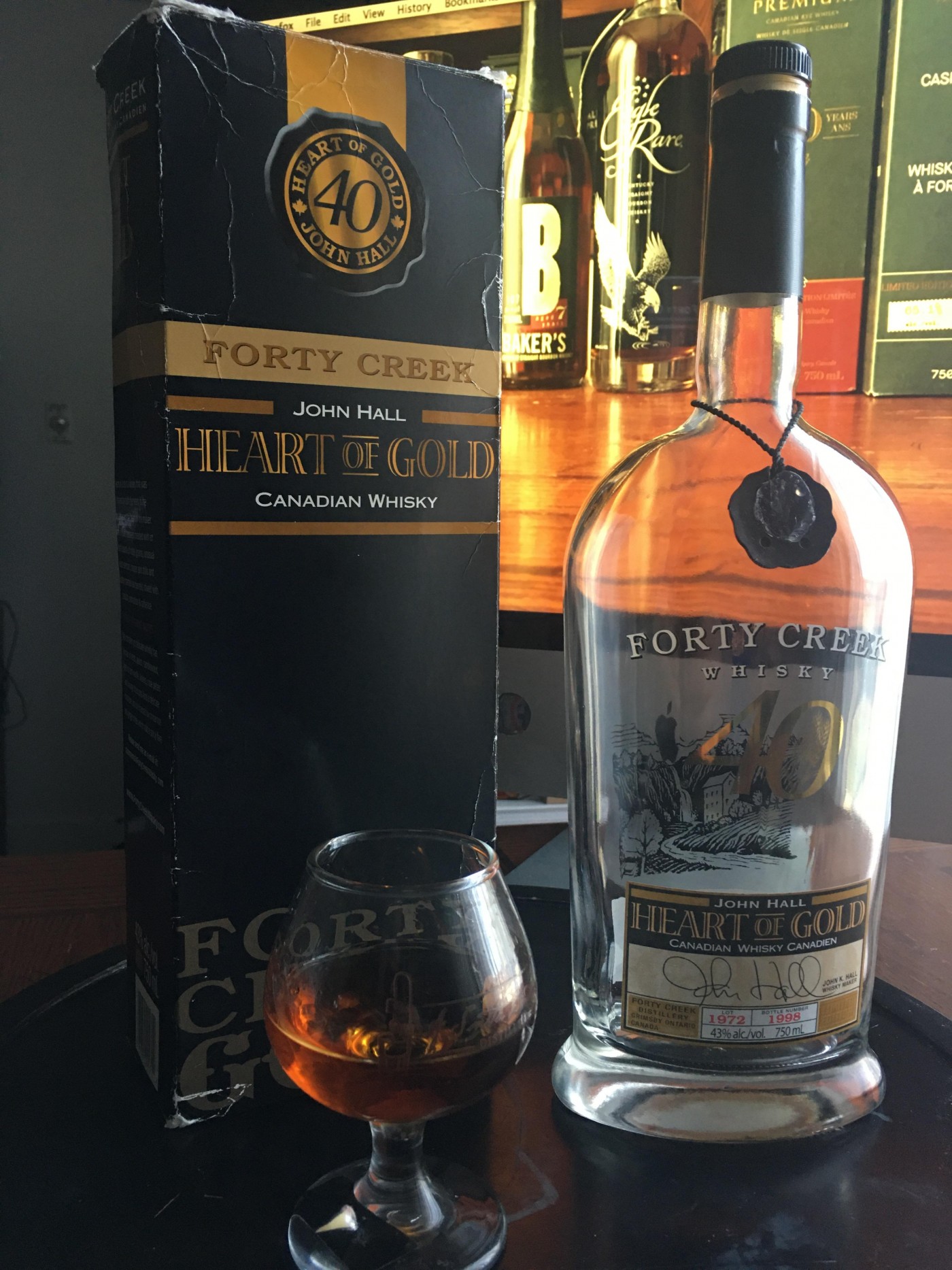 @paddockjudge Thanks for drinking that for me.... being on call has its drawbacks. HoG is probably my favourite of the special releases.

@Nozinan, you are welcome, it was my pleasure, truly it was. I hope you can enjoy one soon.

@paddockjudge Thanks for reminding me to pull out my old Neil Young albums. Definitely time they had a spin. 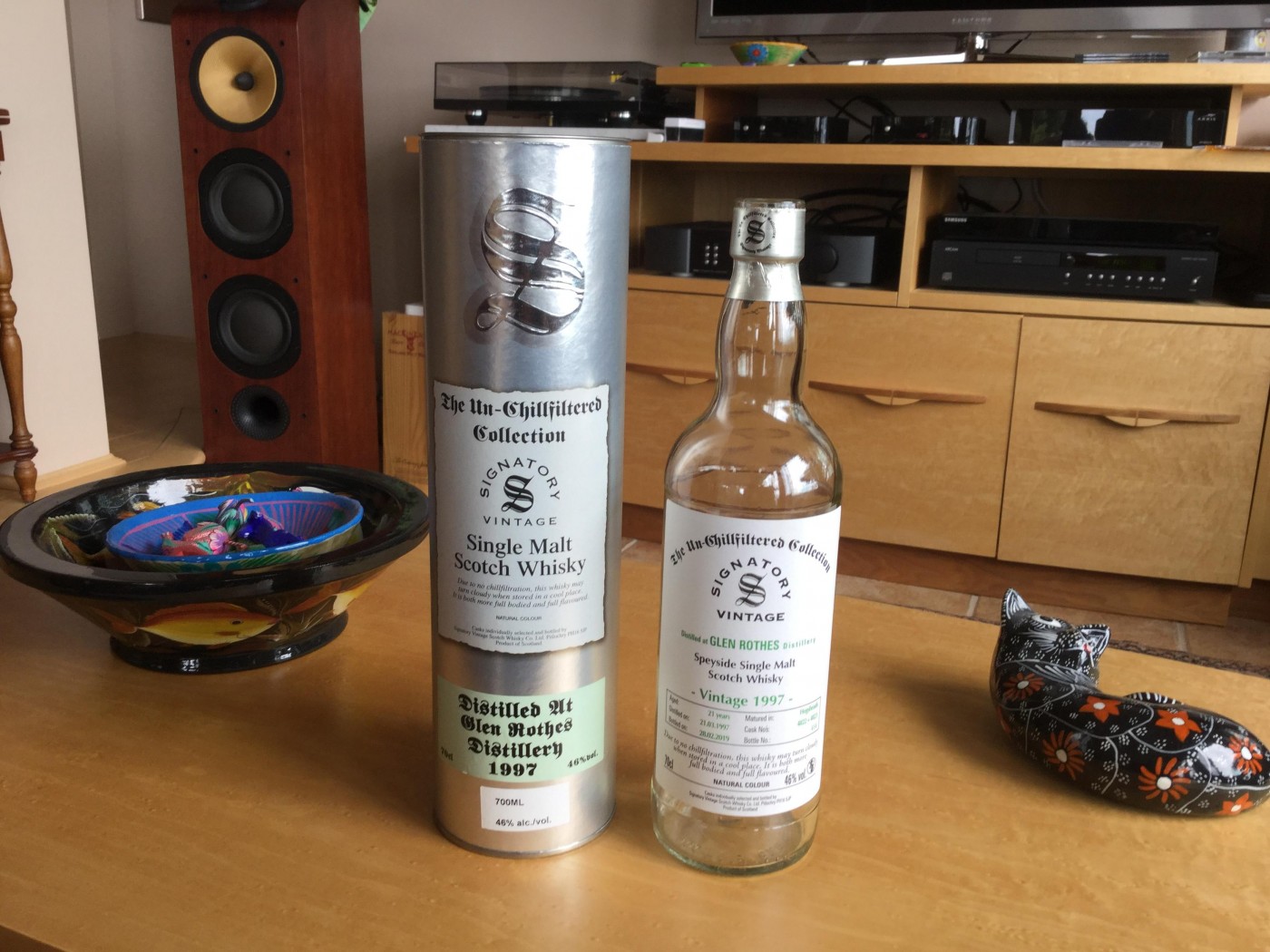 Finishing up the administrative side of work today, I put something into my phone and blessed autocorrect interpreted it as LAIMRIG. I saw that as a sign.

I poured my last decanted 10 cc of this elixir into a mini glencairn. A few drops of water and there we go.

Who knows... if charting goes on a long time, maybe I'll pour some of the last few drops of my original Laimrig...

Had the last dram of this tonight. I didn’t like it much at first (about a year and a half ago) then I liked it for a while a few months ago, then I didn’t like it again about a month ago, now I kind of liked it ok again, but I definitely would not buy it again. 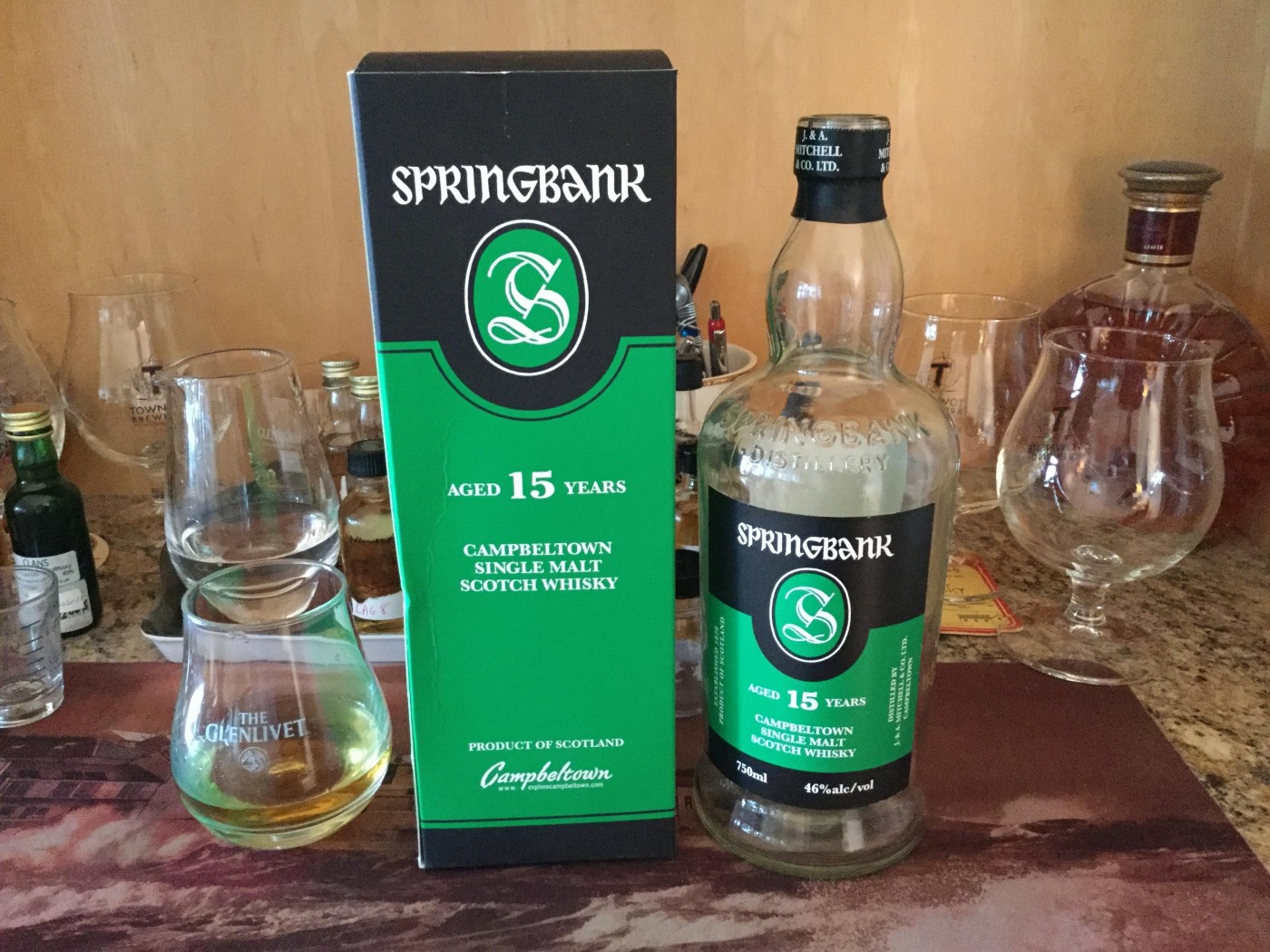 Went to a friend's house on Saturday and polished off my bottle of The Balvenie Peat Week 14 year old, 2002 Vintage. It comes in at 48.3% ABV and I really enjoyed this bottle.

Over the weekend, I memorably enjoyed the last dram of my Kilkerran WIP #4 while sitting up late with my stepson and his buddy (both 13) at the bar in our new house, discussing middle school drama, Ireland, The Lord of the Rings, and who knows what all else.

I gave the boys free rein to make as many kiddie cocktails as they wanted—it was just such a great time chatting.

Not exactly finished, yet, but I will be visiting family in a weeks time and have selected a few bottles that I will take, and most likely leave, there. The carrot being I will make room to crack some new ones open ...

They are: Talisker 10 - about a sixth left but it's started going flat, to my nose anyway. Benromach 10 - best part of a full bottle but I'm just not feeling it as much as others I've had and I'm sure my Mum will like it. Springbank 15 - about half left and I may return with this but if my Mum, or anyone else, really digs it I'll not feel too bad about it staying up there.

I just finished my bottle of Pusser’s original British Navy Rum. This bottle was much better than I expected. I’m 100% certain that I will replace it. Lots of brown sugar, cloves, vanilla, raisins, a bit of tobacco. I liked it better than many whiskies I’ve tried. Not necessarily super complex, but all the flavours work together beautifully.

@OdysseusUnbound I had a friend, who went and died on me a few years ago, who was an ex Royal Canadian Navy vet. His rum of choice was Pusser’s. I always likes those decanters it came in so his wife gave me his last bottle which remains unopened. I should probably get a few of his other friends together and knock it off in his memory.

@BlueNote It would be a fitting tribute to a departed friend. It's dangerously easy stuff to drink....which leads me to do my (awful) Johnny Depp/Captain Jack Sparrow impersonation: "Why is the rum always gone?" much to my wife's annoyance.

@OdysseusUnbound - That's the 40% version? Glad to hear you liked it. Definitely my favourite style of rum (so far) and, I'll leave it till next year now, but can't wait to open the 50th anniversary bottling.

@RianC It’s 42% abv here in Canada, but yes, it’s the “lower proof” version for sure. I’d love to get the gunpowder edition or the 15 year old, but I continue to be impressed by rum’s value here in Ontario. Pusser’s cost me $40 which is cheaper than any single malt and I enjoyed it more than quite a few (much pricier) single malts I’ve tried.

@OdysseusUnbound Wives are so easily annoyed, aren’t they?

@BlueNote Exactly. Why does mine ask “don’t you have enough whisky?” every time I buy a new bottle or four? The answer is always the same: what constitutes “enough”? Enough for what or for whom? Sheesh...

@OdysseusUnbound At least, unless I underestimate your collection, you will likely consume or share all of it. In my case my wife would not be wrong if she suddenly said “no more...you have enough”.

@Nozinan @OdysseusUnbound Do we need a support group. Oh, maybe this (connosr) is it.

PS, I love my wife, but they just don't understand the collector gene...except when it comes to shoes.

Just finished up the last of the Springbank 10 with the old label and packaging. Got one of the new yellow label ones waiting in the wings. 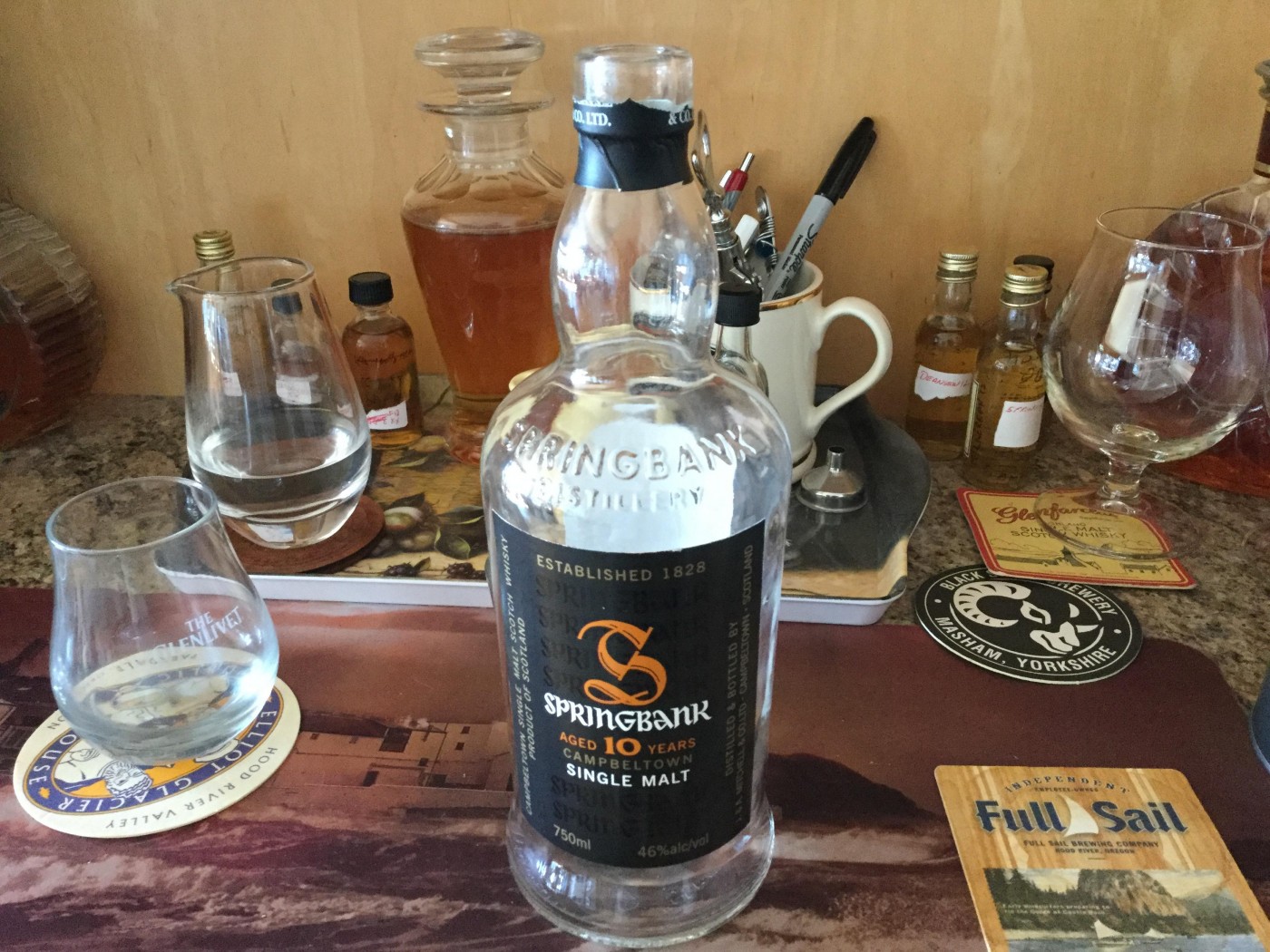 Actually, it's an orange label on the newer Springbank 10; I just looked.

McClelland's Islay Single Malt, 40% ABV, reputed to be 5 yo Bowmore. It has taken me about 9.4 years to finish off this 1.75 Litre bottle. Without Norlan glasses it would likely have taken me another couple of years. To celebrate I have taken a sip of my 95% full 9 years old bottle of Bowmore Legend, 40% ABV, reputed to be 8 years old. Legend is a bit easier to like, and is more tolerable out of a non-Norlan glass, e.g. Glencairn.