Average score from 4 reviews and 4 ratings 91 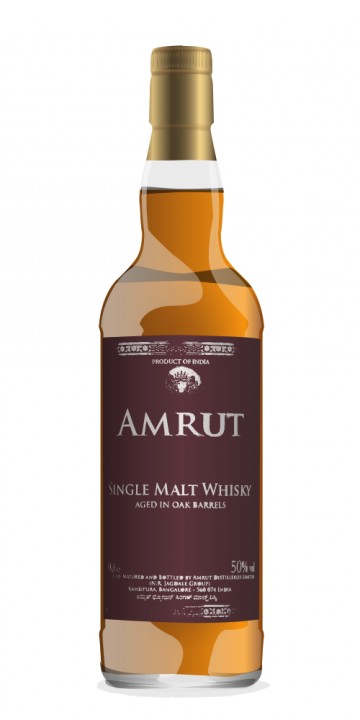 On October 10, 2013, the following review on All Things Whisky rocked the whisky world:

This was a review of, at the time, the rarest Amrut whisky ever released. At 144 bottles it immediately became unobtainium, but like most of Curt’s reviews, I tasted this vicariously through his words.

What followed was one of the most unexpected storms of controversy I had read up until then. People debating whether it should hav been released if “no one will be able to taste it” and so on. One irritated Ontario resident had the gall to write:

“At Disney World, all you have to do is ask to get something, but I don’t think it works with single malts. Let’s try: Ashok, if you’re reading this, I’m in Toronto and I’d like to taste it too. Can I have a sample?”

To my amazement, he replied that if I came to the 2014 Spirit of Toronto, he would try to have a sample for me.

I made sure I was at SOT, my first year there (apparently I missed out on a Port Ellen at the Islay bar), and I was at his Amrut masterclass where I tasted some expressions that cemented the distillery as one of my favourites, if not my favourite. And he was entertaining as “heck”, using language I would never have expected from a brand ambassador. He taught us to cradle the glass and cover it, what I have since termed the “Ashok Manoeuvre”, warming the spirit to release new levels of greatness.

At the end of the masterclass, I lagged behind and introduced myself and he gave me a bottle labelled GA. I tasted it a couple of months later with @nosebleed (July 26, 2014, if I am correct), and have poured it for 2 other friends since. I may have sipped from their glass but here, 5 years later, is the second pour I have taken for myself.

This expression, tasted in a Highland Whisky glass, is reviewed in my usual manner, allowing it to settle after which I take my nosing and tasting notes, followed by the addition of a few drops of water, waiting, then nosing and tasting. The Ashok manoeuvre was employed to bring out all possible flavours.

Fruity. Sweet syrup. Some baking spices. Sweet apple. Ripe pineapple. Ashok manoeuvre brings out an explosion of fruit. A hint of something savoury in the background. There are things I smell that I just can’t put into words. Water seems to mute the fruitiness of the nose a bit, bringing out some savoury notes. (21/25)

Hot and spirity on first sip. Sweet. Fruity. Tropical fruit punch. Spicy warmth in the development. Some pepper. Effervescent (what @paddockjudge calls “Whisky pop rocks”). The Ashok manoeuvre makes it richer and fruitier. Water makes it hotter and spicier and not as fruity., but the grapefruit pith really stands out in the development. (21.5/25)

Peppery, a hint of grapefruit pith. The tannins sit with you for quite a while. Hint of citrus with water and warming (22.5/25)

Nicely balanced. Nose and palate complement each other. Richer without water and with warmth. (22/25)

Interesting, although I mention mango, my 2014 notes are not too different from these tasting notes. The sample seems to have stood up well over this time. I gave it an 89 then.

This is not the best Amrut I’ve ever had. There are a few expressions I would rate higher. But this is probably the rarest whisky I’ve ever tasted (not the rarest spirit - that goes to the brandy from Masan, Xinjiang Province in China). Thanks again to Ashok Chokalingham for this once in a lifetime opportunity.

It's a known fact that angels in India tend to be a lot greedier than those in Scotland taking away almost 10% - 16% as their share every year. This is fact that wouldn't hurt as much if the spirit in question here was not as top notch as Amrut. Basically what it boiled down to the last time around with the first edition of the Greedy Angels was about 144 bottles of the oldest expression that this distillery had ever come out with. This left a lot of greedy souls like me wanting to taste at least a wee bit of Indian single malt history. Thankfully the good ol chaps at Amrut decided to come out with the second edition of this brilliant expression and fortunately for us our very dear Ashok Chokaligam arranged a dram of this one for us to sample.

Just to put things in perspective firstly there are just about two known Indian single malts and Amrut's one of them, secondly an 8 - 9 year old whisky matured in India is well over 30 years in the casks in Scotland. So getting to sample something like this itself is exciting enough. Now for the actual spirit itself:

Nose: This along with the palate are the two most exciting parts of this expression.. lots of sweet spices, honey and fruits, strong notes of vanilla, also some cardamom, custard apples, green apples and wet woody notes too. As you leave it open for longer you can nose more notes of dry flowers that make their way through. The oak casks used for maturation have given this one all its characteristics in just the right doses.

Palate: As I mentioned the palate was just as strong as the nose with lots of dark chocolate, licorices, aniseed and vanilla come up as soon as the spirit spent some time your mouth. The spices notes exist but just the right amounts have been sprinkled in. However what comes out the best are all those strong tropical fruit notes ...lots of papayas, pineapples and oranges. If you held it in long enough you’d also get some sweet dry figs too. And lastly some more of that wood here as well. I must add for me this was very smooth whisky that just glided all over.

Finish: This one had a finish that was moderately long, once again the casks imparting notes of woodiness and vanilla plus some dark berries and mild hints of mint with citrus too.

Now I definitely see why these angels get so greedy by the time they reach Amrut. Whilst quite different from some of the power packed cask strength expressions that they have come out with in the past this one still qualifies as an absolute beauty. Cheers to the chaps at Bangalore and thank you once again Ashok for letting us having a slice of history.

@Nozinan... Actually, this would be hard to say.. the last Greedy Angels was matured for 8 Years whereas this one was in the casks for two year's more (i.e. 10 Years) .. the last time around it was bottled at 50% ABV and this time around there are two variants at 46% and 71% (for the main bottle and the miniature respectively)... I wonder whether these differences have influenced the overall profile of this expression.. then of course.. it could just be me and the notes that I got.. :)

I wonder if any of the miniatures are available in Canada.. I'd love to do a head to head (Ashok, if you're listening....)

A few months before this much awaited whisky was set to launch Amrut's brand ambassador, and my good friend, Ashok, sent us a sample. He wasn't looking for an opinion - he was just being nice. Letting us take a sneak peek into the oldest (released) Amrut ever.

Greedy Angels is named for the excessive evaporation that the Bangalore weather forces on the maturation process. Word has it that over 274 liters of spirit was lost in this 8 year experiment making this expression possibly the rarest Amrut in the world.

A marriage of two ex-bourbon casks the nose is unmistakably that - bourbon. But there is layer upon layer of complexities forcing you to sit and ooh aah over every new aroma you discover. First the honey, toffee and vanilla. Then a bowl of stewed fruits topped with crushed biscuits, cardamom and the faintest of cinnamon. Let it breathe a bit and it becomes dry almost like a fortified wine taking on some butterscotch and green pears.

The creamy palate makes a lovely transition from the nose with honey, toffee and vanilla as the central characters all ably supported by pleasant star anise and strong jasmine tea.

The long finish is warm oaky and sprinkled with black pepper.

A lovely robust malt which makes you marvel at how the folks over at Amrut rarely put a foot wrong.

A new Amrut single malt is always good news, This Indian distillery has produced some super drams in recent years, all very young relative to Scotch whisky due to the dry and hot climate in Bangalore, which boosts maturation and causes the liquid to evaporate and aged at a super fast pace. What’s new in this one is that it’s their oldest EVER malt to be bottled : and after 8 years of maturation the angels share was so large that only a little remained from two casks enough to make only 142 bottles (274 litres of spirit were lost in both casks). That is insane! isn’t it? One of a kind whisky since I don’t really think Amrut will go on bottling many of those old casks since it’s not economical to loose so much, and also since their younger 3-5 year olds do feel so much older on the ‘Scotch’ scale. Anyways, very brave and generous move on behalf of Amrut here, although the price is somehow expensive. Couldn’t find those online except on the Swedish systembolaget site..