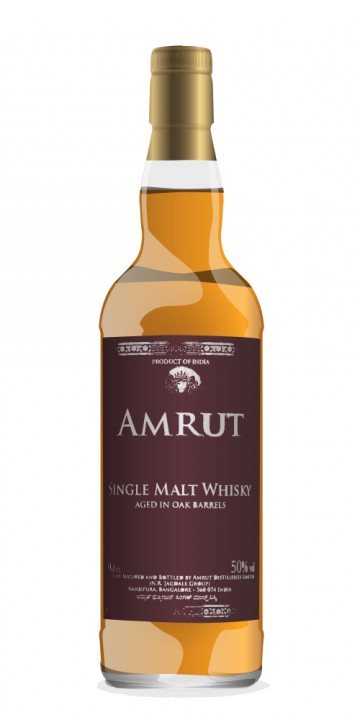 I love movies that keep me guessing, and I have a bro-crush on Hugh Jackman, ergo this review is named for a movie that kept me guessing, since the whisky fooled me the way Jackman's character was fooled by "The Transported Man" in Christopher Nolan's The Prestige. My notes follow my process before I knew what this whisky was.

With water there's some sticky brown sugar on the nose with just a hint of something herbal (mint? rosemary?), the palate is very much chocolate-covered raisins upfront with the pepper and cloves coming into the mix later. The finish is just as long, warming and sweet with water as it is neat. Whatever this is, I'd like to get a bottle of it.

I was shocked to learn there was nary a wine cask in sight when this whisky was matured. This is very rich, very fruity and an absolute pleasure to sip. I have no idea what this type of thing would sell for, but I'd be willing to pay top dollar for it. Absolutely decadent. Thanks to @Nozinan for the generous sample.

I don't remember how much I paid for this. I bought several over several years, and likely they are less abundant than before (unlike the metal tinned batch-based expression, there was only one 2007 edition - They aren't getting more in). But the price was probably between $70-80 plus 5% tax. This has always been a little cheaper than the peated CS in Alberta. You can get a more recent batch for, probably < $100, and it is almost as good.

I purchased an Amrut CS online last year and was sent the regular 46% version. After some negotiating I was able to work out a deal with the online store and actually kept the inexpensive Amrut 46%. That said @Nozinan provided me with a CS sample as well and it was very good. I still prefer the IS and Portonova but the difference is negligible. Very nice review!

In November I opened this bottle of Amrut CS. Not just any CS, but one of the 2007 Special Edition bottles produced before it became a standard offering with batch numbers. After tasting this in a miniature years ago, I picked up as many full size bottles as I could find around Calgary (4 in total). I was sure I had reviewed it.

On March 24 I finally got a chance to sit down to do some reviews. I decided to catch up on my Amruts. To my shock I discovered I had not reviewed this. I resolved to correct that straight away. Also in the line-up were 2 single cask expressions, one a sherry cask LCBO exclusive and the other a peated port-matured bottling that was available in Calgary. Those reviews will follow.

I had thought this was the original batch of cask strength, until @maltactivist reviewed an even earlier bottling.

This bottle was just over half full, and gassed after each use (open 4 months and 2 weeks). This expression was allowed it to settle into a Highland Whisky Glass after which I took my nosing and tasting notes, followed by the addition of a few drops of water, waiting, then nosing and tasting. I did the nosing of all three expressions before the tasting of all three, and then the impressions with water.

Initially hot, with a sour (tropical) development. The second sip brings out vanilla and cinnamon, with apple in the background and some pepper. Water makes this extremely rich, spicy, and fruity, though still a little spirity. (22/25)

The nose promises way more than the palate could ever deliver. In all though, very balanced and flavourful unpeated malt.

Just as I remembered from the miniature I had tried (and thought I had reviewed), this one is just a little more refined than the later versions I’ve tried (I’ve opened 2 later batches). I’m glad I have a few tucked away.

Expressions like this one are what keep Amrut high in my esteem.

This review is of a 50 ml mini bottle of the unpeated Amrut Cask Strength, bottled in September 2007. I give my thanks to @Nozinan for the reviewed bottle

Nose: very strong barley grain flavours, more cereal in style than grassy; there is some muted pear and citrus in the mix. For a whisky which is aged a relatively "few" years, 5 ?, 6 ?, you can tell that there is something a bit different here,...the use of some new oak for aging. This is pretty simple, but I love the intensity. The barley grain commands the flavours here

Taste: great barley intensity; stays simple. The barley flavours in this one are mostly middle and low-pitched. This is not the tastiest barley, but it is good quality barley. If you like flavour, you will like probably like this. This gains sourness mid-palate

Finish: moves very slowly more sour into the finish, but stays pretty close to the palate for a long time

Balance: love, love, love! the intensity. This is all about barley. This is good but not the very best-tasting barley. Even though some new wood aging is done here, the wood flavours are mostly in the background. As a Big Flavours Guy, I can always get into a whisky like (unpeated) Amrut Cask Strength. I will choose other Amruts for my bottle purchases, however

Water added: 1) raised the pitch, sweetened, and lessened, the nose flavours, 2) fused the palate flavours, and 3) fused the flavours on the finish. I prefer this without water

I haven't tried this since December 2013 when I discovered the minis in Calgary. I have a few regular bottles and a couple of minis left. I hate to open them and destroy history...I also had a subsequent batch which I did open. My brother In law found another and will bring it.

I really like this whisky. I'm very happy to hear that this is a barley forward malt. It gives me a good reference point to what it is I'm tasting. So now I can with confidence say I like the taste of barley in spirits.

@Nozinan, I think that if I had been reviewing from a larger bottle, and I had time to observe this whisky at more than one sitting, that it might have opened up a bit more and become a bit fuller. I am looking forward to more experiences with Amrut unpeated Cask Strength.

I like almost everything that Amrut makes. This score of 85, which is certainly not a bad score, is on the lower end of the scores I would give to the 15 or so bottles of various Amruts I have tasted...about half of them with you.

I haven’t tried all of the Amruts yet, but I should make it a life mission to do so. The Intermediate Sherry and the Two Continents are both on my dream team wishlist, but they’re both in the $150+ range. However the CS release isn’t and it doesn’t disappoint. This one is at 61.9% and was bottled in 2007.

Nose: Lovely orange tang, like Orangina. Marmalade on toast. Drying, musty oak. Another reviewer said sawdust; very perceptive. Melons, pineapples, peaches, and big juicy dates drizzled in honey. A very refreshing fruity quality to this to counter the granular woody notes. After a couple of minutes in the glass, the rough edges from the high abv. disappear, and the nose becomes smooth and luscious.

Palate: Salt, marmalade, gentle vanilla, cereal, roasted almonds, leather, nutmeg, light caramel and peaches; all of which cooperate beautifully with that familiar sawdust note. The arrival is gradual with a well-timed buildup, slowly moving us towards a crescendo of fruits and spices (more nutmeg and white pepper).

Finish: Guess what? More sawdust. The faintest of wisp of smoke seems to be just out of reach. Leather. Some juicy peaches reappear. More gentle vanilla. Almonds. Nutmeg. Orange rind and Orangina. A touch of tea. Wow… Long and gorgeous.

CS is almost always the way to go, and Amrut’s no exception. I’ve tried the standard fare and the Fusion. I liked them, but this one outshines both. What I like is that it isn’t just the standard single malt on steroids; there’s more to it than that. The sawdust note is unique and lovely, and it counterbalances the rich, fruity sweetness. I’ve yet to meet an Amrut I didn’t like. It’s a shame that the more premium offerings are so expensive in Taiwan. However, this stuff is both affordable shockingly good. Highly recommended.

@hunggar great review as usual. I tried the 61.8% CS (and yes, @Nozinan, I was also disappointed at the massive drop in ABV) and found it to be quite intense.

They both seem to have the same core elements, lots of nuts and sweet citrus. I missed the sawdust in the 61.8% version. Might have to go back and double check.

I also second the Intermediate Sherry and Portonova - insanely gorgeous the both of them. I like their new single cask offering as well. If you were to pick one I recommend the Bourbon cask. I've done a review of all three.

Tried this from a miniature in December during my Calgary malt adventure. It was excellent. And surprisingly, we found some bottles of the original 2007 bottling later in our journey so I have a couple salted away.

I currently have a bottle of a subsequent batch open, and though the ABV is shockingly lower at 61.8%, it is also an excellent expression. I've heard of batch variation with Fusion, but I've never tasted an Amrut I haven't liked a lot.