Average score from 2 reviews and 2 ratings 93 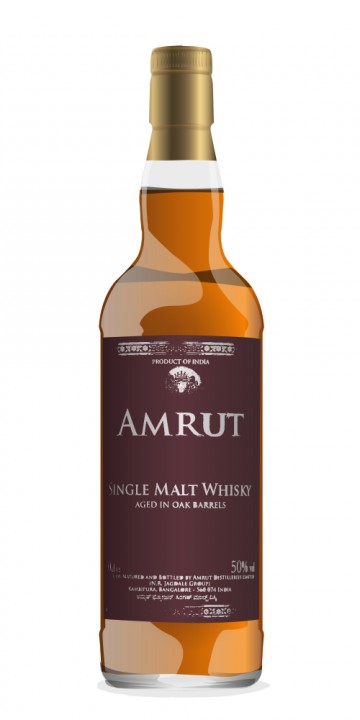 It's called Two Continents because it's been matured in both India and Scotland. I don't know who thought of doing that but they're on to something special here.

The 2nd Edition is slightly stronger than the first (50% vs 46% ABV) and I think that adds to the excitement.

Let's start with the unreal nose. Each visit brings you something new forcing you to almost sit and nose it for hours. I had so many flavor profiles wrestling with my senses I was dazed. It's instantly honeyed reminding you of a ripe fruit stew covered in pudding. There is also a small piece of chocolate drizzled with citrus juice that is just delightfully unexpected. Sit with it for a while and the smell of freshly cut grass grabs you. As your sense of smell eagerly waits for something new someone takes out freshly baked biscuits out from the oven. Finally you are reminded that the one thing that binds it together is fat, juicy barley.

With heady anticipation I let some of it slide over my tongue and it was as if someone had just taken all these aromas and liquified them instantly. As the silky malt explored my mouth it left behind faint traces of oak with pencil shavings strewn around. Then suddenly from no where you're hit with the fiery spice of cinnamon and star anise.

Once you close your eyes and swallow you realize that each component worked harmoniously with each other and made the other great. Possibly one of my favorite malts from definitely my favorite distillery.

Thanks for your comment @SquidgyAsh - I suggest you get cracking and grab your hands on this beauty because Amrut expressions have an uncanny habit of disappearing off shelves in record time. If you can't find the Two Continents I can suggest the Amrut Fusion or the Intermediate Sherry. Also extremely unique flavor profiles.

If you can wait till November then you must source out the Amrut Portonova (that's when they release a new batch - currently out of stock though I have a bottle one me!) - it is heaven in a glass, I promise you!

To read some of my other reviews why dont you visit my newly started blog and let me know what you think maltactivist.com

I have a bottle of Amrut Fusion that has quickly ascended to near the top of my list of favourites. That distillery is on one hell of a roll right now. I hope I can find a bottle of Two Continents before they are gone. Where I am from it may be hard to get my hands on.

The Guys at Amrut Single Malt never cease to surprise, and this new expression is one of their new releases for 2011. Batch #1 was a success, and batch #2 follows , but with some radical changes: different casks havebeen used for the maturation. Instead of ex-grain casks, second-fill bourbon casks have been used this time. The Amrut Two Continents Second Edition has also been bottled – in individually numbered bottles – at 50% abv, not 46% abv. Why two continents you ask? Two Continents refers to the fact that this is matured first in India and then Europe, where climate is drastically different than India’s. Using the finest barley from India’s fertile North West provinces, the single malt whisky is created at Amrut’s distillery in Bangalore, the vibrant city which sits at 3,000 feet above sea level in the tropical heat of Southern India. Four casks of Amrut Single Malt Whisky were shipped from Asia to a secret location in the temperate climate of Europe and matured for a further period of two years. cool eh?

I was fortunate enough to have received a preview sample of this one, which goes on sale start of October 2011. Quantities are indeed small (larger than batch #1, though. with 360 bottles for the US market, and 900 for Europe and rest of the world).

A very interesting dram, at 50% it’s very very good,I’d say more East than west with the spices, vanilla and baklava and cumin. Good stuff, and what a great experiment in maturation. Keep it up Amrut.