Average score from 4 reviews and 5 ratings 83 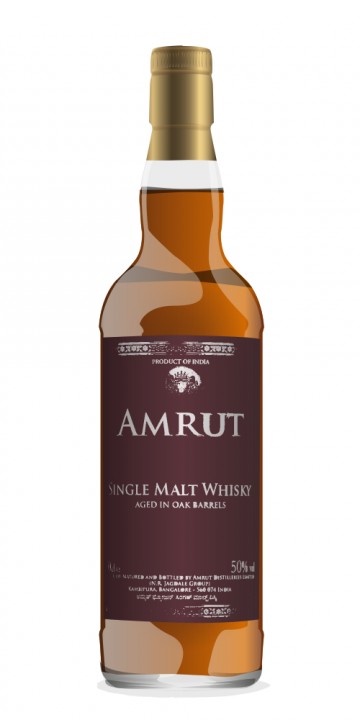 Kadhambam was the subject of a lot of blogs about 2 years ago. In its own way, it was a novelty in the conservative world of whisky raising interest and suspicion. Why? Because Amrut has taken a "Regular single malt" and then raised it successively in rum, sherry and brandy casks. Was it too much? Will the whisky loose its focus? Those were the kind of questions people were asking. There is only one way to answer those, to taste it.

So I will review a dram from a bottle 60% full that has been opened for around a year and as not been attended for more than 6 months. This is bottled at 50% ABV.

First I get orange's highnote, followed by low sherry notes but both leave rapidly and I now have the typical spices of Amrut with a big mint working as the core of this whisky. Vanilla is there as well with its ice cream cone, the regular one, not the sugar cone. Almond then hits you big in a way that makes me think of Frangelico then I realise that is because of the bronw sugar in the background (it is not faint but the mint disguise it). With time, the general impression is one of a spicy coolness.

On the palate, the sherry is more present. The alcohol bites a bit with usual Amrut spices and then I have some blackcurrant buds mixed with the mint. Usually I don't like when blackcurrant buds is predominent (like in many Bowmore) but here it works well. I don't remember that note from the freshly opened bottle. Finally, I have brown sugar in a way that reminds me of Nikka Coffey malt.

The blackcurrant buds fade away leaving the mint and brown sugar lingering with some spices in the back.

This Kadhambam is still good but not even close to what it was. With time, the rum cask had increased its influence and the bramdy cask has almost disappeared. The balance is not as good as it used to be now that some highnotes have left. The high level of alcohol does not carry those highnotes anymore and is therfore too much in the front. So the real conclusion is drink this one in a month or two or gas it.

@Nozinan It is good to know. Usually I find that peaty whiskies and virgin oak finish are flying well (if whiskies can swim in water, they ought to fly with air time exposure). Is it coincidential? I would certainly like to know people opinions.

@Alexsweden Thanks for the comment. A fresh bottle would have been over the regular Amrut but below the CS peated.

There are not many whiskies besting the peated CS!

Nice name, no? Kadhambam! Sounds a bit like an onomatopoeia, but in fact is a word in Tamil, a south Indian language, meaning mixture or combination. According to the backlabel, you will get a combination of rum, sherry and cognac, since the single malt was finished on these types of casks. Yes, I am curious.

The nose is very full and round. Loads of spices like cloves, nutmeg and some cinnamon. Almond paste and cocoa. Some wet wood and pine cones. Toffee apples, blood oranges and green grapes. A midly vegetal edge that makes me think some peated barley was used. And a soury touch undoubtedly coming from the cognac cask. Nice. Even my wife likes this nose and that is saying something!

The palate is a continuation of the nose, but less sweet. Pretty smoky with a drying bitterness. Luckily there is enough fruit and some chocolate to keep things interesting.

The finish is spicy too, but a tad too bitter to fulfill the promise of the nose.

Quite an interesting Amrut, but it tries too hard to be complex, I feel. Too many casks in the mix?

I had this at roughly the same score too, the drying bitter note just being a tad too much for my taste.

Amrut expressions are extremely rare on the ground given their limited runs thanks to a policy of quality and not quantity which we all appreciate. They are also subject to the most cruel levels of Angel's Share thanks to the hot and balmy weather of Bangalore. And so when they released the third edition of this rare expression I just had to get it.

Kadhambam in Tamil means 'mixture' and that's exactly what this malt is. Matured in four different casks - new American Oak, rum, sherry & brandy - it mixes and marries flavor profiles from all influences.

I like the nose. It's restrained in a confident manner. It doesn't come rushing at you on all 8 cylinders yet neither does it shy away from expressing itself. The American Oak announces itself first with a lovely bourbon-y smell complete with vanilla, some chocolate and dry dates. The rum is next with it's caramel and banana. The sherry with it's clove and finally the brandy with a whiff of wild flowers. The subtle nuances coupled with the complex make this quite a nosing experience.

Now the palate I would have liked to fire on all cylinders but the restraint continues. The woody caramel delivery is sprinkled with cinnamon and cocoa powder and completely coats your mouth in a creamy goodness. I hung on for a long time to try and get some more out of it but couldn't. And that's where it loses a couple of points.

The finish is long and dry with the same chocolate, oak and spice setting up permanent camp on your taste buds.

This is not my favorite Amrut but it's a damn fine one. And I have to give them props for not shying away from doing things no other distillery would even dare. Thanks to them we experience flavor profiles we could not have dreamed possible.

Love the name "Kadhambam." Wonderful, unless it is obscene. Even still, wonderful.

So how does this whisky compare to the Portonova?

Nose: Quite unique : Sugar. Pepper. Some peat. Traces of Gin (juniper?) The nose is Quite alcoholic. On second whiff i am getting some chocolate and Damp wood. quite complex, and interesting.

Palate: Oily. Spice and pepper. Bitter chocolate. Kellogg's cereal. Wee smoke. Fruity, but Not as fruity as the fusion in my opinion.

Finish : Vanilla and spice, with traced of peat smoke.