Average score from 2 reviews and 4 ratings 90 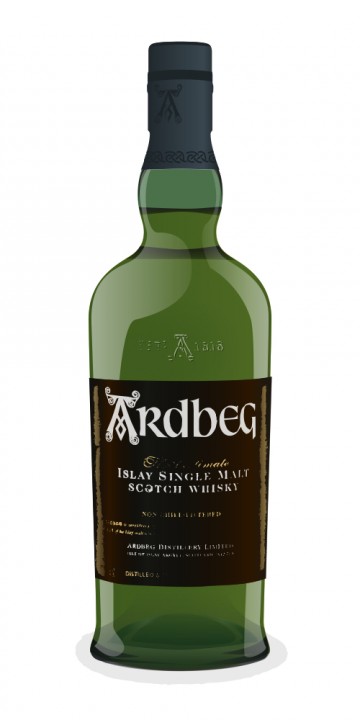 I previously reviewed the Lp1 bottling of Laphroaig - this is the 2nd Elements of Islay bottling I've picked up. Ardbeg is one of the more isolated distilleries, and was actually shut down in the 1980s and only resurrected in 1997 when Glenmorangie acquired it. Elements of Islay is a range of bottlings of Islay malts, each bottle highlighting a distillery and vatting casks of various ages. They are "signed off" by a whisky expert (I still don't quite understand what that means) - in this case, spiritofislay.net founder Gordon Homer.

In the glass this has thick legs and a dark straw colour. The peat smoke on the nose is not overwhelming, underlined by ground almonds and buttered rye toast. Clean and crisp. A little water pushes the smoke forward.

In the mouth: Wow - a fiery burst of peat, maybe a little too much. Hot alcohol with black pepper dancing on the surface. After the first burst, it mellows into a creamy mouthfeel with a very slight light brown sugar sweetness. Water tames down the alcohol burn, but also the other elements unfortunately. Perhaps I added too much, and only a few drops would do the trick.

Long chimney-like finish, it feels wonderful, deep in the chest. Very warming. I would say it's just slightly off-balance but not in a bad way - the smoky peat seems to fight a little with the other elements in the whisky. But it's a very interesting and stimulating dram. Doesn't quite reach the heights of the Lp1 bottling but this is very good. I'm looking forward to the opportunity to pick up more Elements!

palate: Big smoke and sweetness,not complex but very enjoyable in its simplicity

finish: Goes on and on and on

comment:recomend this and the rest of the elements range cl1,lp1,lg1,ar1 to any islay fan you wont find a more intense range of islays anywhere,great fun to drink.Watch out for the port ellen 2 coming out soon i believe but be very quick will be gone in seconds

I really enjoy the Ar2 (though not as much as you) - but my favourite is the Lp1 (though I'm a bit of a Laphreak!)