Average score from 4 reviews and 7 ratings 82 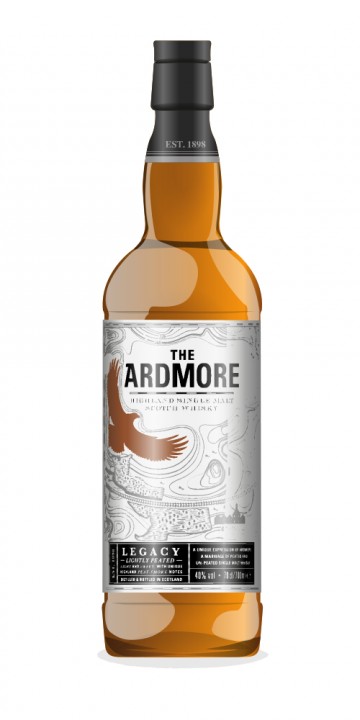 The colour is a bright gold. Lovely peat wafts on the nose, with lemon zest, vanilla extract, fresh pastry, light honey and ginger. Faint hint of cinnamon. The peat becomes a bit smokier with water. Quite lovely.

On the palate the peat is a bit more restrained, with the dominant notes being lemon curd, light honey and more ginger. Silky mouthfeel. A bit peppery. The lemon could be dialled back a bit here, though water helps smooth it out and brings out the sweet malt.

The finish is tart with very pronounced citrus, candied ginger and pine. This is a nice Speysider but there is a bit too much emphasis on the citrus aspect, particularly on the finish where it is almost unpleasant.

OK only two more whiskies in the calendar left! So excited!

@Victor While not among the 50 in my top 10, I did rate Legacy higher than the traditional cask. Surprising as the former is 40% and the latter was 46%.

@Nozinan there remains no good substitute for actually tasting them all for oneself.

In May 2018 I reviewed the Ardmore Traditional Cask. The bottle had been open since 2014. I was not reaching for it often and thankfully @Paddockjudge took the bottle off my hands to make room in a very cramped cabinet. I do not believe I have tasted Ardmore since then. I picked this up in June 2019 in Calgary as part of a discount if you buy three minis.

As this distillery is next up in my Boutique-y Advent Calendar series I’m working on, I thought I would review this one and an IB that someone gave me a sample of on the same day, to get a better sense of the distillery.

The Legacy is said to have replaced the Traditional Cask, but the TC was bottled at 46% and this is 40%. Does it live up to its legacy?

This expression, tasted in a Highland Whisky Glass, is reviewed in my usual manner, allowing it to settle after which I take my nosing and tasting notes, followed by the addition of a few drops of water, waiting, then nosing and tasting.

Peat and lemon. Rich nose for 40%. Marinated green olives. The peat is dry but there is an underlying sweetness behind the brine from the olives. Water does not seem to affect the nose.

Thin on the arrival. The overwhelming flavour is a sweet peat. Maybe a bit of brine in the background. Water makes it a little more bitter and peppery, and brings out stronger peatiness. The olive brine is suppressed.

The peat on the palate masks most other flavours.

I am surprised by this expression. I looked at it and its weak 40% on the label and I was determined not to pre-judge. Turns out I like this one better than the Traditional cask. I don’t think I will buy a bottle of this but I would certainly not turn my nose up at it if offered a dram. At under $50 at the LCBO it outperforms many of its higher priced competitors. If it had a higher ABV this could be a solid performer.

I'm beginning to become acquainted with the Ardmore distillery a bit of late, well some of its products I should say, and find myself with a bottle of the Legacy. Often available for £20 in the UK so not much more than a budget blend would cost - worth bearing in mind!

I picked up a bottle last year and received one as a gift at Xmas so thought it about time I cracked one open to taste alongside the IB SB I reviewed last week.

Nose - dusty, old oak, vanilla, soft smoke and light peat. If you really get your nose in there the peaty tang emerges more. Sweet and lemony. Not quite sherbet lemons but heading in that direction. There's a bitter/herbal note I can't quite put my finger on which isn't that pleasant to me. I have a feeling it's coming from old casks but what do I know? It's certainly not present in the IB.

Taste - lemon pith, malt and a touch of smoke. Thin mouth feel but not watery. Not harsh in any way.

Finish - Yes, it does and quickly! Some mildly bitter tannins.

Adding a few drops of water isn't ideal at 40% but it does help round off the bitter edge on the noseand brings out more of the sweetness on the palette.

So, not a world beater but I wasn't expecting one for the price. It's filling the place of a cheaper blend in my opened stash and at that it does a decent job. Nothing wrong with this but I think it may hang around for a while if you get my meaning?

Also worth noting I've a bit of hay fever/summer cold thing going on so perhaps not at my best.

@RianC The conversation of relative value has taken many forms on this and other sites.

Personally I do not agree with "it's good for its price" rationale.

If it's worth buying, the last question is "can I afford it?"

I should note that I, like many others, have gushed over OGD114 and how great it is for the price. But I think that's different. In that case it is a phenomenal whisky, and it passes the first 2 tests with ease. When it comes to the "can I afford it" question, that's when we se the the amazement that it can be so cheap, because other whiskies of similar quality cost so much more.

@Nozinan Dang it !!! I should have asked you for another sample of OGD 114 !!! It really is a terrific whiskey.

@RianC As for Ardmore Legacy, it is an easy-drinking session dram. I’ve shared this malt on several occasions with my wife’s cousin’s husband (did you follow that?) who likes to keep this one stocked. I’m inclined to think you scored it about where I would (I might nudge it up to 80pts, but that’s me). Definitely worth drinking, but it’s not going to make you re-evaluate everything you thought you knew about whisky, the way Laphroaig 10 Cask Strength will, the first time you drink it. Thanks for the review.

The Armore Legacy is a NAS whisky from the Highlands that was introduced in 2014. You might say it is the follow-up release for the Traditional (although you could say the same of the Ardmore Tradition). It is mildly peaty and was finished in smaller Quarter Casks.

The nose is accessibly sweet on toffee, honey and some vanilla, shows a hint of aniseed and has a mildly smoky edge. You can tell that some peated barely was used, but it is not a peat bomb at all. If you were expecting this, you were misinformed.

It is quite feisty on the palate, to be honest. The peat is a lot more prominent than the nose promised. But it is mostly a sweet pepper party.

The finish is nicely long and reminds me of charcoal that slowly loses its warmth.

Nice entry level whisky for those who are not yet ready for the peat bombs of Islay, but want to take their first steps into that realm. Around 25 to 30 EUR, which is dirt cheap. Thanks, Pat!

You give both this and the TC the same score. I used to semi-regularly buy the TC, as it was a decent scotch with a great price. I haven't picked up this new one, as its weaker and initially costed more (now actually back down $1 less that the old TC). Is this a decent replacement for the TC or is it too weak?

@Taco , I haven't had this new thing, but by all accounts it has much less peat than the Traditional. So even if the quality is similar, like @markjedi1 says, you probably shouldn't expect a similar experience.