Average score from 6 reviews and 14 ratings 85 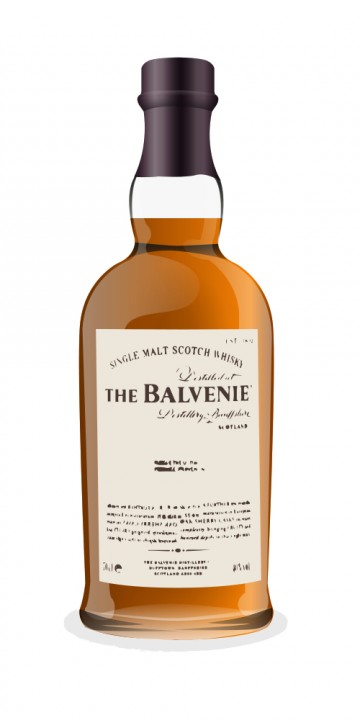 Balvenie by and large do it for me. Good solid expressions. They wave the flag of classic Speyside flavors high and proud for all to see. Dave Stewart, the Balvenie Malt Master, likes to work with different flavors to add that extra depth to his spirit.

Maturations like the 14 year old Rum Cask, the sublime 21 year old Portwood, Single Barrel 12, 15 and 25 years old and this 17 year old with the peated cask influence all cement his reputation as one of the more creative Malt Masters of the Scotch Whisky Industry.

And I'm not even going to mention the cult he's managed to create with the Tun series. I know many a whisky fan simply jonesing for the 1408, 1509 and now the 1858.

However, the one in my hand at the moment is slightly easier to come by and at decent prices. It's maturation is quite possibly one of the more interesting ones that I have come across.

In 2001 a heavily peated batch of barley was distilled and left to mature for some time. Once Stewart decided it was time to move the spirit out else where he was left with casks that had taken on quite a bit of the peated distillate flavors.

So in went some 17 year old Balvenie for a few months to take on the flavors. It was then married with another 17 year old matured in new American Oak to produce this Peated Cask expression.

My expression is from a brand new bottle and served at 48.7%

I think this is quite a fun experiment. The resulting whisky is quite nice. Could it have been better? Sure, why not? Everything can.

@Frost yup, quite an interesting one this. No idea about ppm - absolutely no literature any where or anything on the bottle.

I'm guessing it must be quite low (in the8-10 ppm range). Remember the distillate is not from peated barley. It is only drawing flavors from a cask previously holding peated distillate.

In fact now I wonder whether technically the whisky can actually have a ppm level given that it's only drawn flavor from the cask rather than being peated during the malting process.

What do you think?

@MaltActivist, thanks for a lovely review.

When I see "...17 year old matured in new American Oak...", the first thing I think is IT MUST BE TOASTED OAK. If barley malt were matured for 17 years in CHARRED new American Oak, the way American whiskeys are made, you would would have an extremely difficult time tasting the barley for all of the oak wood flavours. Even with barley whisky, you'd wind up with something like Eagle Rare 17 yo bourbon. One tonne of oak.

Stranahan's Colorado Single Malt Whiskey has demonstrated that you are getting near the limit of acceptable new CHARRED wood oakiness with barley malt whisk(e)y somewhere around the 5 year mark. Climate differences will of course change maturation times somewhat, but you get the idea.

I'm pretty sure I snagged the last (or at least penultimate) bottle of this whisky in Ontario. More on that later. This review is comprised of notes taken over the course of the life of this whisky, which was just over a year.

Palate: smooth, oily arrival; diaphanous pillowy peat riding a soft wave of sugars, followed by oak tannins and spice and then a mild nuttiness and citrus.

Finish: drying; the vey light peat re-emerges along with some sugars, all of which dissolve into a long, lightly tannic and slightly bitter finish.

An overall great whisky. Had I known how much I would have enjoyed this dram I may have been persuaded to purchase another bottle despite the outrageous ~$165 price tag. A great, balanced dram.

Nose slightly buttery with more spice and tannin as it opens up. Warming. Flavours are quite subtle with one single long green note then moving to fresh oak flavours and finishing with a little bit of boozy kick. The peat note reminds me more of moss. Lightly spicy finish of medium length.

Nose: I love this nose. is this a Balvenie? It starts with a nice Smokey aroma. Some kippers, some earthy musty peat, then the sweetness hits you. On top of all this peat floats a little malty sugary (burnt sugar kind of) sweetness. This is sheer beauty.

On second whiff, a certain fruitiness (peach? apricot? ) appears to hover above the smoky fire, now gone. i could be sniffing this little wonder of a dram for hours. this is very interesting. Not medicinal at all.

Palate: We start of with a sweet and malty feeling. creamy, Balvenie style. Some spicy peppery sort of feeling going on in my mouth as well, not spicy pepper, more like Smokey pepper. Butter, cream, oil. viscous stuff. some toffee, and the sugars are not missing.

Finish: Medium, with some cocoa, citrus zest, spices and of course the wee pepper notes, ending on bitters.

A very well made dram. the nose is a-m-a-z-i-n-g, i just love it, the palate is good, but not quite as the nose. All in all, one of the better Balvenies I've tried. Better get going and secure a bottle. not many are there for grabs! (7000 bottles i reckon).

Totally agree with all above. I would maybe add just a bit of wood flavour on the palate. I love "Islay taste", but not at any given moment. With this one we get a great (I dare not say perfect) combination of gentle&rough if I may say so.

Very nice review @Galg. It's got me salivating, even on a Monday morning ;)

I'm an enthusiastic Balvenie supporter--I love their whiskies. I have at least seven other bottlings, most of which are among my favorites. I've introduced a lot of people to single malts, through Doublewood and the 15-year-old Single Barrel release, in particular.

The Peated Cask sounded wonderful to me; I'm a peat and smoke guy at heart. I live in New York State, but Islay is my default page on Google Maps. Port Ellen is my default location on accuweather.com. I have a map of Islay as my desktop background and Ardbeg peat cones to burn when drinking Scotch with my friends. I've crossed state lines to get Laphroaig 18 year old. I love peat and I love smoke. (Mostly I love Ardbeg.)

The challenge in this Balvenie is that this release isn't at all like heavily peated whiskies that I enjoy so much. Rather, it tastes unexpectedly like a young whisky that has spent all of its aging time in brand new, resiny, green oak.

This whisky has strong oaky resins on the palate, which momentarily bury the deep honey notes that are foundational to Balvenie whiskies--as well as everything else. The honey comes through in a bit, and is followed promptly by a blast of dry smoke, a sharp-edged characteristic that lingers for a long time and becomes more dry and sharply smoky as it fades.

My response to the Peated Cask isn't quite disappointment, but more of a sense of the lack of familiar Balvenie elements, whether finished in rum, port, sherry, or just oak casks. It's unfamiliar territory, which isn't a bad thing--but it doesn't charm me like I have come to expect from each new Balvenie release.

I'll still be first in line for the next new Balvenie release. I'll post a review of the Caribbean Cask, and contrast it with the Balvenie 17-year-old Rum Cask in a few days.

@rusk2ua - "I've crossed state lines to get Laphroaig 18 year old. I love peat and I love smoke." Classic! Sounds like the hook from an anthem. I could feel your angst. Very much enjoyed your review.

What an exciting day!!! The Good people at Balvenie distillery sent 10cl sample bottle of their new product for me: The Balvenie 17yo peated cask. It will become available for selected retailers in September for £70. I feel so lucky to be among the first to get taste of this innovative Whisky.

This is what happened: The master distiller David Steward bought some heavily peated barley from local producer. Made spirit out of it and stored it in oak casks. After few years the liquid was transferred to another set of casks. And, here is the interesting thing, usually smoky flavour of whisky comes at the start of proceedings. What Mr. Stewart and his team did next was that they took batch of 17yo. Balvenie, filled the empty casks that had previously had that heavily peated spirit. They left the Whisky there for few months. And end product was highly unusual but excellent tasting Balvenie Whisky.

The Whisky I have been tasting today still has the distinctive honeyd sweetness of Balvennie but with added punch of smoky oak from the casks it was finished. It is one of those that one would feel proud to offer to a good friend. Its unassuming and once you have it in your mouth there is really no need to talk about it as the taste is to such perfection that it explains itself.

You know the feeling when you are with someone you just met and it feels like you two have known each other for ever. Well, that's how drinking this feels. I have only positive things to say about the product.

Thanks for sharing this review. I've had a little nip of this sample tonight too, very subtle and light smokey dram.