Average score from 5 reviews and 12 ratings 87 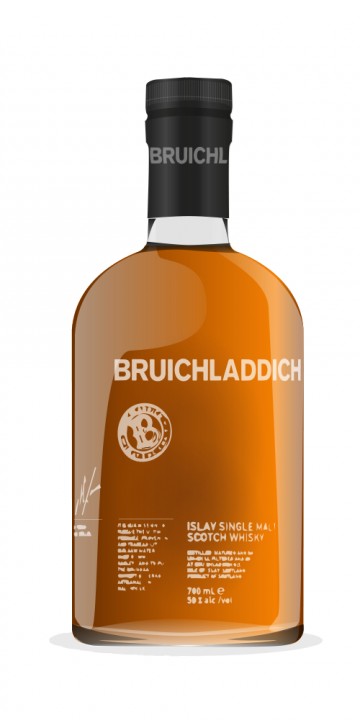 Matured in Juranconian Clos Uroulat (wine) casks from South-West France, this Laddie 18 is not your everyday Bourbon or Sherry matured expression. Its different without forgetting the core flavors.

Palate: a soft, gentle arrival slowly revealing all the different layers. The thick, oily substance carries a wide range of flavors and these are constantly dancing around on the tongue. The first 20 seconds are quite different from the finishing experience, it keeps evolving and transforming. Along the trip I get strawberries 'n cream, brown sugar, eucalyptus, bergamot and chamomile tea, bitter grapefruit, acidic white wine, anis and eventually mocha and milkchocolate. I'd swear this was peated by a small extent, but that taste could come from the peaty water as well.

When trying a whisky I try to avoid reading tasting notes so as to keep a clean slate. Bruichladdich 18 year old, therefore, was able to throw me a curveball. I really like Islay whiskies and although delicious, this bottle had a character that took me by surprise.

Nose: Perhaps unlike other Islays, this seemed a little smoke-less and unpeated. But this allowed the oak to come through fairly strong. Palate: Very pleasing. It was subtly sweet, like cinnamon and apples, or spiced red wine, or salted honey (I don't know if that's a thing, but if it is I imagine it would taste like this whisky somehow). It almost seemed to have the profile of a Canadian rye whisky, were it not for the peaty smoke that lingered in the background just enough to remind you you were actually drinking an Islay single malt. At first my taste buds were conflicted but then they really started enjoying themselves. Mouth: very smooth, not too syrupy or oily. I never really notice much variation in this respect across whiskies, but I would say that if I had to put my finger on it I would describe it that way. Finish: Really quite good. The flavours never peaked nor subsided too quickly and they were all very even throughout. The spicy-ness was almost simultaneous with the smoky-ness, which made for very enjoyable tastes long after swallowing.

I sampled this whisky on the rocks. My first sip was maybe one or two minutes later so some of the ice had melted, introducing some water to the whisky. I feel like this unlocked the flavours better than might have been the case had I sampled it neat. I expect as much based solely on the sniff I had from the bottle, so I will have to try some more to truly make up my mind. It almost seems like a shame to dilute it, no matter how well I think it opened it up.

The ratings I gave this whisky are only detracted by the nose. A really strong Islay I usually smell three to four times as much as I drink it. With this glass I noticed myself only having a smell on the way in for a drink. It's colour and bottle were also not very appealing. These things were, admittedly, minor factors in the overall consideration, but I am a stickler for the softer parts of a dram that make for a complete experience. That said I am willing to give up the colour and nose if that meant preserving the taste I found in that dram. I only raise this to note that I may have bumped up the score for the nose to better reflect what I thought overall. Keep that in mind when taking a look at the scores.

Hardly scientific, I know, but full disclosure and all that.

Bruichladdich is traditionally unpeated, so there's the explanation for the lack of peat.

However, I would strongly suggest that you try it neat - ice does nothing but kill the flavour. That way you can also try it without water first. It should add a lot to your enjoyment of the whisky.

And thanks for the review! I'm a huge Laddie fan, might give this a go!

This is a Laddie that I encountered first at the birthday party of my buddy Jan. The label says Vin de Paille, which literally means straw wine. It is a French wine from the Jura region where the grapes (Chardonnay, Savagnin en Poulsard) dry on straw mats. The whisky matured for 18 years in a bourbon cask and then got a few months to finish in casks of this sweet wine, which immediately explains the amber color with pink hues.

The wine is immediately apparent on the nose. Sweet, red wine with raisins and black, juicy grapes. Some leather and honey. After a few minutes, the wine evaporates (sorta) and typical bourbon traits appear. Esters and coconut, but also graeffe (light brown) sugar. Some nuts. The make it complex, it also offers a trace of smoke and, completely at the end, some sea salt. What a great nose!

It is very oily with a beautiful body. Very spicy too (pepper, cinnamon, thym and ginger) and somewhat bitter from toasted oak, but never over the top. It warms the insides. You can really taste the wine, even though it does not dominate the whisky. Nice composition, which is not always an easy feat with wine.

Only in the long, warm finish does the wine suddenly make it a little too bittersweet with a sourish touch. Pity.

Absolutely one of the better wine finishes. Thanks, Jan. Apparently, there is also a version that has been finished on an Austrian wine.

This whisky goes in 2 directions for me. The first part is really nice, the nose and the palate.

I got some Sherry-like smell in the nose, although this one is not matured in sherry-casks. It's finished in spanish sweet wine casks. There is also some fresh- and saltiness in the air.

The palate again is somehow sweet with dark fruits in the foreground. It is creamy and reminds me of dark jam. At one point I got some honey melon. And there is the taste of nutty wood, a little bit like salted peanuts too.

Then we come to the finish, the part I don't like for this whisky. It's too bitter in my opinion and also sour at one point. Also it is very dry and gives me a coated tongue. That's really no happy end for me.

Overall it is still no bad whisky. You have to try for your own ;)

@Wills- Thanks for the review. I am planning to try the Bunnahabhain 18 soon, so I noticed that you commented on OJK's review of it. Were you referring to the Bunnahabhain 18-- or to the Bruichladdich 18 (which you have posted here)?

Yes you are right, I completely got confused the night I wrote the comment on OJK's review. I was referring to this Laddie 18 ofc. Maybe I was a little upset...

Btw. Mark discovered the same for the finish: connosr.com/reviews/bruichladdich/…

Hope you read Marks review, he gives tons of great info as usual ;)

nose; lots of Apricots...i just cant stop nosing this one! body; light, golden honey...Palate; creme, honey, fudge..i will be buying this one again.love it!