Average score from 2 reviews and 3 ratings 86 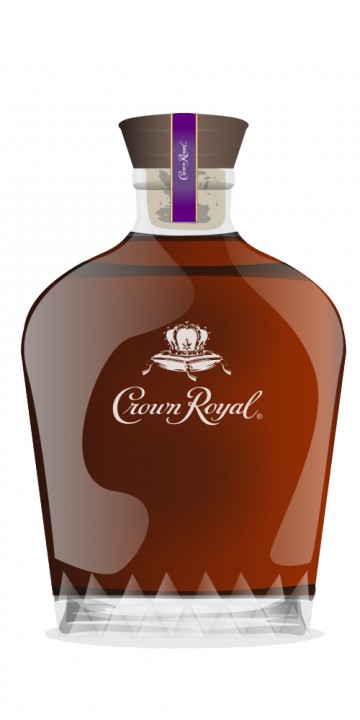 Crown Royal and I do not have much of a history. My first experience that I can remember is tasting the Northern Harvest Rye from a sample (pre-Murray) from @Paddockjudge. At the same sitting I tried the Monarch expression. Neither really impressed me much. I did try some “Hand-Selected Barrel” coffey rye at the Ontario Summit, but I have no notes on it (it was whisky # 32 that day). I think I remember liking it.

LCBO recently listed this limited release. This sample is courtesy @Nelom, from a recently opened bottle. I received the sample a few days ago and opened it today.

This expression is reviewed in my usual manner, allowing it to settle after which I take my nosing and tasting notes, but given that it is bottled at 40.2% no water has been added by me.

Nose: Weak, even covered in the glass for a few minutes. I get a hint of spiciness (presumably the rye) and slight floral note. Not unpleasant but innocuous. 18/25

Balance: The nose is weaker than the taste. I guess they are well-balanced but this whisky lacks a complexity and is quite boring. 19/25

I am not a Canadian whisky enthusiast. I’ve made that clear in the past. More and more I believe that I might lack the discriminating palate to pick up the subtleties of these whiskies. I remain baffled that people I know, FRIENDS whose palates I trust, get so much more out of these whiskies than I can.

But there are some Canadian whiskies that I enjoy, and I’ve reviewed some of them (perhaps more to come in the future). The ones with more complex and stronger flavours seem to appeal to me. So (because I am Canadian) I apologize to anyone who likes Crown Royal and feels slighted by this mark.

The thing is, when I compare this to other Canadian whiskies in the ?$70 range (Highwood 90/20, Forty Creek Confederation Oak, Wiser’s Last Barrels), I really feel the quality just isn’t there. I wouldn’t buy it at any price.

I’m very grateful to @Nelom for this sample, as I am to all those who let me try something that isn’t in my usual comfort zone so I don’t have to buy a bottle that could languish on my shelf for decades.

@Nozinan You know that Canadian Whisky is not my favorite type of whisky either. But I don't think I lack the palate but for me they often are too sweet with no counterparts to give them balance and complexity. I have to add that they are playing with flavors I don't like in my whisky, like Maple! There is two that I realy like: ,Legacy and Gibson 18. I first loved Lot 40, but after afew sips, it is too much. I feel like I am drinking from a bottle of perfume. I don't apologise because I am not blaming them or saying it is not good, I am simply saying that I prefer something else. It is not only my right, it is something on which I have no control, that is the way it is.

So, this was just picked by Whisky Advocate as the Canadian Whisky of the Year for 2016, and in the write-up there's an interesting piece of trivia that I was not aware of:

"A few years ago, when they were making a batch of Crown Royal Deluxe, workers at the Gimli distillery accidentally blended in an extra tanker car of flavoring whisky. Rather than leave an expensive railcar out of service, they transferred this whisky back into barrels to await future needs. In the barrel, new crisp oaky notes, rye spices, soaring florals, and hints of chocolate developed, and so Cornerstone Blend was born."

(I made an identical comment on another Cornerstone review, but thought it worthwhile to post here too)

For Canada Day, I thought I'd post a review of a recently released Canadian whisky. This is the first in a series of limited annual releases in the “Noble Collection”. It is a blend of three whiskies, describes as "a spicy Canadian rye", "a creamy whisky from our unique Coffey still" and a "soft, sweet Canadian Whisky matured in charred American white oak".

Gimli Distillery, where Crown Royal is produced, distills 5 streams of distillate: a corn whisky in a column still, a corn whisky in a column and kettle, a corn-based bourbon style whisky, a strong rye whisky in a column still, and a high rye whisky in a Coffey still. The bourbon-style whisky is shown in Hand Selected Single Barrel, and Northern Harvest Rye - at a guess - is either a blend of the column rye or a blend of the column and coffey rye whiskies. My guess is it's mostly the column rye, because they love to market about their coffey still and there is no mention of it on NHR. Also, the coffey rye is often describes as creamy, and I don't find that particularly with NHR. Why distillers never want to talk about their product beats me; when I inquired more about Northern Harvest this is all I got: "This offering combines the richness of Northern harvest rye grains with the unmistakable smoothness of Crown Royal to create a perfectly balanced whisky." Well thanks.

So this blends spicy Canadian Rye (think Northern Harvest Rye) with creamy Coffey still whisky and a bourbon-like whisky (Hand Selected Single Barrel). You can distinguish both the elements in the single barrel and the northern harvest on this.

White grape and cherry on the nose- typical crown royal! Rich grain, with quite a bit of vegetal rye hanging in behind the corn. Vanilla, arugula, corn bread, caramelized dried apricot, a touch of mint, prunes, and spice – reminding me of morrocan stews or roasts where there is cinnamon, raisins, prunes and dried apricots in the sauce. And creamy. Terrific nose. Though it’s very complex, I’m not sure it quite comes together – the two extremes between the spicy, dry rye and the luscious corn/bourbon-style whisky aren’t quite brought into balance by the coffey still whisky.

The palate is soft, with lots of dried corn and cherries and peaches while having a dry, spicy, and vegetal underside from the rye. It showcases lots of cherry and dried apricot, and typical rye arugula. Finishes in a drying fashion with oak, corn husks, vanilla, prunes, cinnamon, ginger, and clove. The dryness fades and it turns creamy and sweet. Not quite as interesting to me as Northern Harvest, or as moreish and balanced as the single barrel – but very nice. It actually seems like a hybrid of Northern Harvest Rye and the Single Barrel. A lot of these Crown Royal products reminds me quite a lot of Four Roses bourbon products – I imagine lovers of that would appreciate this.

@newreverie I think you made my point with respect to the Booker's.

But you bring up another good point. Just because something is CS doesn't automatically make it good. I had that experience with Arran 12 CS a few months ago, and there was also a significant difference between the Ileach CS and the Bowmore Tempest at the Summit. Similarly Writer's Tears CS was not as good as Redbreast 12 CS.

Interestingly, the better examples in each instance carried age statements.

So I guess in my mind you need two things for a good sipping whisky:

A higher proof does not necessarily make for a better whisky, but I'd welcome the opportunity to verify or disprove this statement through a comparative tasting.