Average score from 1 reviews and 1 ratings 91 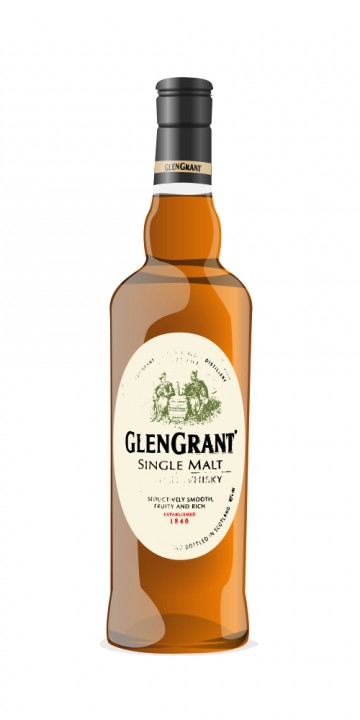 Last week I met up with a good friend for dinner in town. We were going to one of his favorite restaurants, the Print Hall. He loves the food and the staff there love him.

I knew they had a whisky that was almost 60 years old that they let me sample the last time we were there and I knew I had to go back to purchase a full dram.

That whisky was Glen Grant's 1949 58 year old bottled by Gordon and MacPhail.

$65 a shot, but I'm literally going to be trying a whisky that's almost as old as my parents.

So my friend and I head up to the bar and wait until the bartender is free, at which point I order a shot of the Glen Grant 1949.

Can they please put it into a champagne flute. You see they normally serve the whiskies in quite big tumblers and if you're reading this you're probably aware of the fact that tumblers = no good for fine whiskies.

Since they have no glencairns I figure the next best thing will be a champagne flute.

"No worries" he says.

"Shall I put that on the ice for you?" He asks me.

My jaw drops open in horror of ruining a nearly 60 year old whisky with ice. Mind you I'm sure that they get that requested often, but oh my god!?!

When I can finally speak without tears in my eyes I inform him that ice isn't needed.

And that if he ever offers me ice with my whiskies I may have to sell him to aliens for food.

He then causes me to look on in horror as he pours the whisky into their little measure, sloppily spilling at least a hundred dollars worth of whisky down the sides and onto the bar.

Oh sweet baby Jesus is it inappropriate to lick the bar top!?!

After we walk away from the bar with my whisky safely in hand and my friend calms me down explaining that the bartender is a new one, we grab a seat and I start digging into this 58 year old whisky.

It's not as dark as I'd have figured 58 years in a barrel would make it, I'm guessing an ex bourbon cask, but it's just a guess.

This is a whisky that needs to be approached with the utmost of respect, I mean it's not even every month that a whisky freak like me gets his hands on a whisky nearly 60 years old.

I spend the next hour or so nosing the flute, smelling the whisky, tearing it apart and just marveling that this whisky would have been distilled shortly after World War 2 and before the Korean War.

Apples, pears, vanilla, oak, somewhat floral, but nothing over the top.

I'm rather surprised because the last time I had a whisky over 50 years old it was very oaky, which can happen, or to be honest, often happens with whiskies over 30 years old. The oak is present, but it takes a back seat to the apples and pears.

Wow, it just hits me that I'm getting ready to have a whisky that would run roughly $2000 AUS. Probably the most expensive whisky I've ever had.

I take a small sip and sit there with the whisky in my mouth, holding it there for almost a minute, running the whisky back and forth across my palate.

The fruit is present again, apples and pears, but with sultanas also making an appearance, smoke, actually a surprising amount of smoke for a Speyside whisky, charred oak plays a bigger role then it did on the nose and some stronger floral notes stepping up to the plate.

Interesting about the floral notes, at times it's a little too floral for my tastes and at other points it's just right. I'd really like a bottle of this to play around with.

This is the oldest whisky that I've ever tried, the next oldest one being one I'd tried in Melbourne on my honeymoon from the 1950's.

It's an interesting whisky, not massively complex, but also not one that I regret throwing down $65 on a shot of. It basically sets out to do a few things and it does those things well, which is something that I've been encountering in many of the older whiskies I've tried over the last couple years.

It has elements and aspects that I definitely wouldn't expect to see in younger whiskies, coming across as refined or elegant. Sort of like a distinguished gentleman.

Sure, there's just something special about drinking something this old (that's done well, not just any old whisky mind you) and for me it got me into the mood and mindset for Scotland and Singapore.

A bottle of this would be rare and hard to find, running roughly $2000 AUS to pick up.

Is it worth it? Well to be honest on a whisky like this it's much harder to state what it's worth to any one person as usually the $2000 price tag has blown past most people's budgets, but if I could afford to pick it up would I?

But I'd much rather you pick it up for me!

Agreed GotOak91! I know that some people would have just bought a dram of this because it was expensive, I get that, however if they want it on the ice, they can request it.

Kind of funny because they have proper glasses for each and every one of their wines and brandy snifters, etc, yet when I asked them if I could bring in a glencairn they got quite snotty with me (one of the management) stating that why would I want to just smell it? Amusing thing is that this guy is a sommelier who's won awards. Sadly whisky just doesn't have the respect that it deserves in the bartending circles. I've found bottles, worth hundreds of dollars, that have been cooked by the lights that they use to shine on them and it's one of those "Argh!" moments for me.

As for the kind comment about this being a great review...thanks buddy!

Wow and that's why bartenders need to be experienced especially in the whisk(e)y world. Or at least get the head bartender to pour the expensive stuff. That's how it would work in my head anyway :) (Yet there is no such thing as a utopia) Getting out of the rambling rut, this is a great review by the way.