Average score from 4 reviews and 4 ratings 73 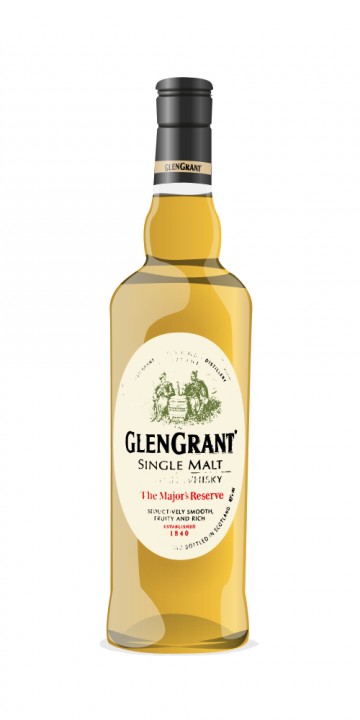 Picked up two of these bottles on special, one of which became the first bottle of my (re)new whisky collection. The other bottle I have opened and drank around a fifth of the bottle.

This review was conducted in a Glen Cairn with no water added.

Taste: the arrival is a biscuity butterscotch and light caramel, that transforms into citrus nutmeg and spice. Fine black pepper arrives late but is quickly calmed by herbs and spring water.

Balance: The highlight is the price and the taste. The minimal nose and unimpressive finish result in an imbalanced whisky.

Being the first bottle in my (re)new whisky collection is nothing to be ashamed of. But having two bottles of this in a collection I feel, would be one too many.

Thanks to a unique Facebook contest, my friends and I won a Glen Grant tasting early 2011. I took a sample of each whisky that was poured and will try them properly now. Let us start with the Major’s Reserve, Glen Grant’s entry level NAS-bottling, named after James Grant. He is of the second generation and passed away in 1931. He had the nickname The Major, was very well travelled and brought back plants and flowers from all corners of the world, thus creating the famous botanical garden at the Glen Grant distillery. The Major’s Reserve is very light and friendly and matured on ex-bourbon casks.

The nose is fresh, fruity and very soft. Clearly young and somewhat malty. Yeast, too. The fruit consists of apples and pears. Hints of vanilla. Absolutely devoid of any other spice. After a few moments, coconut emerges. Nice.

The attack is rather light, almost watery, but soon displays some character. Again white fruit, but now with soft spices and clear hints of vanilla. A bit floral too. Very clean.

The soft finish, on apples (skin included), is rather short.

Admitted, this is a very easy dram, but there is nothing wrong wit hit. A bargain with a price tag of less than 20 EUR.

I picked up this bottle mainly because I saw it advertised for around $45ish AUS dollars. This is quite cheap for a single malt in the land down under, especially for a malt that is not widely known about (well in Adelaide anyhow). I will also admit that a major reason for buying this drop was because it scored fairly well in the 2012 Whisky Bible.

The submitted review is of a glass containing around 2 standard shots of Glen Grant, with 2 teaspoons of water added. The whisky was then 'aired' for around ten minutes.

NOSE: I'm not sure. Sweetness....sugar? perhaps white refined sugars, or maybe icing sugar. Something floral and faint...but admittedly it is hard for me to pinpoint any specific scent.

TASTE: It tastes nice. Its that simple. If you think about enough you may taste light styles of watery honey, diluted marmalade, even sweet butter perhaps. Pale coloured toffee and pineapple & apple fruit juices also arrive briefly at my taste buds.

FINISH: I seriously cannot imagine anyone purchasing a bottle of this whisky for its finish. For my tasting the finish appears somewhere between wet and dry, however one thing is certain, there appears to be the horrid after taste of a certain colouring agent lurking prominently in the background.

Before this abomination kicks in, you may find the finish resembling bicarbonate soda mixed with icing sugar...which may, or may not be appeal to you. For myself, this DOES NOT APPEAL!!!

I feel I have been spoilt by experiencing more often than not, complex, beautifully structured finishes that have made the enhanced the majority of my whisky drinking experiences tenfold. Unfortunately for this bottle, I must honestly say that the finish is most likely the worst I have ever encountered of any single malt that I have ever tried (although I honestly have probably only tried around 25-30 single malts).

BALANCE: The price makes it a worthy buy simply to experience the whisky's pleasant and non-threatening taste. However it is also relevant to point out that the Glen Moray 12 , (which goes for roughly the same price here in Australia), has a much more complex finish and equally brilliant taste.

Interestingly this bottle has me wondering; What is the most important thing in a whisky ? The nose? The taste? The finish? For myself, this makes for a very interesting thought indeed.

seen this bottle at just about every bottle shop i have been to and surprisingly there are no reviews of it on here so i thought i would give it a try. Color is very light, almost looks like its been watered down.

The nose has some very light flavors, hard to pick out but some kind of fruit.

Taste is similar to the smell, very light fruit and nut flavors but no real stand out. This is an extremely smooth whisky being very easy to drink but does have a watered down taste. Probably would have been better if it were a bit stronger.

Finish is kinda short with a real dryness and again with the hazelnut flavor on the top of your mouth.

While it is not a very complex whisky as this is still just my 3rd single malt i do enjiy the sweetness and ease of drinking and think most beginners who enjoy chivas regal will enjoy this and for just $45 its the same price as chivas but in my opinion much better.