Average score from 4 reviews and 5 ratings 82 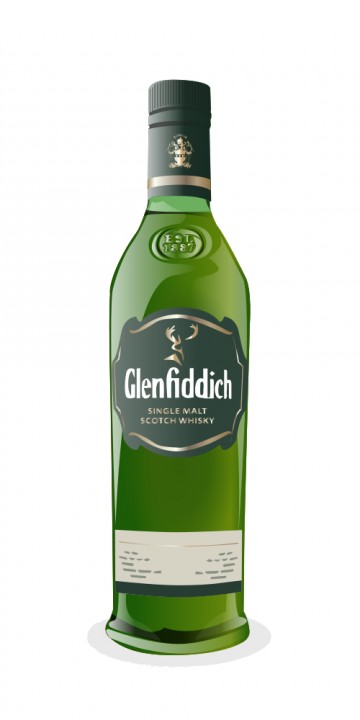 I was brought this by a colleague as a Christmas present.

I don't drink a lot of beer but when I do I tend to go for an IPA so I was a little intrigued by this.

Ralfy in his reviews sometimes refers to whiskies as 'a character malt'. I'd describe this as a 'lack of character malt'. I'm accustomed in my reviews to trying to pick out individual flavours from the swirling complexity of a malt that overwhelms my senses. This is exactly the opposite. As I was tasting it I was thinking. 'I suppose you could describe that as apple'. Trying to pick out flavours from the General meh-ness. It's not unpleasant. It's just you barely realise you've started drinking it.

This retails in the UK for about the same price as the 15 year old Solera vat. The 15 is far and away the better whisky. Hell I'd take the standard 12 over this.

If I had to hazard a guess. I'd say to me this feels like Glenfiddich had a bunch of poor casks that the spirit wasn't doing much in. That they knew wouldn't be good enough for their 12 or 15 year olds so they stuck it in some beer casks for a bit and stuck it out there as the experimental series. Hipsters like IPA beer. Grab that hipster dollar!

Pretty much sums up my instinct around these - same as the Jameson ones. Thanks for taking the hit, as they say; and you never know with these kind of 'one off' bottlings, it might have been really tasty!

@Wierdo Your review is full of potential best quotes on Connosr.  « General meh-ness » and « It’s just You barely realise you’ve started drinking it. » are my favorites.

Glenfiddich introduced the so-called Experimental Series, in which the classic malt gets an extra twist. In the case of the first release, the Glenfiddich IPA, the company asked the Speyside Craft Brewery to create and Indian Pale Ale. The beer itself it not for sale, but was made especially for Glenfiddich. The beer impregnated the casks for several month, after which the cask was shipped to the distillery. Glenfiddich finished its whisky for 12 weeks and this is the result.

On the nose – which is quite spicy – I get notes of vanilla, leather, almonds, chocolate and fresh hops. I had never had the latter in a whisky before, but since it matured on beer casks, that should not come as a surprise. Very pleasant nose, actually.

It is very soft upon arrival, although the spices quickly rear their heads. Baked apples, chocolate and some coffee, but soon a hint of dark beer emerges again. That, of course, was the goal, so this is certainly a successful experiment.

In the medium long finish in which the coffee and chocolate linger, a slight bitterness from the beer re-emerges in a lovely fashion.

A fun and very quaffable Glenfiddich, which is also very affordable. I am a fan.

Thanks for the review, Mark. This one seems interesting, but here in Ontario, the project XX is only about 10 bucks more, and it seems to get more favourable reviews.

@OdysseusUnbound I prefer the Project XX over this IPA myself (see my review right here on Connosr), so I you know what you mean :-)

Glenfiddich has started an experimental series of whiskies, two of which have recently come out. The first one is called #1 IPA Experiment, and was created in conjunction with craft brew expert and brewer Seb Jones of the Speyside Brewery. He made 3 IPAs specifically for this bottling, put them each in casks that sat in the Glenfiddich warehouse, then finished bourbon-cask 'Fiddich in them for three months. The one they selected for bottling was from the "No. 2" IPA (which I believe was made with Challenger hops (whatever that is). It's a beautiful, more contemporary bottle design.

The colour is pale yellow with greenish highlights. The nose is very fresh and young, with underripe pear, green apple skins, heather honey and lemon peel. Grassy. Quite herbal - a little floral as well. The hoppy notes could almost be confused with Orkney peat! A drop of water brings out more hops, more herbal notes and citrus. Very nice but could use more depth.

The finish is very citrusy with mild spices, some dark chocolate and a hint of vanilla. While this tastes like a fairly young Glenfiddich, the IPA cask finish brings out those fruity, citrusy notes. It could use a bit more richness underneath, but is very pleasant all the same. Certainly much, much better than the Wiser's Hopped flavoured whisky (really, there is no comparison)!

For those of you unfortunate enough to read my reviews you know that I have always given Glenfiddich it's due praise as being the giant that truly champions the single malt cause among the fickle masses.

For someone who produces such vast quantities of spirt for them to maintain that level of above average consistency is quite remarkable. I have not yet met someone who has anything bad to say about them. Sure, they might not have the stunners we seek every now and then but I think to be on average above average is no easy feat. And for that they have the tip of my hat.

Which brings me to this interesting new direction they're taking. I like that because they've decided to take the odd risk every now and then. Having been shackled to their core range for the longest time they've decided to step out of their comfort zone and meet the new world head on.

And that comes in the shape of their new #Experimental campaign. This broad direction is taking everything from bartenders with crazy ideas to expressions that push the boundaries. Should some boundaries be pushed is a different matter altogether but I'm in favour of this new attitude in general.

Launched at the World's Most Experimental Bartender competition, which I was fortunate enough to judge, we sat down with Dennis Pankratov, the Russian Brand Ambassador, to go over this anomaly. Matured first in bourbon, followed by 12 weeks in barrels that previously held an IPA and then back to bourbon for another few years. Notice the conspicuous lack of numbers here. Obviously pretty young.

Starts off similar to the 12 year old I feel. Youngish. But at the same time retains the signature green apples and pears that you find in the entry level. The similarity is quite strong. Vanilla. Custard. Also the barley is prominent. Not sure if that's because of the IPA influence. Quite malty. It's not a nose I look for in a whisky but it's enough to keep me interested.

I think the beer influence is stronger here. I don't know if I have a great palate or it's simply the power of suggestion. Again quite malty on the palate. But now with a touch of spice. Peppercorns. That dry ginger that I normally associate with Glenfiddich. Vanilla. Some more custard. Again, not something that's going to blow me away but enough to keep me intrigued. Slightly better with a couple of drops.

What do I think? I think why not. I like it when traditional tries harder. It's a good sign. It reflects in the bottles which are by far the trendiest I've seen in a while (after Compass Box, that is). And the price point of 40GBP is almost a no-brainer. They're obviously appealing to young voters thanks to the IPA touch and chic bottle style. And they're the ones they have to impress. Not us irritating snobs pretending to have lofty standards.

Interesting. These beer barrel experiments are mostly about the effects of hops on whisky, I think, since that is mostly what separates whisky from beer. I haven't seen one yet which was stellar, though some of them are ok, I guess.

Thanks for your review, @MaltActivist.

One of those smaller American brands (New Holland?) makes a straight-up hop-flavored whisky that I've always been keen to try. It's cheap, too ($30, maybe?). As an IPA fan, it should be no-brainer for me. And yet, it always seems a little dodgey.

That sort of unusual "don't you want to try this thing?" stuff really ought to come in smaller bottles.