Average score from 6 reviews and 11 ratings 78 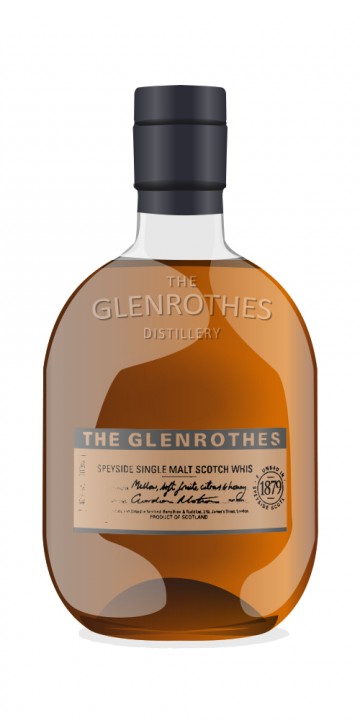 Glenrothes distillery is located in Rothes in Speyside and was founded in 1878 by James Stuart (the then holder of the licence to the Macallan distillery), John Cruickshank (a banker) and William Grant and Robert Dick (both from the Caledonian Bank). James Stuart soon left the partnership due to financial difficulties, but the other partners carried on as William Grant & Co. (not to be confused with the William Grant who would later build Glenfiddich distillery). In 1887, Glenrothes merged with Bunnahabhain to form Highland Distillers and early on was recognised as top-class blending material, its most notable destinations being Cutty Sark and The Famous Grouse. The overall history of Glenrothes is rather unremarkable and not much changed over the years except for the occasional damage because of fire, followed by the regular expansion of stills to its current number of 10 in 1989. In 1987, the Glenrothes' long relationship with Cutty Sark brought it into the portfolio of London wine merchants Berry Brothers & Rudd (which owned 50% of the Cutty Sark brand). Berry Brothers & Rudd in turn sold Cutty Sark to Edrington in 2010 in exchange for ownership of The Glenrothes brand. The distillery itself remains part of Edrington and the Glenrothes plays a significant role in the firm’s blends as well as those from competitors. The Glenrothes Robur Reserve is named for the Latin name for Spanish oak, Quercus Robur, and was matured in first-fill ex-sherry casks. It is available as a travel retail exclusive.

The nose is light and fruity with flavours of honey and lemon zest, followed by a hint of oranges. Later on there are notes of dried fruits and a touch of leather.

The palate is light-bodied and spicy. Lemon and honey flavours are back, together with malty notes and plenty of vanilla.

The finish is short and spicy but pleasantly warming. Again, lemons and oranges are there, this time accompanied by notes of caramel.

This is fairly light stuff, in fact a bit too light for my taste. It is really easy-drinking and the impact from the maturation in first-fill ex-sherry casks is less pronounced than you would expect. A typical travel retail exclusive item.

That could certainly have helped, @Victor, and might have pushed it above the 80s line. What this one is badly lacking, in my humble opinion, is body. In fact, I am quite fine with the flavour profile .

@Pandemonium, I once had the opportunity to taste a 43-year old from 1969, from The Macphail's Collection. That one was absolutely stunning, outstanding! As for what is available today in the "core range" I tend to share your sentiment.

This one is heavy malt and sherry, similar to a cross between Glengoyne 10 and Glenmorangie Quinta Ruban. The bartender who suggested this one even agreed with my quick evaluation. This is a good malt, but there are so many others out there with a similar profile that are cheaper and easier to find. I will go to the ends of the earth to find truly exceptional ones, but not this one.

Bedlington Malt Whisky Society sampled this bottle on the 14th of November 2012. After we had sampled a bottle of Glengoyne 12 Year Old Cask Strength... Massive difference!!
With palates properly cleansed, and glasses rinsed we popped open this bottle.

A very easy going whisky, and very drinkable. Suits some good food, and good company. If you get a chance to try it, go for it!!

A bottle gotten from duty free The nose is wonderful, fruity and vibrant,sweet, light banana toffee, a lovely speyside nose. Palate is light, it however only goes as far as confirming the nose with no other surprise or complexity. Finish is short. Overall, its very very pleasant whisky, a great dram for before dinner or in front of tv. but the nose really outperforms the body. May be use it also for aftershave?

Compliments of Dad, visit to Sheffield. A slightly subdued bourbon aroma, very little alcohol or harshness. Smooth, not overly complex, caramel and alcohol come through. Quite nice, relaxed, although not extraordinary.

Not bad, although it won’t blow you away. Really mellow and easy-going, but less sherry than you would expect from first-fill casks. Anyway better than the Glenrothes Select Reserve, at the same price.