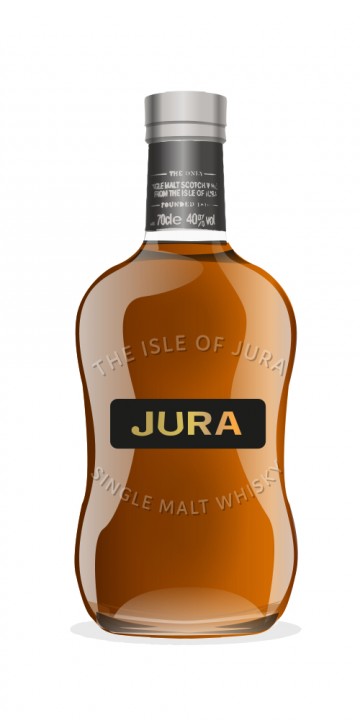 It has been way too long since I last tried a whisky from the Isle of Jura. So let me go for the big guns and try a 30 Year Old that listens to the name Camas an Staca, which means as much as Standing Stones. It refers to some of the ancient stones spread over the island. The whisky matured for 27 years in American oak and then got a finish for three years on Spanish sherry casks.

The nose is deliciously fruity with loads of different sorts of grains and nuts. Let us call is muesli: raisins, apricots, coconut, pomegranate and banana. Some smoke lingers in the background. After a few moments it even smells a bit fatty. This is great!

It is oily and sweet, but immediately also turns somewhat umami. Smoked meat? Some pine nuts on a bonfire. Nice spiciness with black pepper, liquorice and a hint of cloves. Midpalate the fruit returns, keeping the oak at bay. Big influence of sherry.

A nice smokiness and some spices return in the medium long finish.

Great and complex Jura. A bottle will set you back some 350 pounds, though.

A brand new Jura is announced today, and this is the first ever review of it( i got a sneak preview)

The new expression is called Called the Standing Stone, or ‘Camas an Staca’ in Gaelic, the new expression takes its name from the largest of Jura’s eight standing stones. Known as ‘The Bay of the Protecting Rocks’ this imposing 12 foot obelisk is reputedly all that remains of a stone circle laid some 3,000 years ago by the earliest Diurachs to appease the spirits.

The iconic Jura bottle is presented in a beautiful display case that opens its doors to showcase the bottle and reveal the story of the whisky. Meticulously detailed, the bottle is in-filled with copper wax, with a matching metal plaque.

Jura ‘Camus an Staca’ will be available for purchase in selected whisky stores across the world from December ( in time for Xmas!) at RRP £350 per 70cl. Not cheap, but I guess Jura lovers and collectors are really the target audience here, and not the average Joe. I bet you are eager to read how it is, so here are my tasting notes, First ever tasting notes of this baby on any whisky blog. So don’t forget where you read it first! this baby is going to be released only in mid December, just in time for Xmas, which is the burning season for all things whisky.

Nose: Starts sweet and creamy, with a hefty amount of Tangerine juice, thick caramel candy, vanilla, wood resin, old library bench wood spice, and a certain exotic fruit touch to it, ripe melon nectar , and a twist of red apple peel. add a sprinkle of sea spray only fitting for an island dram like that, and you get a voluptuous nose. Crisp, sweet, and inviting. This is even sweeter than I remember when first tasting the cask sample. yummy.

Palate : Need to give this some time to caress the palate, as R.Paterson suggests, a second for every year of maturation before you swallow, but I admit I was too eager to swallow this and could barely wait the 30 seconds. So, what do we have here? Those oranges and Tangerines make a big entry here, as well as dark chocolate, with cocoa powder on top. Toffee candy the old style, with a thick feeling to it, sugars, vanilla, spicy and semi sweet cherries, and plenty of sultanas and prunes at the very end, finishing rather spicy and woody. clearly some sherry influence there. the texture is viscous and you would be surprised this is bottled at only 44 % abv as it feels much thicker and fuller on the palate.

so, was it worth waiting that long? I think it was, and these things should not be rushed especially when speaking of those premium whiskies which need to be presented properly. It’s a cracking whisky, and it’s really a pity that not everyone will be able to afford it. I do hope Master of Malt or some other company that bottle whisky by the dram will pick up the glove and allow as many people to have a go at this wonderful stuff. And another word for those who buy it : It’s great, it looks amazing, but it’s also meant to be enjoyed, drunk at special occasions, with good friends, and family, so please do not just collect, do enjoy it, when you think it’s most fitting to. Drink, do not collect, enjoy whisky as it was meant to be enjoyed. OK, enough whisky geekery from me, and now back to Jura.