Average score from 11 reviews and 36 ratings 80 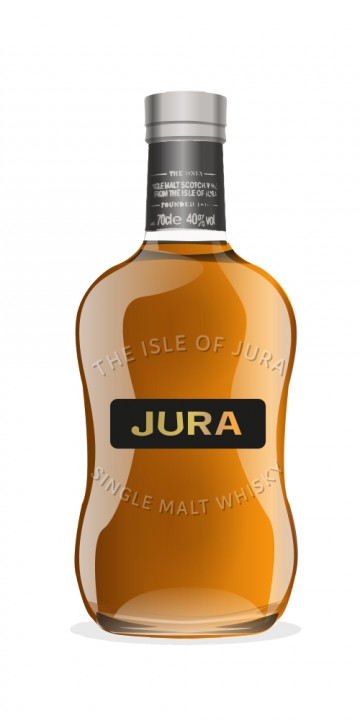 Not as spicy as the usual Juras. Rough but good, pretty straight forward dram with some character. Bit of a fruity whisky as well.

In a way, Jura Prophecy reminds me of young Clint Eastwood. And "For a Few Dollars More" really comes to mind, when you start to compare this to Superstition or the 10YO Jura. You really get a better whisky in Prophecy, just by investing a bit more.

Nose: Peat dominates with smoke in the back. Some phenols and hints of lemon zest. Bit sweet. Water adds floral notes.

Balance: Non-complex whisky, that's nicely good. Even better than the 16YO Jura (though I scored the same for it but still...)

@Rantavahti, thanks for a nice review. "For a Few Dollars More" is a great favourite of mine and a hard movie metaphor to live up to, in my book.

I had some Jura Prophecy just the other day and enjoyed it very much. I think that mood was just right for it at the time, like the mood to watch "For a Few Dollars More".

Thanks @Victor, and that's true – a great movie. And if I may say seriously, much better than a 85 point whisky. But felt like a clever transition in my review, though.

Prophecy was a positive surprise. I really didn't expect much from it.

The label says it’s been profoundly peated whatever that means. Sounds like marketing claptrap to me, but lets see what it’s really like.

There is something really different and dare I say it profound about the nose on this malt, and it’s not exactly peaty. It’s more like a slightly burnt fruit cake, rich sweet molasses, slightly smoky, and fruity, but the intensity is superb.

On the palate it's full bodied and in quite a different class from anything I’ve sampled from this distillery before. Slightly smoky, toasty even, softly peaty with some pine, cocoa and coffee compete in a really delicious mouthful. Quite a sweet finish, not overly long but lingering bitter chocolate make it very satisfying.

The first Jura I would heartily recommend, not exactly a peat monster but the peating (profound or otherwise) has brought a lot of toasty rich sweetness that make this a really tasty dram.

Isle of Jura Prophecy is described on its label as "heavily peated with fresh cinnamon and spicy sea spray". Are those literal additives? I do not know, but I suppose that they must be. Many thanks to @WhiskyJoe for giving me the last 1/3 of this reviewed bottle. I do not know how long this bottle has been open. The bottle label states, "Limited Annual Release Year I", which I believe was 2009

Nose: "heavily peated" here translates to moderately peated, by next-island-down-Islay standards. I smell toffee/caramel, malt, yes, a bit of cinnamon, and some background briney/medicinal "spray". I notice strongly that this malt noses much better when not in a long line of strong drinks. Taken on a clean palate this is a nice nose, but it still has markers which suggest artificial doctoring, eg via the addition of caramel, which is most definitely tastable

Taste: the nose flavours are translated to the palate, with additional sweetness, and more pointedness to the peat flavours than in the nose. This is not bad flavour here, but, as with the nose, something just tastes artificial. The toffee/caramel element is a relative detriment to the overall taste

Finish: fades a bit at first, then goes relatively long, ending on a balance of sweet and bitter

Balance: this is a malt to which I was really looking forward. Taken in a line-up of quality peated drams, Prophecy looks like a weak sister, but by itself it is nice enough and certainly has its good points. This bottle seems to get more flavourful with air. If you sample Isle of Jura Prophecy with modest expectations, you can certainly enjoy it. Don't expect fireworks

"Has its good points... don't expect fireworks." - That's a great slogan for the brand as a whole!

I wasn't very taken with this one either, and its definitely not "heavily peated" by today's standards. With peat in such demand these days and an assortment of CS Islays readily available, I think Jura should reconsider their marketing for this one. In fact... there are quite a few things I think Jura should reconsider. The phrase "unrealized potential" comes to mind.

Thanks for another good one, Victor.

@Pandemonium, yes I suppose SWA would not allow them to call Prophecy "Single Malt Scotch Whisky" if it had actual "fresh cinnamon" or "sea spray" additives. Personally I consider it stupid as hell for them to list "with fresh cinnamon and spicy sea spray" in exactly the same location on the front of the box in which one would list such things if they were actual additives. As for tasting notes, to me 90% of them are bunk.

This whisky is truly awful in my opinion. It is the first and only whisky (or any alcoholic beverage) that was so bad that I took it back to the store and requested a refund. The unpleasant taste and smell was so overpowering that mixing it wouldn't even be a solution.

It had a very strong rubber, mud, dirty sock, peat/grass, and old leather smell and taste to it. I was hoping it would be more smokey (like it said on the box) but I didn't notice it (Maybe I received a bad batch).

If you like the smell and taste of rubber, mud and dirty old leather, then you might like this. I thought this was the worst whisky I had ever tasted.

Nose: The peat evolves over several minutes. At first cherry and chalk; then just chalk, becoming tar, and softening to rubber and an earthy backyard pile of dried autumn leaves and grass. A soft and almost creamy orange opens up underneath. The final overall impression is not too complex: medicinal rubber with pale orange pulp.

Finish: Chilis from the grill, their skins blackened and flesh sweetened; fades to chalk. Liquorice hangs on all the while, in back of the mouth. Interestingly, 1 minute into the finish you may taste saffron exhaling through the nose.

Not my preferred set of flavors, but still balanced enough to enjoy. Compared to the Superstition, the Prophecy is richer and sweeter; and the extra 'bite' makes it harsher but more interesting.

I don't really have too much to say about the Jura Prophecy- it had a nicely peaty smell that also contained a heap of sea salt and light smoke, maybe some trees in the distance, like a fresh breeze coming in after a storm. The taste was a bit peppery/oily, and pretty subtle compared to the nose, with a similar finish.

I enjoyed the Jura Prophecy more than the Jura 16, because the 16 didnt have nearly as much smoke/peat, but I would still call the 16 the more interesting Jura. That rubbery orange is much more unique, and memorable. the Prophecy is absolutely worth trying, but I'm not sure I'd buy a bottle.

The Prophecy is inspired by the (true?) story of an old and wise fortune teller, who predicted the downfall of the Clan Campbell. This clan ruled the Isle of Jura at the start of the 18th Century. It is a profoundly peated – according to the label at least – whisky, that did not suffer from chill filtration. It is coloured, though. It was finished on a sherry cask from Gonzales Byass. It first appeared in 2009.

Like with the Superstion, the nose on this Prophecy is rather uneventful. I have some stable scents, cowhide, tar and mild spices like nutmeg and aniseed. It takes a few minutes for the fruit to show itself. The dried version, undoubtedly the sherry cask influence. Caramelized oranges, hint of choclate. The peat is indeed more prominent and rather pleasant. Nice development if you give it the time it deserves.

It is pretty oily and shows quite some peatiness on the palate. The fruit now reminds me more of apples and pears. Quite nice, actually. Midpalate, it turns dry and peppery. A salty touch makes up for a lot. Towards the end I get some citrus. Think a slice of lemon that has been drying a tad long in the fridge. A lot of licquorice and cinnamon.

The finish is clean and turns your mouth completely dry. Peat versus licquorice.

Yes, this is good stuff. I will have another one, thank you. Nice Jura!

Huge smokey dram. Well worth a test run if you like fire in a glass.

Nose: good integration of the sherry and the peat. There’s smoke (burnt leaves) but it’s not as profoundly peated as I would have expected. Slightly tarry and even some medicinal notes. Everything’s rounded off by dried fruits, hints of cinnamon, nutmeg and oranges. A bit uncommon as a whole, but very enjoyable. Mouth: much more peat now. Starting slightly sweet with fruity notes but soon getting (a lot) drier and spicier (pepper, cinnamon). A good deal of smoke. Overall punchy and clean. Finish: dry smoke coated with liquorice and spices. Medium length.

I dont know about the Superstition getting a 'slagging.' I haven't had it, but it does sound to me like one of those malts that is so unique, it tends to divide opinion - some will love it while others aren't convinced. Have a look at the responses to Jean-Luc's review of the Superstition, you'll see what I mean...

Ooh, is this new? Despite the round slagging it get's on here I'm a fan of their Superstition. I'll need to seek this out. It is the festive season after all.

I much prefer the Superstition to this. To me it's like 50/50 Jura 15/Superstition.