Average score from 5 reviews and 6 ratings 83 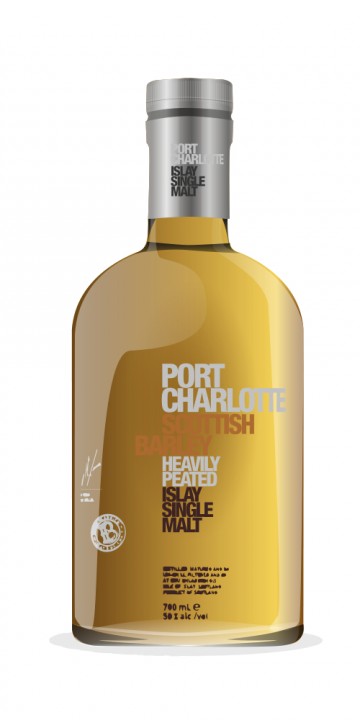 There was actually a Port Charlotte Distillery on Islay until 1929, but she closed as Prohibition in the States became a fact. Today, Port Charlotte is produced at the Bruichladdich Distillery This PC7 was launched in 2008.

Loads of peat on the nose, but also white fruit, coffee and, just like the PC5, surprisingly soft. Quite buttery, in fact. Adding water brings out the herbal side. Then it is all about sea breeze and cow stable. The sweet peat turns into a wonderful smokiness.

The attack is powerful and all attention goes to the sweet peat. Loads of pepper, nutmeg and liquorice. Then finally a slice of pear. Adding water changes this one considerably. Loads more silt, liquorice and even ashes, but no more fruit to speak of.

The finish is long and a little salty, on ginger and liquorice.

Very sturdy PC, but the least complex in the series. Adding a spoonful of water makes it more interesting.

Pouring straw to light gold, ridiculous thin, widely spaced tears with powerful formation. Nose up front is much too boozy near flammable. Needs to seriously decant for 10-15 minutes. Volatiles settle down and express rich honey, chamomile, bacon, richer Ardbeg type smolder, sea salt, and loads of fresh floral complexities. Really amazing. Taste up front is a tad hot from the 60+% abv but actually still drinkable without any cut. Honey, herbal tea, grassy meadow medley, salted bacon all meld together. Super rich and statisfying. The $150 price tag makes it less accessible than top Ardbegs it seems, but there is some elusive complexity in this Scotch that I don't find in some of my favorite Ardbegs. It really is a journey to explore this one. Can't wait to see how this matures over time.

I'm with ya...this one is special. They add sherry cask to the PC 7, not for sure if that's the elusive nuance amongst the blast of peat and smoke. Nice review!!

Nose: Upon encountering a young, heavily peated Islay whisky, one may expect to find certain characteristic flavour notes present on the nose, and present they most definitely are here. However immediately upon first nosing of this PC7 it is clear that this is unlike any other whisky nose we may have encountered before, let alone any Islay nose. It is a certain meaty quality to the aroma that immediately leaves us disorientated, almost forcing us to recoil. Mercifully however, as the whisky is left to sit for a moment, the peculiar notes of raw lamb mince slowly smooth off from their initial sharp delivery. More specifically it seems to be a raw lamb mince wrapped in cellophane, then marinated in windscreen wiper fluid. Indeed this nose is as hard to fathom as it sounds. As we bravely dig deeper underneath these alien notes we find some more familiar friends in the shape of toffeed seaweed, salted almonds dipped in caramel, vanilla double cream, and finally fresh pomegranate nestling on a bed of mossy wood. As we go in for another approach however, the cellophane-wrapped lamb mince seems to have given way to a slightly different (although no less jarring) meat-influenced note, notably pepperoni and jalapeno flavoured pizza. It sadly feels a little like experimental cuisine gone wrong. 1.5

Taste: On the palate, normality seems to be once again restored. Although perhaps it would be a little harsh to describe this as normal, perhaps I should in fact qualify it as being a palate void of the influence of meat. I say harsh as I suppose firstly who am I to say that raw meat notes aren't perfectly acceptable, and also secondly there is nothing normal about the velvet-like delivery of candied apples, toffeed tangerines, spiced almond brittle, and seaweed soaked in molten brown sugar. A luxurious tongue massage courtesy of Bruichladdich. 2.5

Balance: I feel a little lost. This is most certainly a very fine whisky, one can feel it in its construction, in it's depth of flavour, and in its luscious delivery on the palate. However it's on the nose that I'm afraid it somewhat loses me, and I regret not being able to fathom it. Conceptually speaking I'm very much in favour of unique and clear flavour notes, these are what make a whisky stand out from anything else you may have tried. Normally I would even applaud such flavour notes even if they weren't totally to my everyday liking, just because I feel that's what high-end whisky should be trying to do. Sadly though in this case, the extremity of certain flavour notes on the nose leaves me somewhat alienated. Once you pick up the scent of raw lamb mince, it's very hard to shake it off. Unfortunately therefore I find this whisky adding up to slightly less than the sum of its unarguably sophisticated parts 2.0

Definitely an Islay. The alcohol hits you first off, then peat dominates. Sweetens towards the finish with hints of caramel. Very smooth.

sounds good, i recently tasted the PC8...very peaty (but it put a smile on my face)!

Tingles on the lips first off, but runs down fairly smoothly. Full on the noise and peaty. Enjoyable! Hits you with the Alcohol and leaves you dizzy for more.