Average score from 2 reviews and 4 ratings 93 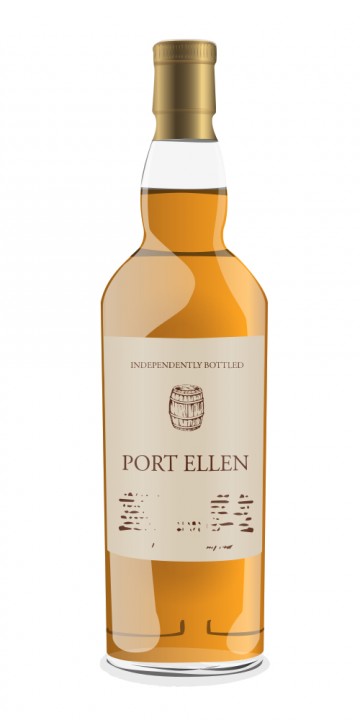 Port Ellen distillery was founded in 1825 on the southern shore of Islay by Alexander Kerr Mackay. Between 1825 and 1836 ownership of the distillery changed a couple of times, but after John Ramsay was granted a lease on Port Ellen in 1836 it was operated by him and his descendants until the distillery was sold to the Port Ellen Distillery Co. Ltd. in 1920. The ownership of the distillery saw a few more changes before it was mothballed by Distillers Company Limited (DCL) in 1930. No whisky was distilled at Port Ellen for almost 40 years, although the maltings and warehouses that belonged to the distillery remained in use throughout this period. Production resumed in April 1967 after the number of stills had been doubled from two to four. In 1983 the distillery was mothballed and closed permanently in 1987. However, the drum maltings that were installed in 1973 are still in use and continue to deliver malt to all Islay distilleries (and a few others). In 2001 Diageo began releasing one official bottling per year. This is the 10th annual release of 2010, a 31-year old from 1978.

The nose is surprisingly light and slightly phenolic. Flavours of lemon, vanilla and smoked ham develop next to each other, followed by very soft smoke. Water brings out more fruitiness (lemon, apples), and after a while the most delightful smoke develops. A rather complex nose but superbly elegant at the same time!

The palate is medium-bodied, oily, and lightly spicy, with the lemon flavours now more pronounced than on the nose. Vanilla again makes an appearance, before the whole palate turns salty and grassy. Smoke is there, too, but now takes on a slightly ashy character. A great panoply of flavours, combined to a masterful ensemble!

The finish is long and warming. Lemon and vanilla mingle with smoky and ashy notes.

This is a phantastic single malt, absolutely stunning! The nose was complex yet absolutely elegant, and the multifaceted palate ticked all the right boxes. Simply great, great stuff!

Nose: exactly the kind of Port Ellen I like. Peat as a supporting act rather than a show stealer. Quite coastal and sooty, but in an elegant way. Subtle candied notes, a little honey, yellow apples… some vanilla… sweet almonds… Lovely wax as well. Now that I think about it, I adore waxy notes and they’re missing in too many Port Ellens but here it is! Bonus point. Faint medicinal notes as well. Traces of cured meat (cecina de León). Very complex and so smooth! Stunning.

Mouth: again it doesn’t come rolling in. Starts sweetish and spicy before going to salty, kippery and herbal notes. Quite medicinal and ashy now, with sharp lemon. Perfect development, with a crescendo from rounder notes to sharper elements, as if the nose was meant to mislead us before showing its true character. Again wow.

My first impression was to put this on the same height as my (so far) favourite Port Ellen 7th release. That one shows more emphasis on floral notes and vanilla, but both share a mix of feminine and masculine Port Ellen, if you know what I mean, and these are the most beautiful expressions in my opinion. After a direct comparison, the 10th release is wider and more complex, as well as a little more typically PE, so it deserves a higher score. We have a new favourite.

This is me, sitting over here in the corner. Being jealous... :p