Average score from 1 reviews and 2 ratings 91 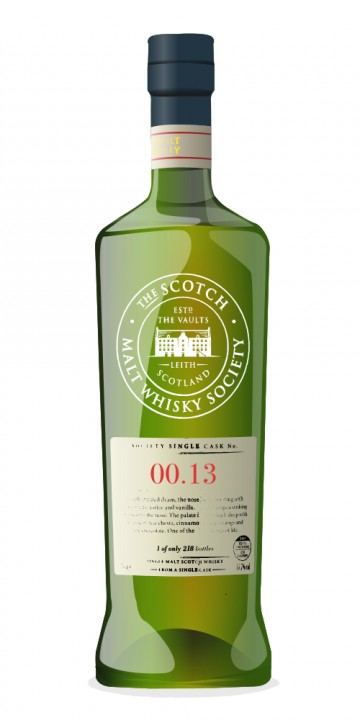 This is a special bottling I came home with from a Scotch Malt Whisky Society tasting I attended recently.

If you don't already know about them you check out www.smws.co.uk

To cut a long story short they get whiskies from distilers which may be slightly "off-brand" but are none the less worthy drams. Because the bottle labels are SMWS and the whiskies numbered rather than named the brands don't have to officially associate themselves with the contents of the bottle. It adds to the fun.

You only have to look at, and smell, 33.79 to know its an Ardbeg. Very pale with an initial hit of smoked almond on the nose giving way to vanilla and jam which brings back memories of school canteen puddings.

On the palate: if you've tasted other Ardbeg whisky you're going to recognise the controlled peatiness and slighly medicinal flavours but those vanilla and jam notes you picked up on the nose are here in abundance. And something else, a creaminess which seems at odds with the pale colour of the dram. A long complex finish wrapped up in that rich texture lingers in the mouth for some time.

At 55.3% it packs a punch and there is certainly an up front burn. The dram stands up well to a couple of drops of water which really helps to release that creaminess. Having said that if you're in the mood its great without water too.

Why Ardbeg wouldn't want to put their name to 33.79 is beyond me, this is a terrific whisky. My only regret is that, as 1 of 235 bottles, once this one is empty I'll never taste it again.

Limited edition whiskies - even more reason to treasure every drop!